Spider-Woman soon arrived in Washington DC and met with Val Cooper, who told her that she was willing to give her another chance. Spider-Woman announced that she couldn't work with Freedom Force again, to which Val told her that she won't have to. Instead, while to the world she would still be a fugitive, she would really be working as a special undercover operative under her direction. Her only other option, Val told Spider-Woman, was for Freedom Force to arrest her and spend fifteen to twenty years in the Vault. Reluctantly, Spider-Woman agreed to work for Val, who promised that if things worked out it could be a short-term arrangement and she could soon get back to her daughter. Val also warned Spider-Woman that even her new friends the Avengers 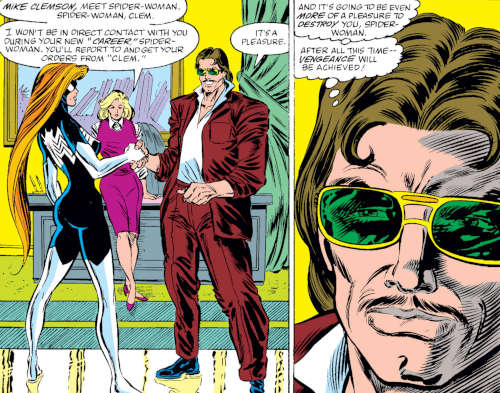 couldn't know about the arrangement. It was then that Spider-Woman was introduced to her “handler” Mike Clemson, as Val would not have any direct contact with Spider-Woman while she was undercover. Little did Julia know, however, Clemson had a long grudge against her and intended to use his position to destroy her. [Iron Man (1st series) #214]

On an assignment for Clemson, Spider-Woman broke into a Dextron laboratory in search of a computer disc. She was searching for the disc when she noticed the Wrecking Crew, whom she 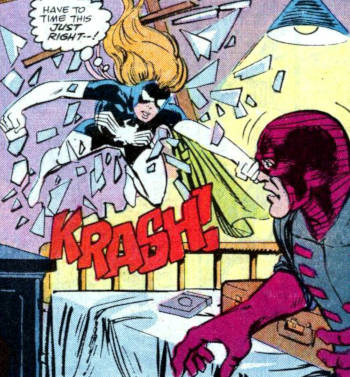 remembered from Battleworld, had broken into the lab as well. She watched them from the shadows and discovered they were also looking the same disc as she was. Just as they located it, Spider-Woman grabbed it and attempted to escaped, but was not quick enough for Thunderball, who knocked her out and recovered the disc. Fortunately for Spider-Woman, however, the Crew feared vengeance from her “hero-friends” if they did her harm and left her alive. Knowing that Clemson could make her life miserable from a failure, Spider-Woman tracked the Wrecking Crew to Manhattan, where her search led her to the Wrecker. When she spotted the disc on the bed of his hotel room, Spider-Woman knew she had one chance and burst through the window and grabbed the disc.

Spider-Woman found herself pursed by the Wrecker. Their battle was joined by Spider-Man, who in his civilian identity of Peter Parker had been instructed by J Jonah Jameson to get photos of this mysterious new Spider-Woman, who was to the public’s knowledge still a wanted criminal. Despite their time together on Battleworld, Spider-Man at first believed Spider-Woman and the Wrecker to be in league with each other, but quickly realized this was not the case when she prevented the Wrecker from delivering a powerful blow that could have killed him. The whole

mission went south when the disc was destroyed. Spider-Man suggested that they team up to capture the escaped Wrecker, but Spider-Woman could not. Clemson already had another assignment for her and she knew she would not see her daughter again if she didn't get on with the next assignment, or if she was killed by the Wrecker. 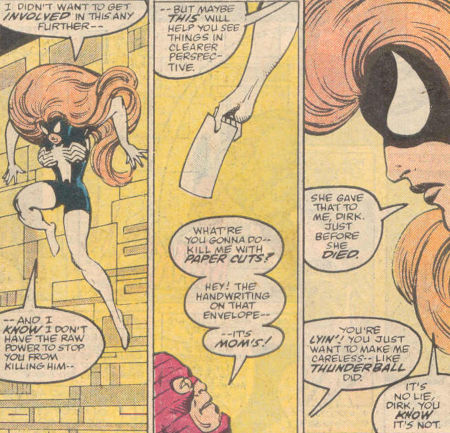 Spider-Man, who seemed to be on the verge of being overpowered. After intervening, Spider-Woman handed the letter to the Wrecker, who quickly read it and stormed away. Once again, Spider-Man found himself in Spider-Woman’s debt. The next morning, Spider-Woman had returned to Washington DC and received another stern warning from Clemson. Although justifiably angry at having been disobeyed, Clemson secretly enjoying putting Spider-Woman under stress, knowing that soon enough his true employers would destroy her. [Peter Parker the Spectacular Spider-Man (1st series) #125-126]

[A mini-series starring Spider-Woman was solicited at the end of this story which was supposed to explore Clemson's vendetta against Julia. However, this miniseries never followed and it would be four years (in real time) before Spider-Woman would next appear]

Julia spent the next several months under the thumb of Clemson and was still, to the world-at-large, known as a fugitive. After Larry, who had gained custody of Rachel due to Julia's frequent absences, moved to Newport Beach, California Julia was able to convince Val to let her move west, so that she could be near daughter. One night, she was at the marina when she noticed the arrival of some criminals called the Pacific Overlords. Easily overpowered by the group, Spider-Woman sought out the only other heroes she knew in the Palos Verdes area, the Avengers West Coast. Initially, she was mistaken for an intruder but Iron Man vouched for her from their previous encounters and the Avengers agreed to assist. A curious energy source near the marina area drew the Avengers to a hidden lab, run by the villainous scientist known as Dr. Demonicus. When the team split up to pursue different leads, Spider-Woman remained at the Avengers West Compound with Hawkeye and did her best to evade as many questions as she could when Hawkeye tried to get to know her.

When the two discovered another clue as to Dr. Demonicus' whereabouts, they departed immediately via Quinjet to Honolulu, where they foiled a terrorist attack by the brainwashed Sunfire and Japanese goddess Pele. Although the adventure did not help them in their search for Dr. Demonicus, it did earn Spider-Woman a very welcome compliment by veteran hero and Avenger Hawkeye on her fighting abilities. [Avengers West Coast #70-71]

Returning to the Compound, Spider-Woman finally confided in Hawkeye, explaining that she had to get to Newport Beach to see her daughter and explained how she had recently lost custody. Hawkeye understood and was offering to loan Spider-Woman one of the teams' cars when they 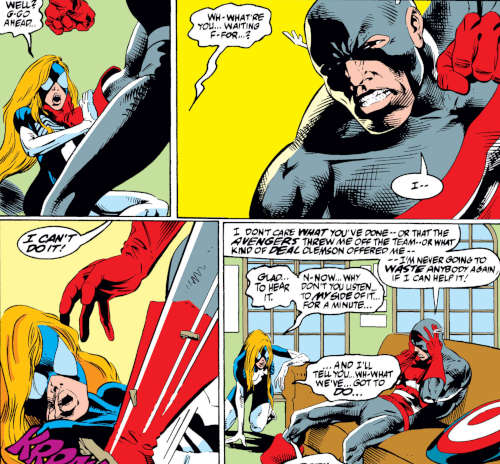 were attacked by USAgent, who until recently had been a member of the Avengers West Coast himself. Following her lack of reply to him, Spider-Woman’s handler, Mike Clemson, had hired him to “retire” her. Fortunately for Spider-Woman, however, although he was at one of his lowest points, the USAgent remained honorable and could not bring himself to kill her. [Avengers West Coast #72]

Joining forces, the three heroes tracked the rest of the Avengers to an island off the coast of Hawaii, a new landmass raised by Dr. Demonicus to become a new island nation with him as its leader. Spider-Woman and her two new allies quickly freed the captive Avengers West, who joined the battle against Demonicus’ Pacific Overlords. Demonicus was on the verge of defeat when they received word that the United Nations, to whom the Avengers currently answered, had recognized the new island nation of “Demonica” with Dr. Demonicus as its leader. No longer having jurisdiction, the Avengers departed via their Quinjet. On the back to their compound, the Avengers offered Spider-Woman full membership, which she accepted. [Avengers West Coast #74]

On a weekend in which she had visitation rights with Rachel, Julia decided to give her daughter a special treat. Knowing that she was fond of super heroes, Julia took Rachel to the Avengers Compound and told her that she would leave her with the Avengers, who would take her to an amusement park. Julia then left and returned as Spider-Woman, explaining to Rachel that she had been asked by her mother to look after her for the day. The team was also joined by the vacationing Fantastic Four, who had with them the young Franklin Richards, who was close in age to Rachel. Unfortunately the day at the park was derailed as the whole group was pulled into the ongoing conflict between the extra-dimensional forces of Thundra and Arkon. Ultimately, a truce (romantic in nature) ended the war between the two forces, allowing the heroes to return to Earth. Once back, Spider-Woman removed her mask in front of Rachel, intent on finally telling her the whole truth. To her surprise, Rachel replied her that she knew Spider-Woman was her mother as soon as she appeared to her earlier in the day, but didn't want to spoil her secret. Her daughter’s acceptance and love made Spider-Woman decide that telling her daughter was the right decision. [Avengers West Coast #75] 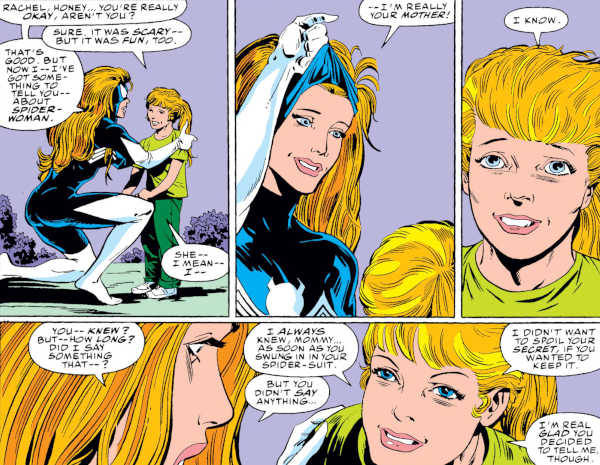 Spider-Woman’s personal problems took an unexpected turn when she found herself the object of interest by two of her teammates. When the Avengers West became involved in the mystery of the unexplained disappearance of a movie star, Spider-Woman volunteered to investigate, only to be joined by Hawkeye and the USAgent, both of whom had developed an attraction to her. During their investigation, the three were captured by the mysterious team of criminals called the Night Shift, who quickly attempted to sacrifice the three heroes to summon the demonic entity called Satannish. Fortunately, the three were rescued by the rest of the Avengers West, who had discovered their hideout by following their own leads.

Although the Avengers ultimately prevailed, tensions between Spider-Woman’s two teammates were clear, though not to Spider-Woman herself. While she remained oblivious, the attraction Hawkeye had for her was quickly noticed by the archer’s wife Mockingbird, with whom he had recently separated. It wasn’t until her other teammates Iron Man and Living Lightning pointed it out that Spider-Woman realized it as well. Unfortunately, Spider-Woman’s other personal life was suffering too. Soon thereafter, she received a hostile phone call from her ex-husband, who was

angry with her for not picking up their daughter as promised. The rebuke caused her to question what was really her primary identity: Spider-Woman or Julia Carpenter? [Avengers West Coast #77-79]

When the Earth found itself in between an intergalactic conflict between the Kree and Shi’ar Empires, the Avengers East and West decided to split into three groups, two of which would travel to the home worlds of the two empires. Spider-Woman was part of the Earth-based squad of Avengers, left behind to act as a rear guard. Julia seemed to have been relieved at being left behind and the scope of the crisis caused her mind to be preoccupied by her daughter and her safety. Once again, she questioned her choice of being a hero above being a mother. Fortunately, the Avengers squads succeeded in their missions and the conflict came to a conclusion without further threat to the Earth. [Operation: Galactic Storm crossover, Avengers West Coast #82]