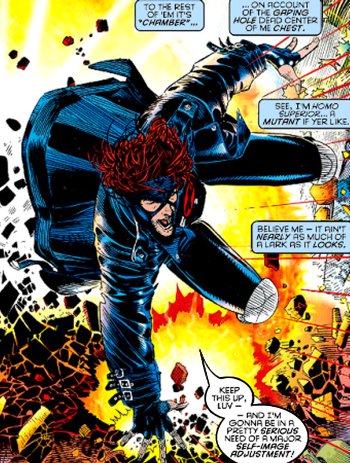 Chamber's power manifestation was much kinder to him in the Age of Apocalypse, blowing a hole in just his chest and leaving his face alone. Jono was living as a prisoner of the Horseman named Mikhail Rasputin until he was rescued by Mikhail's brother, the X-Man Colossus, and his team of young recruits. As Chamber, Jono joined Generation Next in preparing themselves for one day joining the active X-Men and fighting alongside Magneto himself. In his time with the training squad, Chamber distinguished himself as a leader among his peers, and developed a strong flirtation with his teammate Husk. When the traveler Bishop alerted Magneto to the changes in their reality, Magnus sent Colossus' students to infiltrate the Portland Core and rescue Illyana Rasputin, a potential mutant teleporter and time-traveler. Jono and the others made their way inside, but ran into serious opposition when the Core's foreman, the Sugarman, confronted them directly. In the end, Colossus chose to abandon Chamber and the rest of his charges to their fates while he escaped with his sister. Jono almost certainly died in the melee that followed.
------------------------------------------------------------ 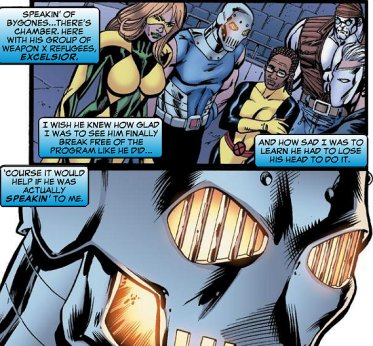 The influence of the Weapon X program played a much larger role in Jono's life in the alternate future called Days of Future Now. Chamber was completely brainwashed by Weapon X's twisted director, Malcolm Colcord to the point where he no longer remembered his past. Colcord used him as an assassin and it was Chamber who killed John Sublime in this reality. He was confronted by Wolverine who tried to jar his memory but failed. At one point, Chamber's internal energies went wild and destroyed not just his face but his entire head. His hatred of Wolverine suggests that it may have occurred during a battle with him. After this, Jono had to wear a containment helmet. He continued as the thrall of Weapon X and was responsible for various atrocities and murders, including the assassination of Nick Fury. Jono eventually broke free of Weapon X's control and helped form a team called Excelsior comprised of others who were victimized by Colcord's Weapon X program. He later joined a new team of X-Men under Magneto's leadership and assisted in efforts to reshape their world in the wake of most of Earth's heroes.