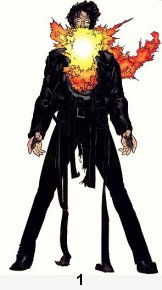 1) While Chamber did have a standard, red Generation X uniform, he almost always eschewed it in favor of his everyday clothes, which consisted of black leather pants, a jacket or coat and a black shirt, while he used scarves or ribbons to cover up the gaping energy-oozing hole in his chest and where the lower half of his chin used to be. [Generation X #1]

-) He eventually adopted a look that compromised between both, which was basically a black version of the team uniform with an X-belt and usually his leatherjacket. [Generation X #43]

2) When new human students enrolled at the school, the team got new uniforms with masks to protect their identities. This time, Jono participated in the team look. Those uniforms resembled the original X-Men uniforms, replacing black with red. Jono, of course, kept his leather jacket and didn’t really need a mask, as he had to cover the lower half of his face anyway. [Generation X #51]

3) After the death of one of their own, the team rededicated itself to their mission and the team got new individual uniforms more resembling streetwear and reflecting their personal tastes. Jono’s consisted of ordinary gray pants, a black shirt with a red X-logo, an oversized black leather-coat and a kind of buttoned leather turtleneck to hide the lower half of his face. [Generation X #64]

4) A short time later, the team members again received new uniforms, this time consisting of a sort of smart material that helped regulate body temperature and offered passive resistance to impact and the various elements. The overall color scheme was a reddish brown and yellow. Jono’s uniform basically consisted again of gray pants, a reddish brown sweater with a neon-yellow X-symbol, over a skintight sweater of a darker material and his buttoned turtleneck. [Generation X #71] 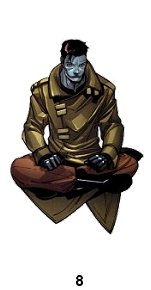 5) By the time Chamber fully returned to active duty, the X-Men no longer wore bright costumes, but were using some black leather ensembles that weren’t too different from Jono’s original outfit. The X-Men had a vast supply of different shirts, coats and jackets from which to pick and Chamber either wore a long coat or a leather jacket over his otherwise all black outfit. [Uncanny X-Men (1st series) #399]

6) While working for Weapon X, Chamber's face had been restored, and his power was channeled through a glowing mechanical power cell built into his chest. His costume was a gray-blue bodysuit covering him from the neck down, with a short collar around his throat. Portions of the body suit had been cut out revealing skintight metallic armor underneath - on his shoulders, his kneecaps, his outer calves, and the two portions on the side of his chest underneath his arms. He also wore a multiple pouched belt and a two-ringed circular emblem on his chest over the power cell. [Weapon X (2nd series) #17]

-) Reborn at the hands of Clan Akkaba, for a time Chamber resembled a younger version of Apocalypse. He had glowing red eyes, ashen gray skin, and En Sabah Nur's trademark blue lining around his lips. The brand of Clan Akkaba took up the major portion of his chest, a blood red symbol resembling a hieroglyph of an eye surrounding by series of curved triangles, arranged to suggest an oval pattern. [New Excalibur #9]

7) As Decibel, Jono wore a very chunky costume that consisted of a white scarf that covered the lower part of his face and matching white, fingerless gloves. He also wore a navy vest, a large belt with utility pouches and a crimson tartan loincloth hanging from the belt. He also wore a pleated, black leather skirt over black pants and large brown boots. [New Warriors (4th series) #3]

8) Jono’s chunky look didn’t last long, however, as he soon started wearing a long trench coat, in green and brown variations. The coat was usually worn buttoned up, with several large clips down the right side of his body. The coat had a large collar, which he would sometimes wear up, covering his lower face. Underneath the coat, Jono wore variations of regular civilian clothing, with large black boots. [New Warriors (4th series) #9]

-) At the Jean Grey School for Higher Learning, Chamber mainly wears civilian clothing, with turtlenecks, high collars or scarves to cover the bottom part of his face.