Cloak and Dagger soon had another encounter with Spider-Man. The remnants of the mob behind Simon Marshall had resurfaced, eager to recreate his success with synthetic drugs and create their own controllable superhumans like Cloak and Dagger -- junkie enforcers bound to the mob's drug supply. Looking for new test subjects, a pack of chicken-hawks ran across the New Mutants on an outing in Times Square, and figured existing superhumans would be perfect for the experiments. Sunspot and Wolfsbane were captured, leaving Cannonball and Danielle Moonstar to seek out Spider-Man, Cloak and Dagger for help.

The heroes arrived too late to prevent the new doctor from injecting Sunspot and Wolfsbane with a modified re-engineering of Marshall's drug cocktail. The two New Mutants began experiencing an uncontrollable boost in their abilities, driving them to the brink of madness. Cloak and Dagger

each found they had a rehabilitating effect on the mutant children. Dagger was bitten by Wolfsbane, but her living light cleansed the drug from Rahne's system. Cloak's darkness was able to drain off the new darkness embodied in Sunspot's altered form. Cloak and Dagger then began to experience uncontrollably augmented powers as well but, as ever, their symbiotic link allowed them to stabilize each other. The vigilantes fed light and darkness into each others' system until they burnt out the effects of the new drugs. In the aftermath, Spider-Man and the New Mutants first suggested that Cloak and Dagger might have been latent mutants whose powers were triggered by Simon Marshall's drug, and offered them training and companionship at Xavier's School. Although both were sorely tempted, Tyrone and Tandy chose to remain apart from others at the time. [Marvel Team-Up Annual #6]

Dagger's health was compromised again when Kingpin and his enforcer, the Answer, resurrected Silvermane. The unique circumstances of his death meant that Silvermane's lifeforce was not destroyed, merely displaced, allowing the Kingpin's scientists to reanimate him as a cybernetic engine of destruction. An unanticipated side effect of his return was a deeper connection to 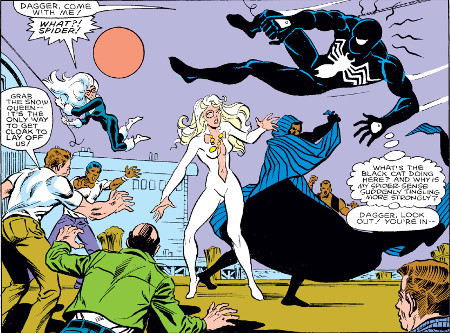 Dagger. Normally, Dagger's light-knives exchanged her life energy with her victim's, shocking them with her ultra-pure "light" while her system harmlessly assimilated and dispersed their impure light. Because Silvermane's life was being artificially preserved, however, his "light" did NOT disperse within Dagger and remained uniquely cohesive in her system. This created a weakening tug in her soul as the pilfered light attempted to return to Silvermane, while also acting like a beacon drawing the zombie-like cyborg to her.

Kingpin sought to take advantage of the situation by leaking word of a drug deal to draw out Cloak and Dagger as prey for Silvermane. Spider-Man, Black Cat, the Rose and his men all appeared as well for various reasons, leading to a major free-for-all. The scrum only broke when Answer realized Dagger's healing powers could be the key to saving Kingpin's comatose wife, and procured her for his boss. Cloak tried to teleport after the flying enforcer, but Silvermane leapt into his cape as he disappeared. Silvermane still instinctively sought Dagger's light (mingled with his own) and forcibly removed some of it from inside Cloak, left over from Dagger's last feeding of her partner. The shock forced Cloak out of the Dark Dimension to dispel Silvermane before he caused any further harm.

At the Kingpin's laboratory, he and the Answer intended to force Dagger into curing Vanessa Fisk, but Dagger was too depleted from Silvermane's drain on her light to awaken. Cloak arrived, but he 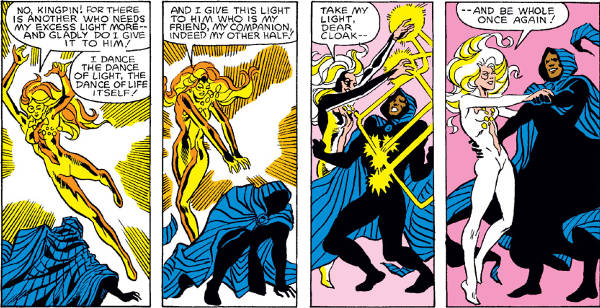 too was so weak from the drain that Kingpin easily overpowered him. Spider-Man, Black Cat and Silvermane broke into the laboratory, sending it into chaos until the Answer gave up his own light to revive Dagger. Now fully aware of the nature of her link to Silvermane, Tandy expelled the foreign light from her system, severing the link between them and fully restoring Silvermane to life. Still bursting with excess light, Dagger ignored Kingpin's pleas to save his wife and turned her power on Cloak, revitalizing him instead. At Cloak's urging, she then refused to even try to aid Vanessa Fisk, and the two of them teleported away as Kingpin screamed after them. [Peter Parker, the Spectacular Spider-Man #94-96]

Unlike Cloak, Dagger often wavered in her dedication to their mission. Although she was devoted to Tyrone, Tandy knew she could technically live a normal life if she ever chose to leave him 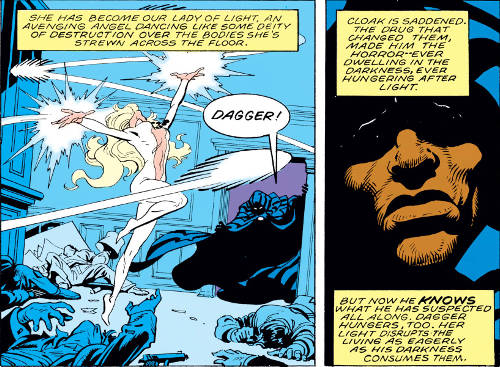 behind. Seeking time by herself, Dagger left Cloak for a time and wound up in a dance club. This distance between them revealed a heretofore unknown aspect of their bond. While Cloak's dependence on Dagger for her light was obvious, it became clear that Dagger also relied on expelling her purified light on a regular basis. Allowing her light to build up too much distanced Tandy from her humanity, a state resembling intoxication and leaving her oblivious to her surroundings or the actions of others. This extreme behavior could shift her personality from naive and spacey to a haughty goddess, separate from the cares of "mortals." Caught up in a struggle with drug dealers, Dagger reunited with Cloak and purged her excess light into him, but was crestfallen to learn she couldn't leave him for long, even if she wanted. [Marvel Fanfare (1st series) #19]

Months earlier, Cloak and Dagger believed they had cleansed Marshall's drug from the bodies of the New Mutants, Sunspot and Wolfsbane. In fact, the drug's effects had grown over time, 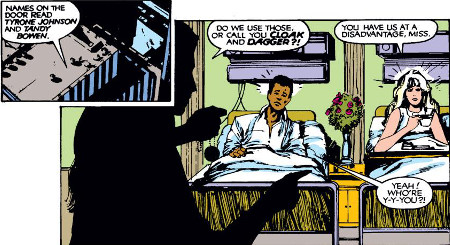 destabilizing the pair of young mutants. Subconsciously sensing a connection, the mutants sought out Cloak and Dagger for aid. Inexplicably, the attack of the crazed mutants caused them to absorb the powers of the Darklight Vigilantes, turning Cloak and Dagger back into Tyrone Johnson and Tandy Bowen. The duo were transported to the hospital to recover from their injuries, reported as a "werewolf attack" after passers-by saw Wolfsbane. Cannonball and Moonstar learned of the situation and eventually tracked Tyrone and Tandy down to seek their aid in restoring Sunspot and Wolfsbane to normal. Tyrone refused for the both of them, however -- the powers of Cloak and Dagger were a curse they were now glad to be rid of. [New Mutants (1st series) #23]

Moving on wasn't so easy, though. Tyrone chaffed at the fact that he was powerless to stop a passing chicken-hawk for propositioning kids at Port Authority. However, as Tyrone and Tandy began to plan their future, he realized just how little they had in common (or holding them to one another) without their shared powers and plight. Tyrone's feelings for Tandy had grown beyond mere friendship some time ago, and regaining his humanity made them all the more apparent. Despite the troubles of banal everyday life, Tyrone still dreaded the idea of retaking his mantle as Cloak and the hunger that came with it. Tandy guilted him into changing his mind, though, as he realized refusing the help the New Mutants would cost him Tandy just as much as becoming the demon of darkness again would. [New Mutants (1st series) #24]

Tandy was blessed by their decision to meet the New Mutants at Saint Anne's Church, for it reunited her with her uncle, Father Mike Bowen of the parish who was acquainted with the New Mutants. Unfortunately, her joy only drove Ty deeper into his own sullen depression. He feared regaining his powers and losing his connection with Tandy equally, putting great stress on his heart. Charles Xavier reached out to Tyrone privately and counseled him about the inner strength he must have had to deny the darkness within for so long. Xavier's assurances and a reunion with Tandy eased Ty's troubles, and even cured him of his stutter, at least temporarily. 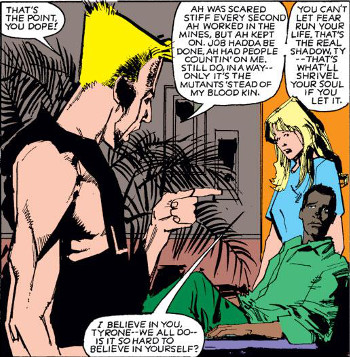 the powers of Cloak and Dagger were uniquely like magic and yet not magic in the way they presented. Illyana Rasputin's attempt had bonded her to the powers of light and darkness simultaneously, and the conflicting waves nearly destroyed her. This time, Professor Xavier and Rogue entered the equation, regulating the process as the power was pulled out of the young mutants, channeled through Rogue's absorption abilities, and then finally returned to Tyrone and Tandy. Cloak and Dagger rededicated themselves to their life's mission in the aftermath, with a new sense of hope as well as friends and family to rely upon should they falter. [New Mutants (1st series) #25]

The mob who inadvertently created Cloak and Dagger returned again, this time under the direct supervision of their capo, DiAngelo. Seeking an edge against their creations, they kidnapped Professor Gregson Gilbert and forced him to create a control module for his alchemical robot, Dragon Man, as well as four new robot powerhouses. Because Cloak and Dagger's powers principally affected life energy, lifeless robot enforcers would be highly resistant to them. Spider-Man and Power Pack also got involved in the situation, leading to several confrontations with DiAngelo and his robots. When the seven year old Mass Master struck DiAngelo to steal the control module, he accidentally knocked the mobster off a building and fatally injured him. The little Energizer and Power Pack begged Dagger to save him with her light. Tandy was ready to leave DiAngelo to his death, and likely would have killed him herself under other circumstances. However, she realized how the innocent Power Pack kids looked up to her and Cloak, and saw how causing a man's death would corrupt their innocence as much as DiAngelo's mob took away hers in their experiment. Dagger used her light to revive DiAngelo against her better judgment to preserve Energizer and Power Pack's faith in her. [Power Pack (1st series) #6-8]

Cloak and Dagger's pursuit of those who would prey on runaways expanded beyond the drug trade as they attacked flesh-peddlers using young girls for peep shows and prostitution rings. The 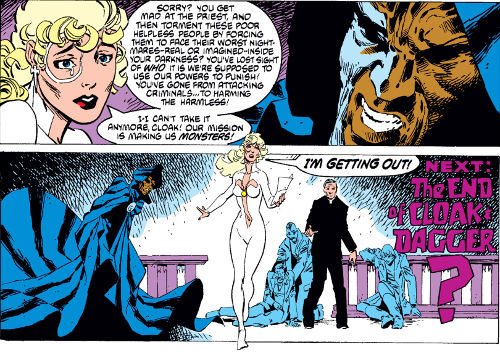 depth of human depravity began to weigh on Dagger again, however, as she realized that the customers were just as bad as the merchants. When they returned to the Holy Ghost Church, Father Delgado made another attempt to "save" Dagger from the "demon" Cloak. He had anonymously contacted Dagger's stepfather, and the two of them arranged a reconciliation with Dagger's mother. Tandy was initially tepid at the idea of returning home to her mother, but Cloak was furious at Delgado for trying to take her away from him. In his anger, he fed on the Holy Ghost's congregation and pulled the priest himself into darkness, pushing him to the brink of madness. Dagger was forced to enter his cloak and protect the priest and other parishioners from the hungry darkness that Cloak embodied. Cloak's outburst cemented Dagger's decision. She wanted one last chance to return to a normal teenaged life before losing herself to the darkness forever. [Cloak and Dagger (2nd series) #1]

Cloak begrudgingly accompanied Dagger and Father Delgado to the party on Long Island where Tandy was to meet her mother. Desperate for any delay, Cloak called her attention to a fire in the 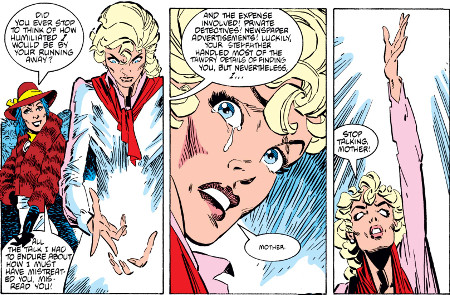 marina as they neared their destination. Looking for criminals to punish, Cloak attacked a band of teenagers who set fire to their daddy's yacht out of spite. Dagger scolded Cloak for feeding off of the very teenagers they usually tried to save, and saw a lot of her past life in these kids. She decided to march right into the party being held by the kids' parents and lecture them on neglecting their children. Cloak did nothing to stop her, for he realized this was the same party they had been driving to earlier. Sure enough, Tandy crossed paths with her own mother, Melissa Bowen, who was just as drunk and high as the rest of the adults in the mansion. The self-absorbed Melissa tore into Tandy about the hassle and embarrassment of having a runaway daughter, driving Tandy back into Cloak's arms forevermore. [Cloak and Dagger (2nd series) #2]