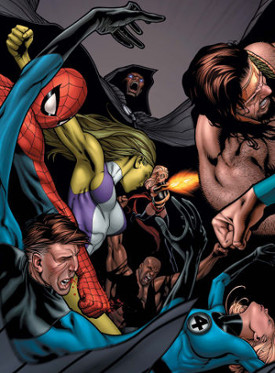 As the quintessential lawless and urban vigilantes, Cloak and Dagger naturally wound up on the side opposing the Superhuman Registration Act. Working for Captain America and his team of "Secret Avengers," Tyrone in particular was relied upon heavily to use his cloak for transporting the unregistered heroes into and out of danger. Cloak and Dagger were involved in the siege of the Negative Zone prison '42'. It was Cloak who brought the conflict to New York City by swallowing all the dozens of combatants up into his cape and transporting them via the Negative Zone portal back to Earth. [Civil War (1st series) #2-7]

Cloak and Dagger remained loners for the most part after the Superhuman Civil War ended, although they kept in contact with Luke Cage and his still-unregistered team of Avengers. Cloak provided a quick teleport for the team to steal Iron Man's Quinjet and beat his Avengers Initiative unit to the Savage Land. [Secret Invasion #1] Perhaps seeking to avoid complications with the Registration Act, however, Cloak and Dagger once again decided to take their war against the drug trade international. Traveling to Colombia, the duo began active raids on drug farms to burn and destroy 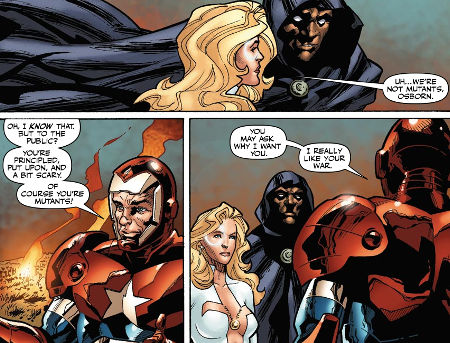 the crops being harvested for opium and other drugs harming America. It was there that they were located by Norman Osborn, the Iron Patriot and newly appointed commander of the 50-States Initiative. Osborn enjoyed the vigilantes' dedication to the "War on Drugs" and thought their crusade would make excellent political capital for his Initiative. He wanted to recruit Cloak and Dagger to serve on his officially-sponsored team of X-Men. In exchange for public support and photo ops as well as occasionally beating up anti-mutant villains, they would be provided with government support for their campaign on the drug trade in Asia and Central America. Valuing their mission over their own personal distaste for Osborn, Cloak and Dagger didn't see any choice but to agree. [Dark X-Men: The Beginning #2]

[Note: Contrary to previous assumptions and revelations, Dagger openly stated she and Cloak were not mutants in this issue.]

Cloak and Dagger were among several operatives Norman Osborn chose for his new X-Men, including Mimic, Weapon Omega, Namor, Osborn's existing Wolverine, and the assistance of Mystique and the Dark Beast. When anti-mutant rioting reached the streets of San Francisco, Osborn seized the opportunity to point the blame at Cyclops and the local contingent of X-Men for failing to keep the peace, bringing in his Avengers and HAMMER to institute martial law. Through his Cabal, Osborn had a secret alliance with Emma Frost of the X-Men, who became the public figure and leader of Osborn's officially-sponsored X-Men. With the city under curfew, the team of X-Men Cloak and Dagger joined had free rein to bring in mutant and anti-mutant dissidents alike. They enjoyed a week of successes and popular support around the Bay area, both due to their own talents and Osborn's PR maneuverings in favor of his team. 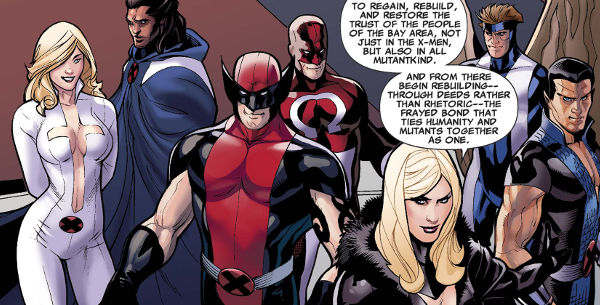 Still, Tandy and Tyrone found their allies to be a repulsive lot. A collection of "reformed" villains, murderers and the mentally unstable, the agents of HAMMER were also torturing mutants they captured in the Omega Machine to feed Weapon Omega's powers. The duo quickly recognized they had chosen the wrong side, but they saw little opportunity to escape their commitment, as Osborn's forces seemed to gain increasing control over the city at the expense of Cyclops and his X-Men. The moment came when Emma Frost and Namor revealed they had been undercover for Cyclops the whole time. They helped X-Force free the prisoners and offered Cloak and Dagger a spot on the true X-Men. Tandy and Tyrone jumped at the chance, abandoning Norman Osborn in a heartbeat. [Utopia crossover]

With the prevalence of Osborn and HAMMER in the continental United States, the X-Men and the mutant faction moved off shore to the artificial island of Utopia. Cloak and Dagger spent a few weeks associating with the X-Men as they tried to adapt to the community. Dagger consulted on Deadpool's attempt to gain membership in the X-Men, Cloak assisted Wolverine in his mission against the shadow lord Romulus, and both were present during a conflict with the Atlas Foundation. [Wolverine Origins #42-45,47-48, X-Men vs. Agents of Atlas #1-2, Deadpool (3rd series) #16]

In the long run, however, the duo just weren't a good fit for the X-Men. Cloak had little interest in socializing with anyone other than Dagger, and started teleporting away daily to visit his old neighborhood in South Boston. Dagger tried to fit in as best she could and made many fast friends among the X-Men, but Doctor Nemesis's test results were conclusive: Tandy and Tyrone weren't 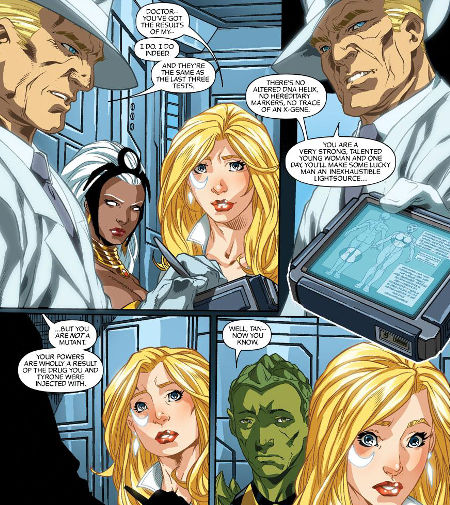 mutants. They had no X-genes, and no hereditary markers indicating benevolent mutation. As far as the testing could show, their abilities were entirely derived from Simon Marshall's drugs.

Dagger tried to turn to Cloak for support now that she felt like an outsider on Utopia, but Tyrone was busy at home. He had reassumed his human form and connected with Tia, a girl he knew from high school, and was spending more and more time with her and away from Tandy. Unfortunately, Tia soon revealed she was part of a quasi-religious order that believed in rejecting superhuman powers and living a life free from those sinful and corrupting abilities. Tyrone was captured by the organization and forced into their brainwashing program.

Tandy was frantic when Tyrone went missing for three days, but Cyclops dismissed her concerns as nothing more than a lovers' quarrel. Dagger felt she was no longer being taking seriously since 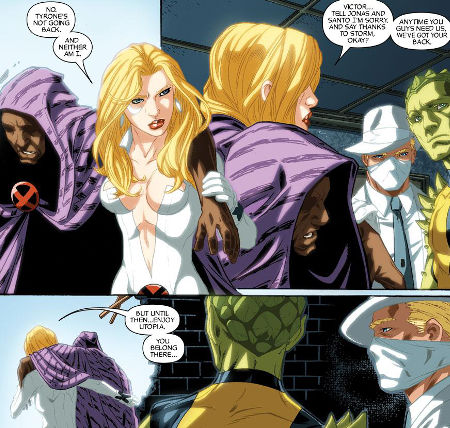 her problems weren't "mutant problems" anymore, so she went looking for Cloak herself. Their connection led her to South Boston and she freed him from the conditioning before Tia's group succeeded in altering his mind. Some of Dagger's friends from the X-Men showed up to support her in the end, but Tandy and Ty firmly decided Utopia just wasn't their home anymore. Dagger departed the X-Men on friendly terms and she and Cloak moved back into the deserted Holy Ghost Church, returning to their roots in New York City. [Cloak and Dagger One-shot]

[Note: Doctor Nemesis's tests discount previous statements that Cloak and Dagger were mutants, as well as calling into question D'Spayre's version of their origin at its core. Years later, the introduction page for Cloak and Dagger (4th series) #1 would again refer to them having "latent mutant genes", swinging the pendulum again on the source of Tyrone and Tandy's powers.]

While the duo seemed to be swinging towards "Will they" in their constant "will they/won't they?" dynamic after returning to New York, in the months that followed they swung back towards awkwardly platonic life partners. Tandy and Tyrone seemed to acquire the legal deed to the Holy Ghost Church, but soon the city of New York declared it condemned and planned to knock down the church for commercial purposes. Cloak and Dagger found themselves adrift while trying to stop the demolition, and failed to communicate their feelings to each other. Tandy wanted a more normal life and began taking philosophy classes at Empire State University without telling Tyrone. Meanwhile, Cloak audited courses at the learning annex to set up "Cloak & Dagger" as a non-profit version of Heroes for Hire, helping runaways and providing security on a donation basis for clients. He got a start-up grant from the Future Foundation and even hired billboard advertisements as a surprise for Dagger. Clearly, the partners were going in different directions.

Their future was changed by the intervention of the Chinatown crime lord called Mr. Negative. A previously unknown third survivor of Simon Marshall's original drug trials, Negative had both powers of light and darkness held in balance. He learned from a seer that Dagger was destined to 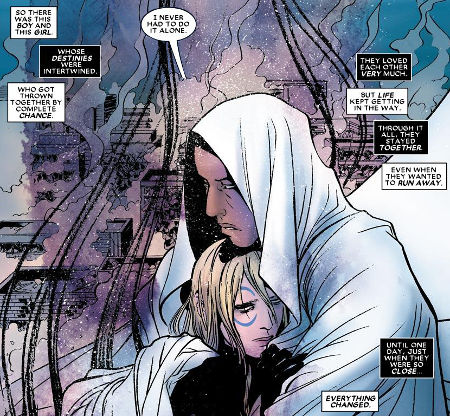 end his life, and so he made a thus-far unspecified deal with D'Spayre to intervene against the vigilantes. After making preparations, Mr. Negative kidnapped Tandy and Tyrone. He subjected Dagger to his corrupting touch, which had the side effect of inverting her powers, giving her the same uncontrollable darkness Cloak had struggled with for years. In order to save Tandy, Cloak allowed Negative to invert him as well, gaining the light powers necessary to purge Dagger's new darkness. Tyrone reached out to Tandy and pulled her into a passionate kiss and embrace, stabilizing both their powers in a massive release of energy. Ty and Tandy awkwardly walked back the kiss afterwards, with Tyrone claiming it was the most expedient way to deliver the "Lightforce" to her, and Tandy claiming she believed that. [Spider-Island: Cloak and Dagger #1-3]

The duo continued as drug-busting vigilantes for a time after that, with Dagger now being driven by the hunger for lifeforce, and Cloak containing her as best he could. [Superior Spider-Man Team-Up #1] However, under unrevealed circumstances, they fell under the sway of Mr. Negative's Inner Demons while he was incarcerated. A drug known as Shade chemically recreated Mr. Negative's corrupting touch without his direct involvement. As a result, Cloak and Dagger remotely fell under his sway as they were compelled to repeatedly use Shade in order to remain under his control.

Cloak and Dagger freed Mr. Negative from custody, and they all returned to Shanghai, where Negative sought revenge on one of his old associates, Shen Quinghao, who had gone legit and turned humanitarian, now working with Parker Industries. The Inner Demons had been distributing Shade on the streets of China, and Mr. Negative hoped to use Shade on Quinghao on live television, forcing the former snakehead to confess his crimes to the world and ruin his philanthropist image. Fortunately, the plan relied upon Cloak and Dagger kidnapping CEO Peter Parker so Negative could expose him to his corrupting touch. Negative's touch normally only worked once on a victim and, unbeknownst to all, Negative had previously corrupted Parker's alter ego Spider-Man in one of their encounters.

Posing as Negative's slave, Parker was able to plant a tracker on Cloak and use the high-potency sample of Shade that Negative gave him to synthesize an antidote. When Negative, Cloak and 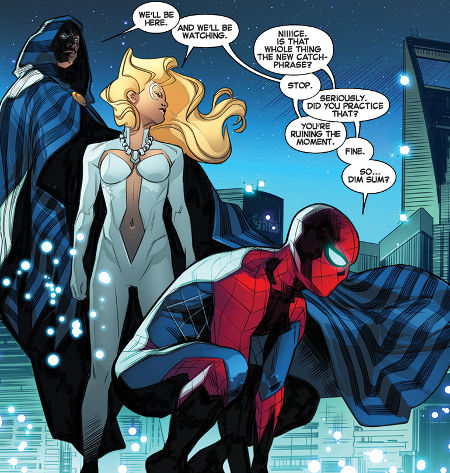 Dagger attacked Quinghao's ceremony, Spider-Man used the antidote to restore Tandy and Tyrone to normal, changing them back to their original powers in the process. Cloak and Dagger helped defeat Mr. Negative's scheme and dedicated themselves to cleaning up the drug trade in Shanghai. [Amazing Spider-Man (4th series) #6-8] While recovering from the influence of Shade, they worked in concert with Parker Industries and the police. Cloak and Dagger defended the antidote and its inventor Doctor Wu from Neon Dragon and the Inner Demons when they attacked Parker Industries. [Amazing Spider-Man (4th series) Annual #1]

Cloak and Dagger always find themselves returning home, however, and eventually made their way back to New York City. They were present in Manhattan when Hydra's Army of Evil descended on the city, and joined the Defenders and other heroes in residence fighting against the horde of super-villains. Hydra did not want New York conquered, though... only contained. Blackout unleashed his power from the harbor to contain all of New York in the Darkforce Dimension, cast behind an impenetrable barrier of perpetual darkness, hounded by the demons native to the realm. Dagger has proven uniquely qualified to assist those trapped in the dome for many months. She taxes her powers to release light throughout the city to fight back the darkness for several hours a day, the only light source the city still has to rely upon. [Secret Empire crossover]