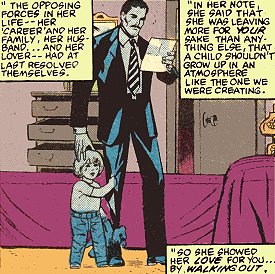 Alison Blaire is the daughter of Carter Blaire and his wife, Katherine. When they were married, Carter was studying to become a lawyer and Katherine helped him with the money she earned as a jazz singer. When their daughter was born, Carter assumed that his wife would stop singing and stay at home, however Katherine had no intention to do so. They often fought about it and, finally, Katherine fled into the arms of another man, not wanting her daughter to grow up in such a strained atmosphere. Carter and his mother, Bella, then raised little Alison, though the subject of her mother was never brought up in all these years. [Dazzler #21]

Like many teenagers, Alison loved music and dreamed about becoming a professional singer. She kept practicing dancing and performing in her room, much to her father’s anger.  He wanted

his daughter to follow into his footsteps and become a lawyer and blamed the loud music for the headaches that Alison was experiencing during puberty. When her high school was holding a talent contest, Carter forbade his daughter to attend, but Alison’s grandmother, Bella, settled things with him and she went to the high school dance. When it was finally her turn and she was handed the microphone, the crowd was not only impressed by her beautiful voice but also by the marvelous light show. All present thought it was part of the equipment. 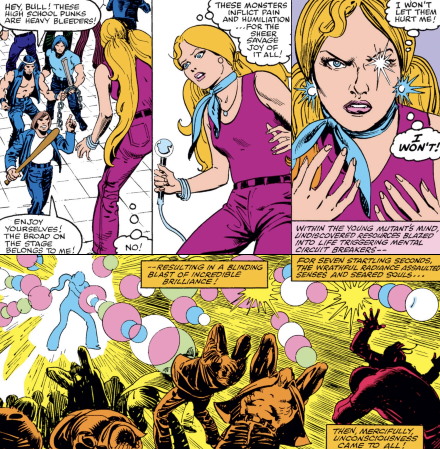 Not before long, Alison’s performance was disturbed as a gang of bikers invaded the party. They caused much destruction and the leader of the gang claimed the “broad on the stage“ for himself. The stress of the situation fully triggered Alison’s mutant power and she unleashed a blast of incredible brilliant light. All were blinded and the police had no problems keeping the crowd under control. The intense light was explained as a power overload, though Alison knew it was she who had caused the blast. She thought herself a freak and never wanted to use these powers again.

In the following years, Alison joined her first bands, but she also completed high school and entered a prestigious pre-law program, following her father’s master plan.  With maturity came

In the succeeding months, Alison developed an act, designed her distinctive facial facade and invested in a pair of custom built magnetic clip-on skates ... thus was Dazzler born. For about two years, she tried her luck in the music business, but without success. She only landed minor gigs in night clubs and used her  mutant power of transforming sound into light to create her own light show to perfectly match the emotions she was singing about. During one of these occasions, 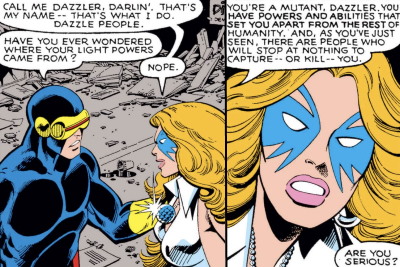 Dazzler was registered by Cerebro at Xavier’s mansion at the same time as another mutant signature (that of Kitty Pryde) was recorded. Unaware that the Hellfire Club had planted a bug at the mansion, the X-Men split up to locate both possible new recruits. The team assigned to Chicago was easily captured by the Club’s White Queen, however the X-Men in New York overcame their attackers because of them being unprepared for Dazzler’s light blasts. The songstress learned that her strange powers were result of her being a mutant and she helped the X-Men to free their captured teammates. When the battle was over, however, she turned down Xavier’s offer to join the team, as she still wanted nothing else than to be a singer. [X-Men (1st series) #129-131]

When the Beast read in the newspaper about the hot club “Numero Uno“ needing a replacement singer, he remembered Dazzler, of whom he had heard of through his former comrades the X-Men.  He contacted Alison about the audition, however the Asgardian Enchantress also took part. 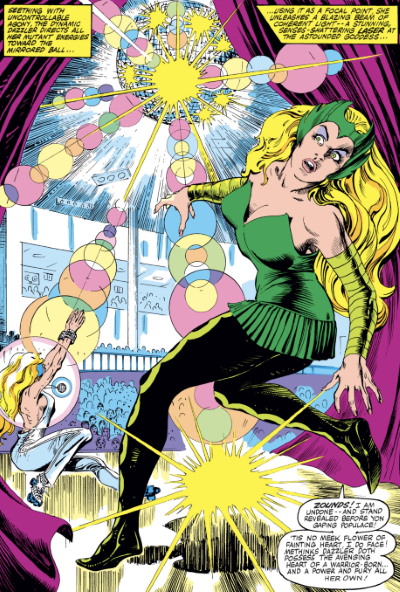 In the end, club owner, Stevie Wildfire, had to choose between her and the Dazzler. Though he thought the Enchantress was the most beautiful female he had ever met and she could have his car, his house and even him, Wildfire knew that Dazzler was the better singer and she got the gig. Many of Ali’s super hero friends came to see her perform, but the event was disturbed by the Enchantress. From behind the stage, she used her magic to cause Alison to grow older by the minute and the crowd watched helplessly as Dazzler withered away. Fortunately though, Alison spotted her opponent before she was too weak to fight back. She directed her light powers at the night club’s giant disco mirror ball underneath the ceiling, using it as a focal point for her energies. A tight laser beam ricocheted off the ball towards the Enchantress, revealing her presence to the gathered superheroes among the crowd. 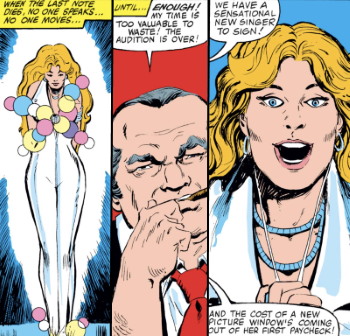 During the resulting battle, the audience fled as the club was destroyed. Alison thought that her career was over before it even began, yet one music publisher had stayed, thinking the battle was a stage act. He got Dazzler an appointment with his friend, Harry Osgood, and, after she sang in his office, he agreed to become her manager. [Dazzler #1-2]