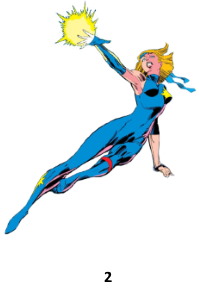 1) Alison knew that, in music business, good looks and show effects are as important as talent and voice. She came up with the name Dazzler and this silvery outfit, magnetic clip-on roller skates and facial make-up similar to the rock group known as KISS. [X-Men (1st series) #130]

2) After Dazzler was publicly outed as a mutant, she no longer received any jobs in the show business. Instead, she became a superhero and designed herself a real costume [Dazzler #38]. She continued to wear that outfit when she later joined the X-Men.

3) During the time the X-Men were living in Australia, Dazzler modified the costume. Although still of the same color, it was now a two-parter, showing a lot of the tan she got from sunbathing in the Outback. Alison first wore this costume during Inferno. [Uncanny X-Men (1st series) #242] 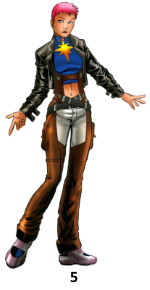 4) Dazzler spent months, if not years, in the Mojoverse with her lover, Longshot. She was wearing something different in the few occasions she was seen during that time, though all these outfits fit a basic theme. Basically, these costumes were full bodysuits in the colors blue and white, a jacket on top and the star emblem somewhere on either the shirt or the jacket. [X-Men (2nd series) #10]

-) Back on Earth, Dazzler returned to singing and was again wearing her stage outfit. However, after having cut her own hair short and dying it pink, she had to wear a blond wig while on stage. [Deadpool (2nd series) #67, New Excalibur #1]

5) Upon joining Excalibur, Dazzler was given a new costume by Sage. The most outstanding features of it were a pair of brown leather chaps that she wore on top of some cream-colored pants and a kidney belt, reflecting Ali’s love for motorbikes. The blue shirt with the star emblem and a bare midriff seemed to be a reminder of her Australian costume. Most of the time, Dazzler wore a black leather jacket on top of it. [New Excalibur #3] Later, Alison has simplified this costume, dropping the belt and replacing the chaps with some basic brown pants instead. [New Excalibur #19]

6) When Dazzler joined the X-Men on Utopia, she adopted a rather different look that consisted of a blue and gold full-body suit. There were silver sections on the chest and legs, as well as a large X logo in the centre of the chest. There were a number of different versions of this costume that had different colour pallets, but the general design stayed the same. [Uncanny X-Men (1st series) #503]

-) When Dazzler first joined up with the X-Treme X-Men, she remained in street clothes consisting of a tank top and jeans, with a jacket and cowboy hat. Depending on what reality she was in, she altered her clothes to suit the environment.

7) Whilst hopping realities, Dazzler met an alternate version of herself who gave up her own life so that Alison could live. As a way to honour the sacrifice, Dazzler chose a uniform that bore a striking resemblance to her deceased counterparts'. Consisting of an black and grey full-body suit, it also had bluw shoulder pads and a partial star on the chest. She accompanied the look with pink glasses and silver knee-high boots. [X-Treme X-Men (2nd series) #9]

8) After joining S.H.I.E.L.D., Dazzler wore a white armoured body-suit with black trimming on the top half. She also wore a belt with numerous pouches, as well as a large gun. [Uncanny X-Men (3rd series) #8]

9) After being imprisoned by Mystique, Dazzler opted for a costume that now fitted her mood. Now consisting of a simple dark blue long-sleeve dress, Alison kept her trademark yellow eight-point star on the chest. The dress itself was worn in numerous places, creating a grungy, bothic look. To complete the look she added gloves, a silver belt and a pair or dark blue boots. [Uncanny X-Men (3rd series) #24]

10) Joining up with Havok's Astonishing X-Men, Dazzler went back to an amalgamation of a few previous costumes. Going back to her all-in-one blue body suit, she added a yellow star in the centre of the chest and a gold belt. On top of it she wore a dark blue jacket. [Astonishing X-Men (4th series) #14]