Domino worked alongside X-Force on several missions, during the Younghunt, and in combat against Nimrod and Feral. Dom gelled easily with the X-Force team, but professional relationships 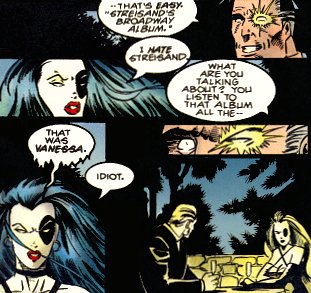 had never been a problem for her in the past. It was her personal relationship with Cable that required some delicate work. While they became close comrades during their days in the Six Pack, Domino had never been more than that in the past. Cable had begun dating Vanessa in her Domino guise, however, leaving him with feelings for the real Domino when she returned. Domino was willing to reciprocate his interest, but struggled with putting their long friendship at risk and the specter of Cable’s recent past with Vanessa. Their first date at Tavern on the Green in Central Park had some twists, but ultimately went well for the two of them. [Cable (1st series) #15] 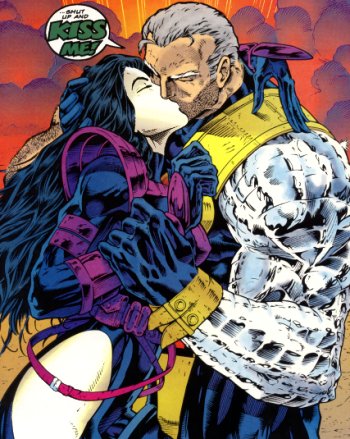 Cable began including Domino in more of his life, including breakfast at the Xavier Mansion with his folks, Cyclops and Phoenix. [Cable (1st series) #17] Domino was still gun-shy about admitting any real feelings on her part, until all of reality was threatened by the instability of the M’Kraan Crystal. Nate tried opening up to her first, admitting openly that he thought of Dom as more than a friend. She initially brushed his confession aside but, as the minutes to doomsday counted down, Domino confronted Cable and told him there was no one she’d rather spend her last few hours with. The two finally kissed and embraced one another, and their relationship moved to the next level. [Cable (1st series) #20]

When X-Force’s base of operations at Camp Verde became unsustainable, Cable sent Domino to scout new possible locations for the team to occupy. They ultimately settled on one of Arcade’s abandoned Murderworld facilities, built underneath New York City. [X-Force (1st series) #39-40] Their new headquarters didn’t last long, however, as Arcade soon noticed their presence and set the facility to explode, leaving them homeless. [X-Men Prime] Professor Xavier invited Domino and X-Force to live at Xavier Institute and work more closely with the X-Men, an offer that Cable and Domino accepted. [X-Force (1st series) #44]

Shortly after moving into the mansion, Domino’s attention was caught by a series of news reports about an alleged mutant serial killer operating in the Rocky Mountains. When reports came in about a paw print discovered in the area too large for man or beast, Dom had the haunting suspicion that her old comrade Grizzly may have been involved. She traveled to the Rockies and located the isolated cabin safe house Grizzly maintained in the area. To her despair, Domino discovered her suspicions were correct – Grizzly had become unstable, murdering at least thirteen people. 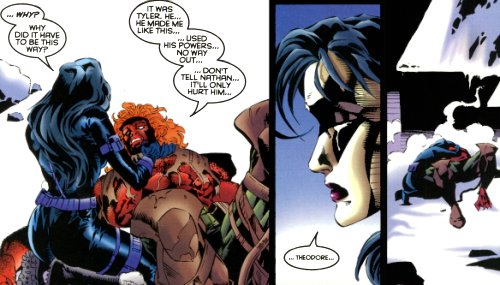 He told her Cable’s son Tyler messed with his mind, making him a killer as revenge against his father. Domino and Grizzly fought until she had him subdued at gunpoint. Grizzly begged Dom to kill him before Tyler’s programming made him kill again. When she wouldn’t pull the trigger, Grizzly made a move, forcing her to shoot in self-defense. As he died in the snow, Grizzly asked Domino not to tell Cable, because hurting him was exactly what Tyler hoped to gain. [Cable (1st series) #22-24] Tyler ended up being killed by Wolverine before Domino could exact revenge or Cable could redeem his son, leaving them both with regrets.

As Cable began focusing on Askani matters and the sudden arrival of Nate Grey, Domino found herself acting more and more as X-Force’s primary field leader instead of Nathan’s second. Indeed, Domino and X-Force found themselves without Cable while facing off against serious threats such as Mister Sinister and Onslaught. When Onslaught split the team into separate astral dreamscapes, Domino’s fierce independence almost kept her from choosing to reunite with the team. Still, in the end she accepted her responsibility and her place as part of the group, instead of remaining alone. [X-Force (1st series) #57-58, X-Man #18]

Shortly after Onslaught, Domino and Cable found themselves reuniting with Kane and Vanessa, who had created a life together in San Francisco. Domino still had strong feelings about the metamorph which she barely kept beneath the surface even before the sub-atomic Psycho Man 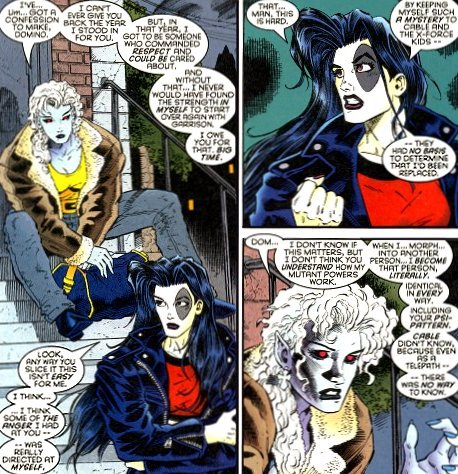 began manipulating their emotions. During the fight that broke out, Vanessa taunted Domino that she was easy to replace because no one knew her well enough to tell the difference. Still, after Psycho Man revealed himself, Vanessa let herself be captured while posing as Kane to protect him from harm. Domino agreed to help Kane rescue Vanessa from the Microverse and they joined forces with the Micronauts. After Vanessa’s rescue, she and Domino made peace. Copycat admitted how good it felt being someone like Domino who commanded respect from other people, and Dom accepted that replacing her was easier for Vanessa because Domino never let people get close enough to really know her and recognize a copy. [Cable (1st series) #37-39]

While taking a vacation from her responsibilities with X-Force, Domino was attacked at Carnivale in Brazil by her old jailer, Pico. This led to her uncovering a planning assassination of her ex, Milo Thurman. Seeking to prevent his death, Domino broke into the NSA holding facility where Milo was housed, only to discover Lady Deathstrike of the Reavers had already extracted him. Domino was kidnapped by the Reavers as well and learned that Donald Pierce intended to turn Milo into a cyborg in order to increase and control his brilliant mind. Domino managed to fight through the Reavers, but she and Thurman were only briefly reunited. Pierce’s cyber-conversion procedure proved too much for Milo to withstand and he passed away just after telling Domino that he still loved her. [Domino (1st series) #1-3]

On her way back to New York, Domino was intercepted at the airport by SHIELD. G.W. Bridge wanted the help of Domino and X-Force in retrieving a field agent in danger. Dani Moonstar, one of Xavier’s former students, had been working with X-Force’s arch-enemies in the Mutant Liberation Front for months. [X-Force (1st series) #66] Domino and X-Force attempted to  extract Moonstar in the middle of a hostage situation orchestrated by the MLF, but it proved to be a trap 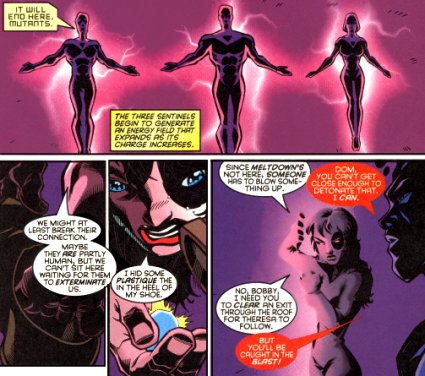 set up by Operation: Zero Tolerance, who lured the MLF to the research facility with a false lead. Attacked by Prime Sentinels, Domino volunteered to stay behind and cover X-Force’s retreat, but was caught in her own plastique explosion. Worse still, the OZT Commander Ekatarina Gryaznova held a personal grudge against Domino from their past. Gryaznova fought Domino years earlier in El Salvador while operating a neuro-cybernetic combat droid called Jericho. When Domino destroyed Jericho, the neuro-feedback left Gryaznova in a coma for nearly a year. Looking for payback, the commander put Domino through invasive surgery, implanting a neuro-inhibitor device at the base of her skull. The device produced constant bio-feedback in electrical impulses to scramble her reaction time and created constant static in her head. [X-Force (1st series) #67-68]

Abandoned on the side of the road after the surgery, Domino barely managed to make her way back to X-Force. With Zero Tolerance out in full force and the X-Mansion compromised, Cable wanted X-Force to go underground and stay out of the open. Domino decided to deal with her new problems on her own, and broke things off with Cable and the team until she could get her head on straight. [X-Force (1st series) #69-70]