Domino tried to return to mercenary work, as she always did when her life was at loose ends. She was a bit reckless, however, and accepted a job from the Assassins Guild without realizing who they were, and then got caught in a death duel between the guild and the Hand. The guild wanted Domino’s luck on their side while they went after a cash score being run by the Hand in Louisiana. 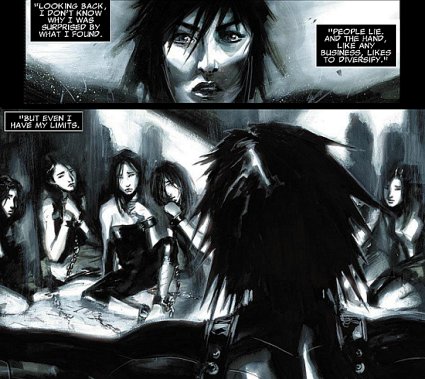 During the firefight, though, Domino discovered the Hand was running a black market slavery ring at the same location, with underage Japanese girls. Domino abandoned the Assassins Guild to get the girls to safety. As “luck” would have it, the truck she used to transport the girls happened to contain the score the guild was looking for: $237 million in cash. Having accidentally painted a target on her back for both the Hand and the Guild, Domino hid the truck in one of her safe houses while she tried to figure out what to do with it. [X-Force: Sex and Violence #1-2]

During a mission gone bad in Turkey, Domino was extracted by G.W. Bridge and SHIELD. In exchange for saving her life, Bridge wanted her assistance hunting down the Punisher. Along with Silver Sable and the Contessa Valentina de Fontaine, Domino became part of Bridge’s Anti-Punisher task force. They went active just as Jigsaw began an operation of his own against Castle, using a doppelganger to frame the Punisher for active terrorist actions against the United States. Of the task force, only Domino recognized the frame job for what it was. They went into the field and stopped Jigsaw’s Punisher and a group of Hand assassins from killing Castle, and finally managed to arrest him on the New York subway system. 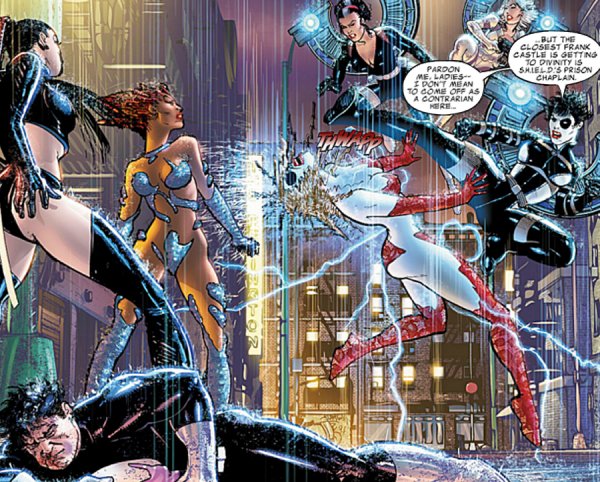 During transport to a SHIELD holding facility, Castle’s convoy was attacked by Jigsaw and the Wrecking Crew. Domino and the others were sidelined by the sheer power of their opponents, but the Punisher used the Wrecker’s own crowbar to beat through the Crew and Jigsaw, and then voluntarily returned himself to SHIELD custody. [Punisher War Journal (2nd series) #13, 19-23]

Several weeks later, Domino was hunting the mutant thief named Vanisher, presumably on behalf of SHIELD. She tracked him to Japan, but accidentally crossed paths with the newly re- 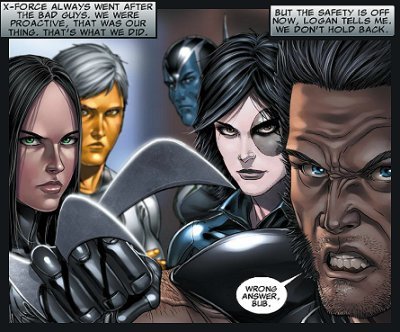 established X-Force. Domino took a shot at Vanisher with her sniper rifle, but inadvertently hit Wolverine in his adamantium skull when he leapt into the path of her bullet. After comparing notes, Domino joined X-Force full-time and they successfully curtailed the Vanisher, forcing him onto the squad as well. This version of X-Force was more severe than past versions. With mutantkind on the brink of extinction, Cyclops assembled them as a kill squad to eliminate any threats to the X-Men or mutants in general with extreme prejudice, without letting the rest of the X-Men know of their existence. [X-Force (3rd series) #8-10]

Domino openly became part of the large population of mutants loosely associated with the X-Men out of their new hometown in San Francisco, taking an apartment in Nob Hill. She was also on-call for Wolverine and X-Force for their “off-the-book” missions. During a trip to Japan, Domino was placing flowers on the grave of Mariko Yashida as a favor to Logan when she caught the Sisterhood body-napping Kwannon. After alerting the X-Men to the new threat, Domino got a call back from Logan when the Sisterhood struck in San Fran: they were planning to resurrect the body of Jean Grey as a vessel for their leader, the Red Queen. As luck would have it, Domino happened to be in Westchester when Logan called, and got to Jean’s gravesite before the Sisterhood did. She exchanged Jean’s casket for a similar one and the Red Queen burned herself out trying to possess an inferior body. [Uncanny X-Men (1st series) #508, 511]

When the X-Men relocated to an island off the coast of California called Utopia, they drew attention from some unfortunate sources. After a recent embarrassment against the X-Men, Norman Osborn wanted revenge on the group. He paid off Ellis Kincaid, the estranged father of one of their younger members, to create a public debacle about being "denied access to his underaged daughter". And to make an already bad situation bat-sh*t insane, Deadpool arrived in San Francisco at the same time, looking to be accepted by the X-Men. Cyclops assigned Domino to keep an eye on Wade so that he didn't do something crazy...like decide to assassinate Ellis Kincaid. Which he did. What followed was a comedy of errors and PR nightmare as Domino and Wolverine tried to prevent Wilson from killing Kincaid in the name of the X-Men. Deadpool used some suitably bizarre weapons against Domino, including a swimming pool full of flapjacks and a chicken in the air ducts (the latter due to a phobia Wilson tricked Domino into admitted to him). In the end, however, the whole ordeal turned out to be an elaborate plot by Deadpool to manipulate the X-Men into saving Kincaid, distancing themselves from him, and revealing Osborn's hand in it all at the same time. Still, Domino and the X-Men put Deadpool on a bus out of town and hoped not to hear from him again for some time. [Deadpool (3rd series) #16-18]

At one point, Domino received a tip from Silver Sable about a meeting between A.I.M. agents. She took the opportunity to go after the super-scientists, partly in retribution for their attack on Milo Thurman years ago. The information was actually a ruse, however, putting Domino in position to accidentally learn the true identity of the Red Hulk. Spotted by the Hulk, Domino barely escaped with her life, as Red was desperate to maintain his secret identity. The Red Hulk soon came after her again with his Code Red mercenary team, but Domino had summoned X-Force for back-up by that point. Domino and Elektra from Code Red realized she had been set up by parties unknown, and joined forces to find out whom. They were in turn confronted by the new Red She-Hulk, thrown into the mix for good measure by Red Hulk's handlers, all as part of an exercise to show him he was vulnerable and expendable. Back at Silver Sable's, Domino and the Red Hulk reached an understanding: she kept quiet about what she saw, while he didn't reveal X-Force's existence to the public either. [Hulk #14-17, Incredible Hulk (2nd series) #607-608] 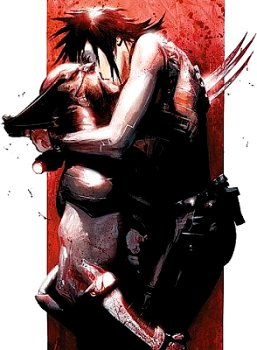 One night, the Assassins Guild caught up with Domino on Nob Hill. Their killers beat her senseless before leaving a 24 hour deadline to bring them the money which Domino had discovered weeks earlier. Domino got Wolverine involved for added muscle by playing on the intense sexual attraction between them. Soon they were both being hunted by the Assassins Guild and an assortment of hired killers. When the Hand located them as well, the situation became open mayhem and chaos. Fortunately, the rest of X-Force arrived and Wolverine got the drop on Belladonna, the Guild’s mistress. In exchange for her life, she agreed to call off the mark on Domino and allow the cash to be donated to charity. Domino saw to it that the funds were given to a Japanese orphanage, though she kept a portion of the millions for herself, much to Wolverine's chagrin. [X-Force: Sex and Violence #1-3]

Meanwhile, X-Force’s attention was split between two ever-increasing, world-shattering threats. The mutant-hating cyborg Bastion and the immortal witch Selene each gained possession of a Technarch transmode virus, and were using it to pursue their own independent goals. Domino was also briefly reunited with Cable in the distant future, following his return from the dead. A single new mutant birth had occurred since M-Day and Nathan took the child into the future to keep her safe from those who wished to harm or exploit her. Cable’s broken time machine only allowed him to move forward in time, however, and he could not return to the present. Fearing the worse, Cyclops sent Domino and X-Force after Nate when they located his temporal signature in the year 2973. X-Force helped Cable protect the new mutant – now a nine year old girl named Hope – from the insane Bishop, Stryfe and even Apocalypse himself. Ultimately, though, Cable and Hope moved on further into the future while Domino and X-Force returned to the present alone. [Messiah War]

Domino and X-Force managed to bring down Selene permanently when she attempted to claim godhood by absorbing the souls of over a million mutants, living and dead. Domino and Vanisher went down to Brazil for some R&R as the team tried to take a well-deserved break.  [Necrosha] 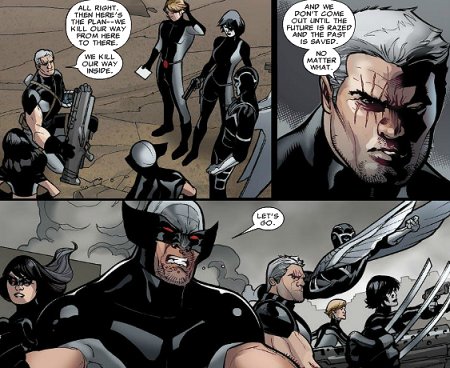 Only three days later, however, Cable and Hope returned to the present and triggered Bastion’s endgame. X-Force returned to San Francisco, but was caught in a temporal membrane that cut Utopia off from the rest of the world. Bastion linked them to an apocalyptic future where super-advanced Nimrod Sentinels were being sent back in time, five at a time every five minutes, until Hope, the X-Men and all mutantkind were dead. Cable, Domino and X-Force jumped into that future to stop the Master Molds from producing any more Nimrods. They succeeded in disabling the Sentinel production, but Cable sacrificed his life to bring them back to the present. Domino attended the memorial held for Nathan, alongside the rest of the mutant population. [Second Coming]

With Hope literally and figuratively returned to the X-Men, Cyclops disbanded X-Force. Wolverine secretly restarted the team on his own but, for some reason, chose not to involve Domino in the revised group. Domino remained one of the X-Men’s reserve members on Utopia. [New Mutants (3rd series) #25] She made herself useful and helped target and disable the Sentinel uprisings around the globe triggered by the new Hellfire Club. When Cyclops and Wolverine had a major falling out that divided the mutant population, Domino chose to remain with Cyclops' faction on Utopia. [X-Men Schism #2, 5]

Although X-Force was (presumably) no more, Cyclops still saw the need for a security team to actively watch out for potential threats to Utopia and mutantkind in general. Led by Storm and Psylocke, Domino was recruited into this security team for her first official stint as a core X-Men team member. While following up on some intelligence, Domino uncovered black market trading of damaged Sentinels in the disputed region of Europe. She traced the sale to Puternicstan, a 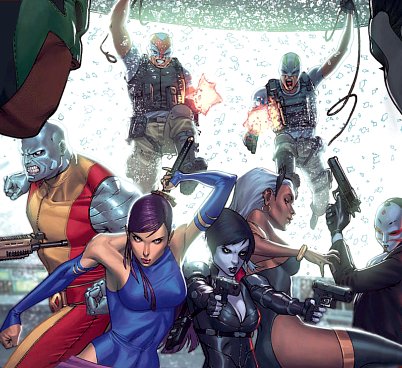 small country with limited resources caught between high-powered neighbors like Latveria and Symkaria. Domino alerted Storm and the security team to her discovery,  and they joined forces with the U.S. emissary War Machine to prevent Puternicstan from launching a flight of Sentinels at Symkaria out of vengeance for past wrongs. [X-Men (3rd series) #20-23]

Since their formation, the security team has expanded their operations under Storm’s command. Domino now operates out of a perpetually mobile headquarters, an energy-efficient flying wing designed by Madison Jeffries and the science team to allow rapid placement into any hot spot on the globe in a matter of hours. [X-Men (3rd series) #30]