Angelica Jones lived a rather unassuming life up until the manifestation of her mutant powers. Her mother died when she was young, and so Angelica was raised by her father and grandmother. In order to make ends meet, the Joneses had to move quite frequently while Angel was growing up, going wherever her father Bart could get work. When she was 13, Angelica and her family moved to 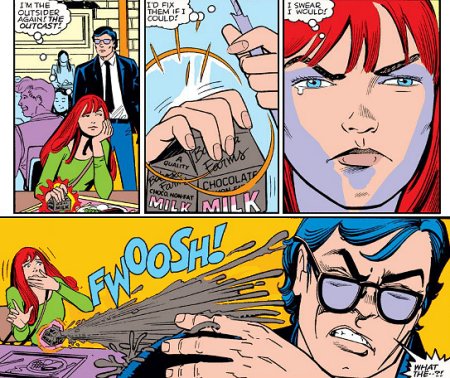 Morristown, New Jersey, where she started high school. On her first day at West Morris High, an unpleasant girl named Cassie and her group of friends took an instant dislike to Angelica the moment she stepped off the bus. When Chuckie Belson, quarterback of the football team, started paying attention to Angel, Cassie's jealousy made her act even more spiteful towards Angelica. After a particularly hateful response to her attempt to make friends in the lunchroom, Angelica began to fume at how poorly the other girls were treating her. This led to the first manifestation of her mutant power, a microwave surge which caused her chocolate milk to explode.

This manifestation registered on Mutivac, the White Queen's personal mutant detector at the Massachusetts Academy, and drew the personal attention of Ms. Frost herself. A few months later, Angelica entered an ice sculpture contest at Chuckie's suggestion. When she arrived at school to put the finishing touches on her angel statue, though, Angelica found that Cassie and her friends had destroyed the sculpture just before the judging was to take place. Humiliated, Angel's microwave powers once again released themselves, vaporizing all the sculptures in the contest. Angelica 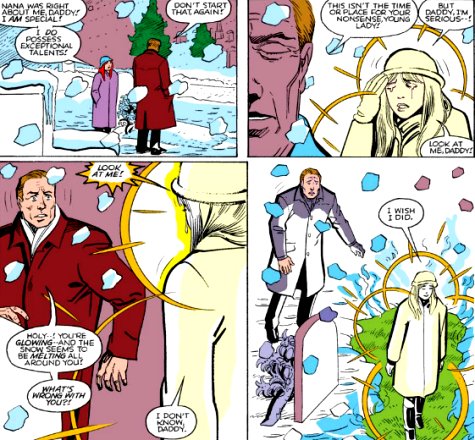 panicked when she saw what she had done, and ended up melting the receiver at a nearby phone booth when she tried to call home. After walking home by herself, Angelica suffered yet another shock when she found an assortment of emergency vehicles clustered around her house. Tragically, her beloved but elderly Nana had died of a stroke that same afternoon. A few days later, at her grandmother's gravesite, Angelica revealed her microwave power to her father, but his fearful reaction kept him from offering her the reassurance she needed, and Angel began to withdraw even further into herself. Still, all this mutant activity allowed Emma Frost to pinpoint Angelica's location with Mutivac, and she approached Bart Jones about registering Angel at the Massachusetts Academy to receive the training and control for her powers that she needed. Professor Xavier and the X-Men arrived only minutes too late, just in time to see the Jones family accept the White Queen's offer. [Firestar #1]

Considering her the perfect candidate to be trained as an assassin, Frost kept Angelica separate from her other students, the Hellions, and gave her individual care and training. In order to constantly shape Angelica into the killer she wanted, the White Queen gave her a special bracelet as a gift, which contained a miniaturized hallucinator device to help warp Angel's conscious and subconscious mind, bending her naturally peaceful demeanor to suit Frost's needs. Randall Chase, one of the Hellfire Club mercenaries, was named Angel's personal bodyguard as well, and he and Ms. Frost were virtually the only people Angelica had contact with at the Academy, allowing Frost to control her interactions more easily. The White Queen gave Angelica plenty of affection and attention, even allowing her to regularly ride a horse named Butter Rum at the Academy stables. However, Frost also arranged several "accidents" with Angelica's microwave powers to convince the girl she was too dangerous to be around other people for very long, while the hallucinator fed Angelica subliminal images of the X-Men trying to hurt and kill her and Ms. Frost.

In one particular instance, Frost arranged a dance at the Massachusetts Academy, and invited the New Mutants from Xavier's School to attend. Ms. Frost then allowed Angelica to "convince" her to let the girl attend, despite the danger posed by her powers. At the dance, Roberto DaCosta and Sam Guthrie of the New Mutants noticed Angel standing off by herself, and Bobby pushed Sam into dancing with her. Ms. Frost then mentally stepped in, manipulating Sam into suggesting the two of them go outside for a walk, and the two ended up kissing. At that very moment, Ms. Frost interrupted telepathically, furiously chiding Angelica for "risking the boy's life" with her microwave powers. Shamed and embarrassed, Angelica ran off to the stables to compose herself, only to have them catch fire all around her. In the resulting blaze, her beloved horse Butter Rum was killed. Little did Angelica know that Ms. Frost had arranged the entire incident, pre-setting the fires to simulate an uncontrolled outbreak of Angel's microwave power, and telepathically stopped the horse's heart herself. The whole tragedy was designed purely to drive Angelica away from all other people, making her seek comfort and safety with Ms. Frost and no one else. [Firestar #2] 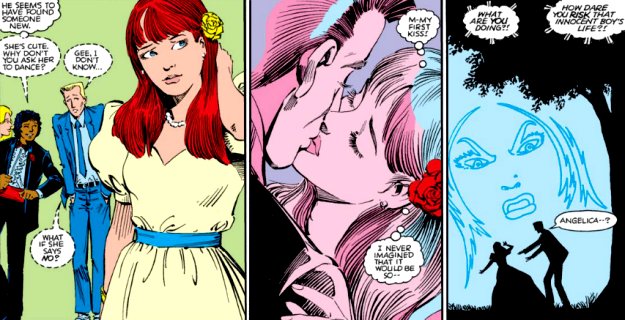 Emma's carefully organized plans were briefly interrupted, however, by one of her own students — the mind-manipulating Empath of the Hellions. When their fellow Hellion Thunderbird decided to attack Xavier and the X-Men on a personal vendetta, Empath and Roulette chose to tag along for kicks. For extra firepower, Empath emotionally manipulated Angelica into falling in love with him, and then convinced her they were all on a special mission from the White Queen. At his command, Angelica helped the Hellions assault the X-Men at the NORAD base in Cheyenne Mountain, under her newly adopted guise of Firestar. She and the Hellions were defeated, however, and Firestar and Thunderbird were taken back to the X-Mansion. Despite seeing that Professor Xavier and his team were far nicer than the White Queen ever told her, Angelica chose to decline Xavier's offer to transfer to the School for Gifted Youngsters, and remained loyal to Ms. Frost. [Uncanny X-Men (1st series) #193]

In her next attempt to manipulate Angelica towards her way of thinking. Ms. Frost arranged for her student to return home to West Morris for the first time in over a year-and-a-half to see her father. Hardly done out of the goodness of her heart, the White Queen knew that Bart Jones still harbored prejudices against mutants and fear of his daughter's ability, a rejection which would only further harden her against humanity. 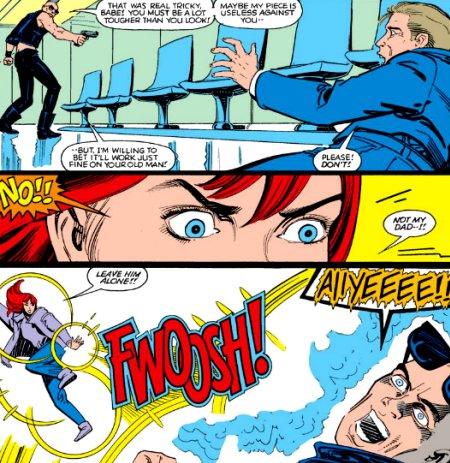 Sure enough, Bart freaked out when Angelica picked up their family cat, Pum'kin, snatching the cat away from her for fear that Angelica would irradiate the animal. Deeply hurt by her father's reaction, Angelica and Randall decided to return to the Massachusetts Academy the next morning. At the airport, Ms. Frost took Angelica's alienation a step further. She had an undercover agent bump into Angel with a rigged boom box; when the machine burst into flames as pre-planned, the agent accused Angelica of being a "mutie freak" who did it on purpose. Other agents in the crowd escalated the encounter, creating a full-blown riot as people assaulted both Angelica and her father. Forced to fight back to protect herself and her dad, Firestar deliberately used her powers on another human for the first time when the undercover agent threatened her father with a gun. [Firestar #3]

With this part of their plan completed, Emma Frost and Sebastian Shaw then began specifically prepping Angelica to one day soon assassinate their rival in the Hellfire Club, Selene. Frost staged an assassination attempt at her office, while Angelica was present, and blamed the event on the Black Queen. With the help of the hallucinator, Frost began conditioning Angelica to hate Selene enough to want to kill her. With the stage set, Ms. Frost invited Angelica to accompany her to a formal dress ball that the Hellfire Club was throwing, where Selene would be in attendance. Once there, the White Queen planned to push Firestar into making the assassination. 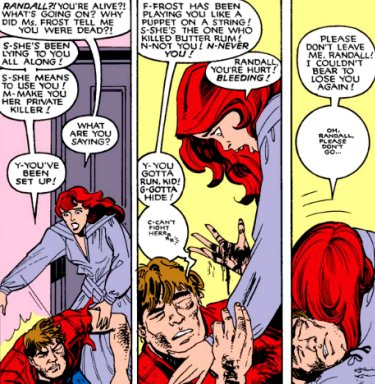 Unfortunately for Frost, however, Randall Chase had become genuinely protective of Angelica during their time together, and was planning to stop Angelica from making her suicidal attack on the Black Queen. Frost sensed Randall's intentions before he could act on them, and took him prisoner. She then used this to her advantage to convince Angelica that Randall had been killed by the Black Queen while uncovering information about her. Frost's machinations finally collapsed all around her when Randall escaped captivity the night of the formal ball. Mortally wounded in his escape, Randall still managed to reach Angelica at the dorms and confess everything Ms. Frost had done to her over the years before he died at her feet.

Enraged, Firestar confronted the White Queen in her underground complex. Driven by her anger, Firestar successfully defeated her guards, weapon systems and the White Queen herself. She displayed both power levels and control over her abilities that she has previously been unable to reach. 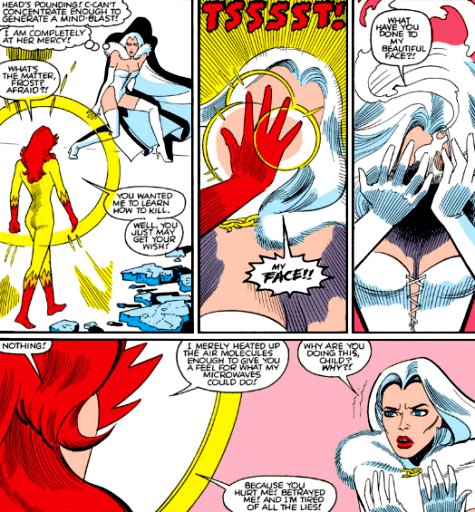 The White Queen was so overwhelmed by Firestar's attacks that she was unable to defend herself with her psychic powers. Angelica acted as if she was going to use her powers to disfigure Emma by touching her super-heated hand to Emma's face. She only came close enough to super-heat the air but her message was clear. Firestar demanded that she and her family be left alone from then on. She allowed Frost to flee before she emphasized her point by completely annihilating the entire underground complex beneath the Massachusetts Academy. Humiliated, Frost vowed to seek revenge but was counseled out of this course of action by Sebastian Shaw who felt they had wasted enough time and resources on Firestar. [Firestar #4]