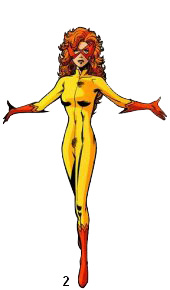 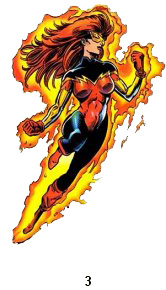 1) While training under the White Queen, Angelica briefly wore the standard Hellions uniform. This costume was composed of two shades of magenta-purple fabric — a darker base shade with a lighter shade covering the left arm, crossing diagonally over the body and down the right leg. The gloves and boots were the same two shades, alternating to accent the color they touched, with a dark colored left glove and right boot, and a light colored right glove and left boot. [Firestar (1st series) #2]

2) Firestar's personal costume was primarily a yellow, one-piece jumpsuit, covering her up to the neck. She wore red gloves and boots, flaired at the ends with a jagged layer of orange, resembling flame. Finally, she wore a large red mask covering her face, with stylized points on the outside. [Uncanny X-Men (1st series) #193]

3) When she decided it was time for a change, Firestar adopted a new costume assembled for her by Namorita. This uniform was a black body suit extending up to her neck, with a red one-piece bathing suit over her mid-section. The top of the red section was cut like a flattened 'V', with a thin yellow flame design separating the red and black portions. She wore forearm length opera gloves over her red sleeves, colored yellow and with a similar "fiery" cut at the ends. She also wore a smaller set of red gloves over her hands and red boots. Firestar covered her eyes with a small yellow visor. She later started wearing a black leather jacket over her costume, with a flaming star on the backside and a fiery motif on the front lapels as well. [New Warriors (1st series) #31] 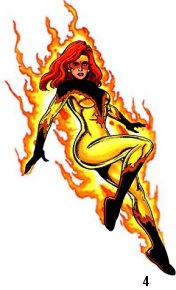 4) After joining the Avengers, Firestar was gifted with a new costume by Janet van Dyne, the Wasp. The suit was primarily yellow, like her original uniform, with black boots and gloves lined by a red-orange fiery trim. The chest section of the costume was a source of controversy for Angel. The Wasp first designed the suit with an open V slit and plunging neckline, showing off far more cleavage than the modest Angelica was willing to expose. The V cut was lined with a stripe of orange "fire" coming from each side of her neck, meeting with two other "fire" stripes coming from across her shoulders, and finally meeting on her lower abdomen as a "fiery star" symbol. The area between her chest and shoulders was colored black, and expanded behind her shoulders over her backside. The two fire stripes that crossed her shoulders tapered down into another "fiery star" on her lower back.

Firestar initially made some hasty modifications to the costume, wearing a red or orange body sleeve underneath the suit to cover up her chest. She later modified the costume further, removing the fire stripes that went up to her neck, and replacing the entire area below her neckline with a uniform black color. [Avengers (3rd series) #8-13]

--) Firestar returned to her classic "yellow jumpsuit and red mask" look when she joined the Young Allies, and it is this uniform she continued to wear as a member of the X-Men.