Little has been revealed about the early life of Joanna Cargill the mutant also known as Frenzy. As a black woman and a mutant, Joanna faced a lifetime of discrimination and oppression. This led her to become a bitter and angry young woman. Sometime after her mutant powers manifested, she decided to use them for profit as a mercenary for hire. During an assignment early in her career, she crossed paths with the mutant thief called Gambit. The two fought and though details of this run-in have not been revealed, like many Joanna developed a love-hate relationship with the charming Remy LeBeau who she encountered professionally on several occasions. [Gambit (3rd series) #20]

When Joanna watched the trial of Magneto, she realized that he was the voice of mutantkind and that humanity was seeking to silence that voice. She was inspired to put her power to use as Magneto had. Frenzy found the opportunity to do so as a member of a mutant team called the Alliance of Evil under the employ of Apocalypse. It is unclear whether the team was assembled by Apocalypse himself or if the group had been formed earlier and he merely hired them to do his bidding. In either case, Frenzy was one of the more competent members and the obvious leader of the group. To ensure that the Alliance remained loyal to his commands, Apocalypse used a mutant drug addict named Michael Nowlan whose powers allowed him to amplify the abilities of other mutants. Nowlan’s power boosts were highly addictive and had painful withdrawal effects for those who grew attached to his augmentation of their abilities. Apocalypse used this as leverage to keep Frenzy and the Alliance completely under his control. By this time in her mercenary career, Cargill was a hardened and competent professional. She was highly effective in combat and coldly sure of her abilities. She also demonstrated a certain degree of disdain for her less savvy teammates.

Apocalypse ordered the Alliance to capture the young mutant called Rusty Collins. When Frenzy’s dim-witted teammate Tower failed in his solo attempt to capture the pyrokinetic, Frenzy took matters into her own hands. Collins sensed Frenzy’s malicious intents and tried to resist but she made it clear that he did not have a choice in the matter. Her attempt to kidnap Rusty was interrupted by X-Factor. After a brief battle with the entire team, Frenzy realized that she was outnumbered and retreated.

When Michael Nowlan escaped from Apocalypse, the Alliance was sent to bring him in. Nowlan was desperate to escape but the fact that Frenzy and the other members of the Alliance were addicted to his power meant that they were highly motivated to return him to Apocalypse. They

abducted Nowlan’s wife and used her as leverage to ensure his cooperation.  This brought them directly into conflict with X-Factor who had already found Michael and offered him their help in controlling both his power and his drug addiction. Seeing his wife in danger, Nowlan reluctantly aided the Alliance. With their powers amplified, Frenzy and the Alliance handily defeated X-Factor and returned Michael to Apocalypse as ordered. Frenzy was not happy when Apocalypse ordered her to place Nowlan in a monitoring machine that nullified his power. Apocalypse brutally reminded Joanna who was in charge. Despite her overwhelming addiction to Nowlan’s enhancement power, Frenzy did not challenge Apocalypse further.

X-Factor tracked the Alliance to Apocalypse’s lair where he had resumed his experiments on the unstable mutant. During the ensuing battle, Nowlan watched in horror as his wife was killed by a stray bolt of electricity from Alliance member, Stinger. His power surged out of control, magnifying the powers of all the mutants present. The Alliance and X-Factor were evenly matched but Nowlan’s power eventually burned itself out and he died as a result. Apocalypse departed, telling Frenzy and the Alliance that they had proven themselves to be among “the strong” but that they should not attempt to find him. The police arrived and took the Alliance into custody. [X-Factor (1st series) #4-6]

Frenzy and the Alliance remained in jail for several months, during which time they all had to deal with painful withdrawals. When the United States government enacted the Mutant Registration Act, Frenzy and the Alliance escaped from jail and took to the streets of New York, creating mayhem to send a message to the authorities that mutants couldn’t be contained much less 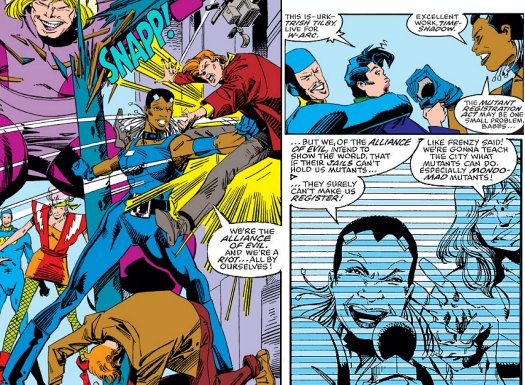 forced to register against their will. Their attack was captured by the media and Frenzy spoke on the group’s behalf. She boldly added a public challenge to X-Factor to try and stop them. X-Factor and their students rose to the occasion and confronted the Alliance. Frenzy used the opportunity to once more try to recruit young Rusty Collins. Collins turned her down once again and helped X-Factor defeat the Alliance. Frenzy and her colleagues were taken into custody by Freedom Force. [X-Factor (1st series) #33] 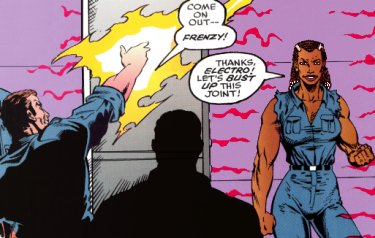 Frenzy was taken to the Vault where she remained for some time. While there, she participated in a mass escape attempt instigated by Mentallo and Venom. Both the Avengers and Freedom Force were sent in to stop the violence that ensued. Frenzy fought hard for her freedom but the Avengers found a way to use Mentallo’s mental powers to psionically calm the criminal combatants long enough to secure the facility. Frenzy remained incarcerated there for an undetermined period of time. [Avengers: Deathtrap – The Vault]

Frenzy was eventually liberated and reunited with her former teammates Tower and Stinger. The Alliance took an assignment from Advanced Idea Mechanics (AIM) to serve as muscle and bodyguards for their operatives Harness and Piecemeal. Their objective was to use the energy-absorbing Piecemeal to collect the  dispersed energies of the reality-warping mutant Proteus to 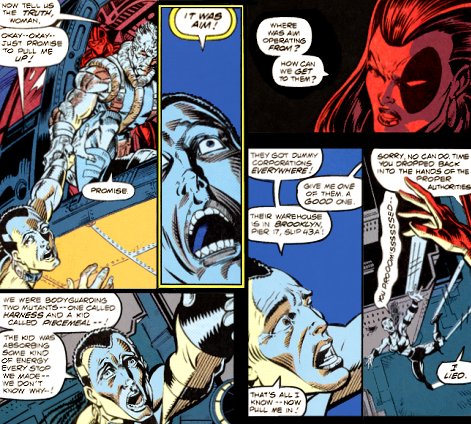 use for their own financial gain. One of their targets happened to be a private school where the mutant wards of X-Factor resided. During the assault, Artie, Leech and Wiz Kid were injured. This assault and the sheer brutality they used against the mutant children, drew the attention of X-Force. Frenzy’s efforts on AIM’s behalf led her into direct conflict with X-Force, who was investigating the mutant energy fluxes. X-Force handily defeated Frenzy and her allies and Cargill once more found herself incarcerated. To her great surprise, X-Force and their allies the New Warriors soon broke her out. She leapt to their copter and Cable caught her. But he refused to pull her onboard, offering to do so only if she revealed the truth about who had hired the Alliance. Frenzy told him it was AIM and revealed their location and objective. Despite his promise to pull her up, Cable dropped Frenzy back into the prison yard. [New Mutants Annual #7, New Warriors Annual #1] 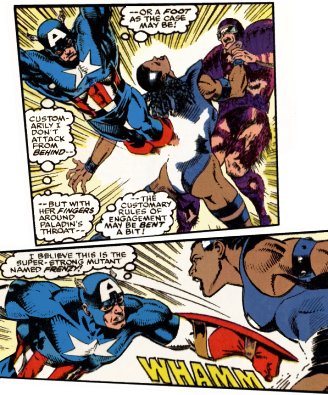 Her stay in prison was brief, as Frenzy was soon recruited into the all-female army of Superia. As part of this immense community of women warriors, Cargill was given an allowance and a home on Superia’s island base. As one of the fifty super-villainesses that comprised Superia’s Femizons, Frenzy enjoyed their gladiatorial sparrings and the general camaraderie. She was used to taking orders and serving others, so this situation provided her with a comfortable life for a short time. Her affiliation with Superia brought Frenzy (as well as the rest of Superia’s army) into conflict with Captain America and his ally Paladin. Joanna was recognized and swiftly defeated by Captain America. After this defeat, Frenzy remained with the Femizons for a time until their operations were completely disrupted by Captain America and his allies. [Captain America (1st series) #389-391, 411-414]