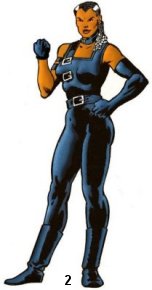 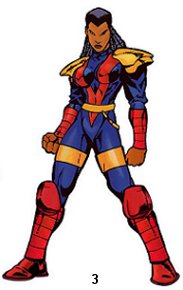 1) Frenzy debuted in a dark blue or black leather outfit adorned with heavy buckle. The top was sleeveless and cropped to leave her midriff bare. It opened in the front like a vest and was fastened in place by two broad leather straps that buckled on left. When cinched closed, this created a square-cut neckline and a small square below this that revealed a bit of cleavage. Frenzy wore matching leather hotpants and knee-high boots. She wore various leather bands with silver buckles – one on each wrist and two on each of her thighs. Around each bicep she wore a leather band with large, heavy studs. Her neck was adorned with a buckled leather collar and she wore a matching belt, again with a large squared buckle. Her dark hair was braided with silver beads at the end and two distinctive square patches of white at each temple. [X-Factor (1st series) #4]

2) When she next appeared, Frenzy wore a similar leather outfit. This version was slightly more conservative. Black leather pants replaced the hotpants. Her top was now more like a black leather tank top, with a square neckline and metal buckles adorning the left-hand side. With this she wore a varying combination of gloves, short and long, as well as studded armbands. She alternated between this and her original costume for quite some time. [X-Factor (1st series) #5]

3) When she joined the Acolytes, Frenzy dropped her codename and began wearing the standard Acolyte uniform. This consists of a dark blue (sometime purple) bodysuit with a large V pattern in scarlet on the torso. This is complimented by heavy armored gauntlets and boots in either red or gold. Gold rounded shoulder pads or a full harness and a matching gold armored belt were often included. On some missions, the Acolytes also employed gold communication headsets. [Uncanny X-Men (1st series) #298]

4) When Joanna was mentally coerced into joining a hastily assembled X-Men squad by Jean Grey, she wore an outfit that blended elements of her Acolyte uniform with those of a standard X-Men costume. This mismatched ensemble included a navy blue bodysuit with a field of red on the top. She retained the distinctive gold armored shoulder pads of the Acolytes with a red cape added. She wore the standard yellow boots, gloves and ornamental leg straps from the X-Men uniform along with a matching X belt. By this point, she had stopped braiding her hair and now wore it cropped in a short afro. [Uncanny X-Men (1st series) #392]

5) When the Acolytes disbanded, Cargill wore a costume very similar to her second look. This version was black leather and rather than silver buckles on one side, it was adorned with two white squares on both side at the shoulder. She also dropped the mismatched gloves, studded armbands and excessive buckles. Instead, she opted for long black evening gloves and a simple neck band. She also wore a black leather belt with a large, silver buckle and black combat boots. She now wore her hair in thick dreadlocks. [X-Men Annual (2nd series) #1]

6) When one of Legion’s many personas transformed the mutant nation of Utopia, an alternate reality was created. With this came a whole new look for Frenzy. The top was two pieces: a short, form-fitting black “shrug” with long sleeves that buttoned at the collarbone and a tight, turquoise blue undershirt with a triangular window that revealed her cleavage. A pair of gold vertical bands accented the sides of this top. With this she wore armored gauntlets with a stone-like appearance, black leggings . She also wore armored boots on some occasions. Frenzy generally wore fingerless gloves and brass knuckles with this outfit. Her hairstyle was also dramatically different. Her hair was shaved short on one side with a white patch. The opposite side was straightened and left long with a few rows of braided hair with beads underneath. This look was much softer than her previous hairstyles. Shortly after the Age of X ended, Frenzy decided to try and create a life for herself closer to the one she had enjoyed in the Age of X reality, so she adopted this look for real. [X-Men Legacy #245, 249]