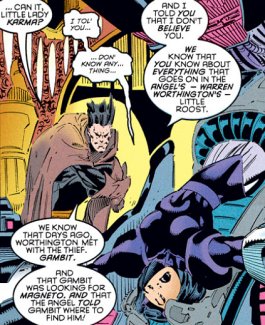 In the Age of Apocalypse, Karma was Angel’s assistant, helping him manage his nightclub, Heaven, while maintaining a neutral stance in the civil war between Apocalypse’s followers, the mutants who opposed him, and the human population trying to survive. Part of Karma’s job was to use her mental powers to gather information from their guests and ensure that none would remember anything suspicious they might have witnessed. Karma was kidnapped by Apocalypse’s troops to be interrogated on matters regarding the X-Men. Karma kept mum as long as she could but when the Shadow King was released on her, she gave away the desired information before dying from the torture. Learning of his assistant’s fate, Angel finally took a stance and went on a suicide run against Apocalypse’s fortress. 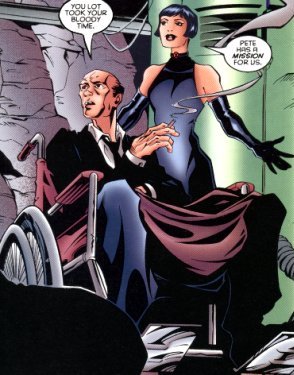 In a reality strikingly similar to the Days of Future Past (if not that same reality), Karma was part of Pete Wisdom’s resistance force in Great Britain in the year 2013. She only answered to her codename and had apparently suffered terrible losses. Trying to cope with her situation, Karma displayed a slightly sardonic sense of humor and had refined her powers to the point where she could perceive things through a person’s eyes without really possessing them. She and Pete Wisdom were likely the only members to survive the team’s last mission against Black Air, as they were not physically present but only watched through Captain Britain’s eyes .

In the Ultimate universe, Karma is a telepath working for SHIELD’s black-ops operations. After being chosen to  assess whether the president had been in any way telepathically influenced by Xavier, the president was so impressed by her that he suggested she join Emma Frost’s media- 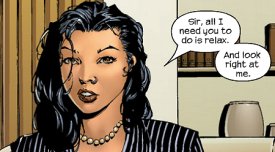 friendly group of mutants, which was designed to replace the X-Men in the government’s graces. However, the group was attacked by Sentinels the day it was presented to the public and had to be saved by the X-Men. Karma helped flush out the government officials behind this conspiracy and has presumably gone back to working for SHIELD.

In the reality created by the Scarlet Witch called the House of M, mutantkind was no longer oppressed thanks to the efforts of Magneto. In this new world, Karma held the position of 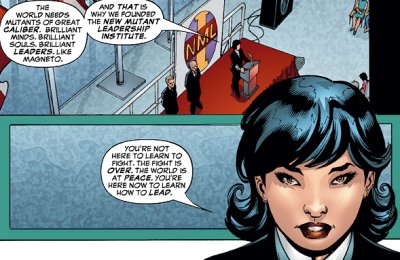 headmaster of the New Mutant Leadership Institute, which taught the younger generation of mutants to become the visionaries of tomorrow. The student body included Jubilee, Wallflower, Quentin Quire and the Stepford Cuckoos, among others. The main function of the Institute was to teach the young mutants to lead and avoided combat training and mastery of their mutant powers. Nevertheless, these future leaders found themselves battling against and alongside their counterparts in the Elite Squad of trainees at SHIELD, who were trained by Danielle Moonstar.

In another alternate future, the X-Men met their End when several villains banded together against them. In that timeline, Karma’s life had progressed in many of the ways one might expect. She was still affiliated with the Xavier Institute and was devastated by its utter destruction. Shan was found by Kitty Pryde on the outskirts of the crater where the school had once stood. Despite

the many years that had passed, Xi’an clearly still had unrequited feelings for Kitty. Karma assisted in the evacuation of the Xavier Institute and afterward, spent most of her time helping at the camp set up for the surviving Institute students. She later took part in the final battle against Cassandra Nova, the villainess behind their recent troubles.