Xi’an (pronounced “Shan”) and her twin brother, Tran, were both born mutants in Vietnam during a time of war. Their father was an honest but unpopular South Vietnamese officer, who was always getting the worst assignments. The family, consisting of his wife, the elder twins Shan and Tran and the far younger twins Leong and Nga, traveled with him on his duties. His position afforded them a good life and his children were well-educated. But as the conflict escalated, they soon found their lives in danger. When Xi'an was still a teen, a soldier tried to murder her brother. This situation caused her mutant powers to manifest and she instinctively stopped the man with her mutant power to possess the minds of others. Tran found he had the same talent and gleefully used it to force the man to kill himself.

Tran told their uncle, Nguyen Ngoc Coy, an influential general whom the rest of the family distrusted, about their powers. He boldly added that Xi’an feared using her powers but that he did not. Eventually, their family was forced to flee when South Vietnam fell to Communist rule. Tran was the only one rescued by their uncle, Nguyen. Xi'an was forced to use her powers to save her family and help them escape. Unfortunately, she was weakened by illness and hunger and unable to protect them from the Thai pirates that attacked the small, overcrowded boat headed for America that they had boarded. The men on board, including her father, were killed and Xi'an and the other women were raped. Xi'an's mother didn’t survive the ordeal. Shan survived and was able to get her younger siblings to safety in the U.S. Though barely a legal adult herself, Xi'an now found herself with the responsibility of caring for her far younger siblings, as a single parent. 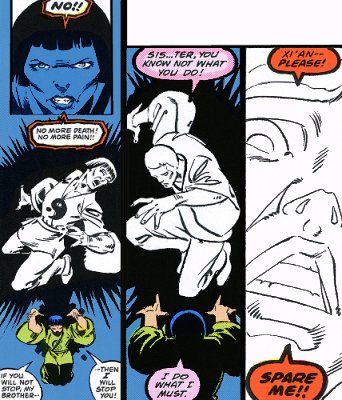 Xi'an and the twins were reunited with their uncle and their brother Tran when they arrived in the United States. Her uncle had quickly become a successful crime lord with Tran's mutant powers of possession at his disposal. Shan refused to join him and sought help from Father Michael Bowen, an old friend of her family. Bowen had established a relief agency for boat people and he helped the well-educated young woman find a job. However, her uncle kidnapped Shan’s younger siblings in an attempt to force her into his service. In desperation, Shan possessed Spider-Man (who she believed to be a criminal) and used him in an attempt to save her little brother and sister. She was subsequently confronted by Spider-Man and the Fantastic Four. Moved by her story, they agreed to help but were turned against each other when Tran used his powers to force the Fantastic Four to attack Spider-Man. In order to save Spider-Man, Shan had to kill her brother by absorbing his life essence into herself. The Fantastic Four aided Xi'an in getting her siblings back and contacted Professor Xavier to help her master her mutant powers. [Marvel Team-Up (1st series) #100]

Shan took the code-name Karma – the sum of all good and bad deeds - after absorbing her evil brother. She was asked to join Xavier’s training team, the New Mutants. Xi’an marveled at the chance to better control her gift, though was about to decline, as she had to take care of her younger siblings and find a job. Xavier found a good solution for this problem, offering Shan an administrative position as the school's secretary. As the team’s only adult member as well as the

most reasonable and mature recruit, Karma was also named team leader. Unlike her teammates, she did not live at the school but lived in an apartment in Salem Center with her siblings, believing a family should have a place of their own. [Marvel Graphic Novel #4]

After a handful of adventures, Shan's teammate, Dani Moonstar was abducted by the terrorist known as Viper. Professor Xavier was unable to  help as he was busy training Team America, so

the New Mutants tried to wring information from Karma’s uncle. Shan found that she didn’t have the stomach for torturing him and instead agreed to work for him for one year in exchange for the information they needed to rescue Dani. 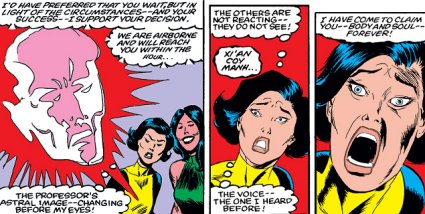 This didn’t come to pass, as a mysterious and malevolent psychic being became interested in Shan. The team managed to save Dani but Viper retaliated by blowing up her complex. Karma was separated from the rest of the team during the conflict, and they believed that she had drowned. [New Mutants (1st series) #5-6] Xavier had his suspicions about what had truly happened to Karma but chose to keep her teammates in the dark in order to protect them.

As Xavier suspected, Karma had fallen under the control of the criminal telepath, Amahl Farouk. Xavier had encountered the twisted Farouk years earlier and killed him during a psychic battle on the astral plane. Farouk's body died when he was defeated but his psyche  survived on the astral plane. Now known as the Shadow King, he possessed Shan’s body, much like she could possess 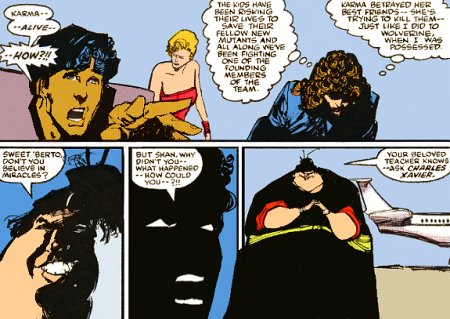 others. Over the course of the next few months, Farouk used his powers, combined with Karma's, to carve out a criminal empire. He also indulged his excessive appetites, causing Karma to become incredibly obese. The New Mutants came to the Shadow King’s attention when Sunspot and Magma were captured to become Gladiators in Farouk’s deadly arena game. Several of the New Mutants followed and freed their friends. In the course of this rescue effort, they learned to their shock that Karma had survived and was the one behind the exploitation of mutants for sport in the Gladiators' arena. [New Mutants (1st series) #29-31]

Farouk/Karma escaped to Madripoor and the New Mutants pursued, feeling responsible for stopping Xi'an's apparent villainy. Underestimating the scope of their foe’s powers, most of them ended up enslaved by Farouk. Those who escaped found an ally in Storm, whom Farouk had been interested in since she was a child. Even with Ororo's knowledge of Farouk, his will was too powerful and he delighted in adding the Windrider to his collection of mutant slaves. Eventually, Magik and Warlock, the only New Mutants still free, found out who their foe truly was and tricked him into losing control of the other mutants.

With the odds a bit more even, Xi'an struggled to regain control. Karma fought a psychic battle against Farouk and with the support of her friends, she bested Farouk and forced him to flee back to the astral plane. She was disgusted with what Farouk had done to her body and begged her friends to let her be consumed in the flames that engulfed Farouk's palace. They refused to leave her and urged her to remain courageous as she had been when she took on Farouk. [New Mutants (1st series) #32-34]