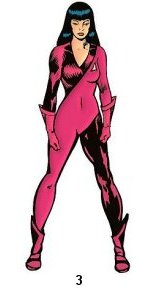 1) When Karma originally met Spider-Man and the Fantastic Four, she wore a wide-sleeved light-green tunic (similarly cut to those worn by martial artists) adorned with the white "yang" half of the yin-yang symbol, and wide black pants and green slippers. Her brother, Tran, wore an identical suit, with the black "yin" half of the symbol. When Shan absorbed his life essence, the entire yin-yang symbol appeared on her tunic. [Marvel Team-Up (1st series) #100]

2) Like the other New Mutants, Karma wore the standard black and yellow school uniform. This became the default outfit she’d switch back to throughout her career. [New Mutants (1st series) #1]

3) After their traumatic experiences at the Beyonder’s hands, Xi‘an and the other New Mutants were sent to Emma Frost for help and briefly joined her team of Hellions. Karma and the others wore the standard Hellions uniform: a tight, v-necked suit in two shades of magenta with a white triangle symbol over the heart. [New Mutants (1st series) #39-40] 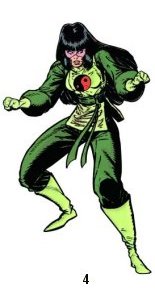 4) When the New Mutants had to rescue the X-Men from Mojo, they wore their graduation day outfits. Karma’s outfit was reminiscent of her original one. A light green tunic with an asymmetrical Chinese-style collar and the yin-yang symbol, over dark green sleeves, loose pants and light green boots. She also wore a pink half-mask. [Uncanny X-Men Annual #10]

-) After quitting the New Mutants, Karma served her criminal uncle before once again trying to live a normal life. On those few occasions she helped her former teammates or the X-Men, she wore the standard X-Men training uniform.
-) As part of the teaching staff at Xavier’s, Shan wore mostly civilian clothes befitting her role as a teacher.

5) When the New Mutants reunited as an official X-Men squad, they adopted a modern update of their original team uniforms. Karma wears a one-piece black spandex costume, with a large yellow-gold X covering part of the chest and running down to the mid-thigh. Yellow boots, gloves and a headband complete this uniform. Since her leg was amputated, Karma has worn a modified version of this suit that leaves her cybernetic prosthetic exposed. [New Mutants (3rd series) #1]