Regan laid low for a while after her run-in with the X-Men, but their paths would cross soon enough when she contracted a deadly disease. When the Inhumans released the Terrigen Mists into Earth’s atmosphere, the mutant population who encountered it had an adverse reaction. The disease was dubbed M-Pox, and anyone inflicted with it would begin to lose control of their powers before dying a gruesome death. Rather than ask for help, Lady Mastermind resigned herself to dying and decided to take out as many other people with her when she went. Hers (and everyone else’s) salvation came thanks to Dani Moonstar, who had the powers of a Valkyrie bestowed upon her. Sensing Regan’s impending death, Moonstar tracked her down and prepared to fight her. 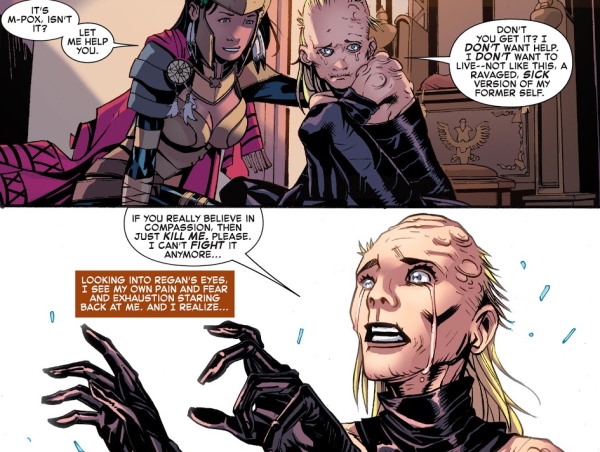 Regan was physically a shell of her former self but was using her illusion powers to disguise how ill she truly was. Moonstar managed to convince Regan to accept help and, in doing so, saved a building full of people from the villain’s selfish actions. Lady Mastermind travelled to the X-Mansion, where she received help from on of the team’s healers. Soon enough, M-Pox was eradicated from the world, letting Lady Mastermind return to her former life. [All-New X-Men (2nd series) Annual #1]

The lives of every mutant on Earth would soon change for the better thanks to Xavier, Magneto and Moira MacTaggert setting up a new island nation of Krakoa. The ambitious project meant that every mutant across the world would be welcomed to the island regardless of their past transgressions. Lady Mastermind was amongst the first wave of villains who stepped foot on the island in a historic moment. [House of X #5]

The new mutant nation boasted many amazing wonders, none more magnificent than the ability to bring any dead mutant back to life. Using five mutants working in conjunction with each other, mutants who had been dead for years were resurrected, including Regan’s father Mastermind. 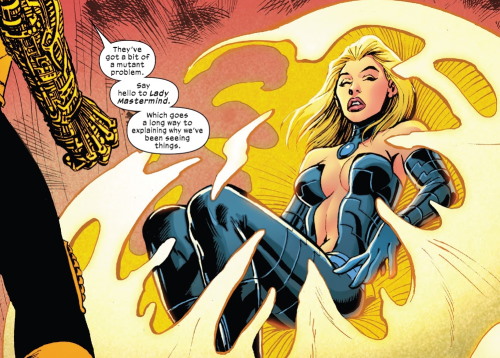 Biological portals were set up across the world, allowing any mutant to travel the globe in the blink of an eye. Lady Mastermind found herself in a bit of trouble soon enough though when she went to use a portal located in the X-Men’s former mansion, only to be ambushed by Sidri hunters.  The aliens had set up a nest in the abandoned building and Regan unknowingly disturbed them. Captured by the Sidri, she sent a psychic beacon to Krakoa, alerting the island to her plight. A team led by Nightcrawler managed to infiltrate the mansion and free Regan from her prison, before leaving aliens to their new home. [Giant-Size X-Men – Nightcrawler #1]

[Note: In Hellions #9-10, Arcade captured one of Jason Wyngarde’s children in a bid to force Jason to work for him. Whilst she was only seen on a computer screen for a few panels, the art looked like it was Regan, whilst the text confirmed it was Martinique. The simplest explanation is that Martinique had dressed to look more like her sister, as this story doesn’t fit in with Regan’s recent appearances.]

Lady Mastermind soon repaid the favor though by coming to the aid of a team of mutants trapped in a literal “plants versus zombies” fight on Genosha. The Scarlet Witch had tried to undo her mass depowerment using a spell, but it went wrong and it brought all the mutants back as zombies. On top of that, Earth was being invaded by plant-like aliens, and the mutants were now caught in the middle. Regan and a team of psyhic mutants arrived on the island just in time to help turn the tide of the crazy battle. [Empyre: X-Men #2-4]

Regan seems to be settling into the new island life well, however it remains to be seen how she manages with the new rules, such as killing no humans.