With Sinister and many of the Marauders dead, Regan went off alone and kept a low profile as she healed. She was eventually brought back into the X-Men’s lives thanks to Madelyne Pryor, who was looking to form her own Sisterhood. Madelyne found Regan in a rare moment of reflection at her father’s grave and offered to bring him back to life in return for her services. Regan was angered to see her half-sister Martinique amongst the Sisterhood and immediately put off the idea. Martinique spoke up, though, and vouched for Madelyne, saying that, regardless of their feelings towards one another, their father could be brought back. Regan still wanted proof and so that night the Sisterhood stole the body of Revanche to use as a demonstration. Using the life forces of the Sisterhood, Madelyne cast a spell and healed the body, transferring the mind of Psylocke inside it. 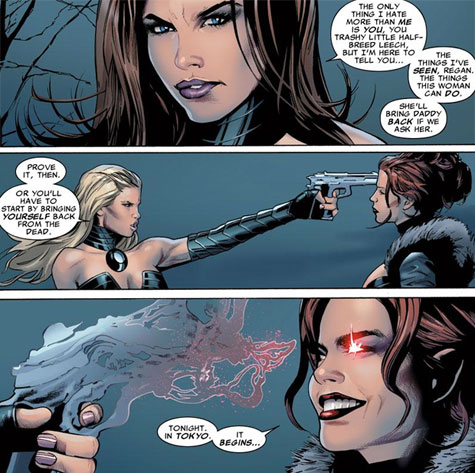 Regan’s doubts were extinguished and Madelyne explained that the next stage in her plan required the Sisterhood to storm the X-Men’s base. They waited for everyone to go to bed and then they struck, with Spiral teleporting everyone inside. Regan was key in trapping the X-Men in a group illusion so that they wouldn’t interfere with the Sisterhood’s plan. She even managed to catch Emma Frost off-guard and trap her in a special illusion before the X-Woman could put her psychic defenses up. Regan’s undoing, though, was her arrogance, as she taunted Emma but underestimated her power. Emma broke free of the illusion and turned into her diamond form, beating Regan black and blue for her troubles. Emma then freed everyone else from Regan’s group illusion, after which the Sisterhood had to escape quickly.

Nevertheless, the Sisterhood succeeded in its plan of obtaining a DNA sample of Jean Grey, the woman Madelyne had been cloned from many years ago. Madelyne was currently nothing more than a realistic-looking astral entity and was looking for a suitable body to be reborn again into the world. The Sisterhood teleported back to base but, with the X-Men hot on their tails, Madelyne needed to act fast. She left Regan and her sister at the base while she went off to try and execute the final stage in the plan. Regan wasn’t happy at being left as bait and in fact they were soon set upon by the X-Men, who beat the girls easily. Madelyne failed in her attempt to be reborn and so Spiral grabbed the remaining Sisterhood, including Regan, and teleported away before any more damage was done. [Uncanny X-Men (1st series) #508-511]

The Sisterhood went their separate ways but Regan and Martinique stuck together, despite their animosity towards one another. They went back to living in their father’s house and it was here that they received an unlikely visitor in the form of a fairy woman. The woman was looking for her daughter and had come to the Mastermind sisters, as they held the key to finding her. 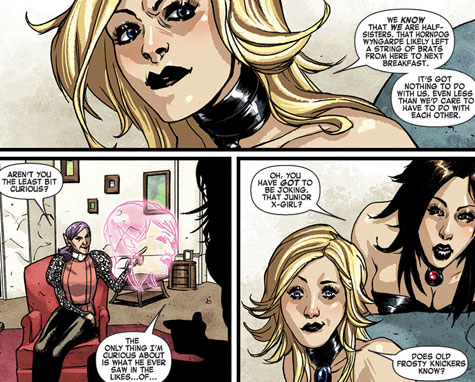 Regan discovered she had another half-sister in the form of Pixie, one of the X-Men’s students. Regan was disgusted at being related to the perky Pixie but not exactly surprised, given their father’s reputation. Regan wasn’t particularly keen on helping the woman either, especially if it meant getting involved with the X-Men, but Pixie’s mother appealed to her ego. After seeing they could be more powerful as a trio, the sisters reluctantly agreed to help and, using the genetic bond the girls shared, a spell was cast to locate Pixie. They found Pixie and discovered she had been kidnapped by demons who were using her to get to her fairy mother’s magic. Despite their different moral compasses, the three girls managed to work together briefly to defeat the demon leader. Pixie even took pity on Regan when the X-Men turned their attention to the villainous illusionists, as she teleported her sisters away before they could be apprehended. [X-Men: Pixie Strikes Back #2-4]

Unfortunately for them, both sisters were apprehended at some point and put into prisons for their crimes. Whilst Martinique was sent to a regular prison for super-powered individuals, Regan was obviously deemed more of a threat, because she ended up on the Raft, a maximum security prison. Her salvation came in the form of Mystique, who had need of Regan’s powers and lethal attitude. Regan’s first act upon being released from her cell was to trap the guards in an illusion where they were being attacked by zombie super-heroes. Mystique had recently had an epiphany and realized mutants were in the same place they were many years before, so she may as well just make her own life comfortable instead. Regan joined her and, along with Sabretooth, 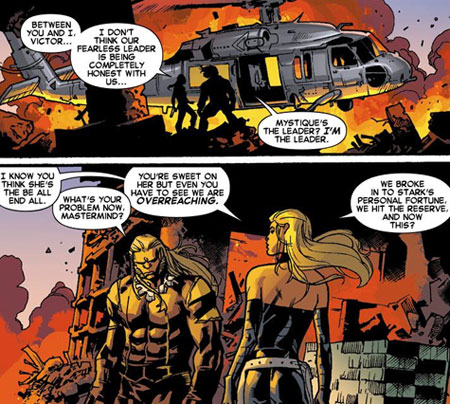 they set about stealing large amounts of money from various banks and businesses. Each had their own role in the raids. While Mystique was the infiltrator, Sabretooth would act as the muscle and Regan was used as a distraction. Upon Mystique’s order, Regan used illusions of the X-Men attacking the various locations to distract the civilians inside and to also implicate the X-Men in the thefts. Soon enough, though, Regan became suspicious of Mystique’s true motives and the fact that she always had to use the X-Men as antagonists.

Mystique’s endgame was soon revealed when she set a meeting up with Madame Hydra, the current ruler of Madripoor, and offered to buy the island. During the negotiations, though, the X-Men found the villains and stormed the warehouse they were using to store the money. 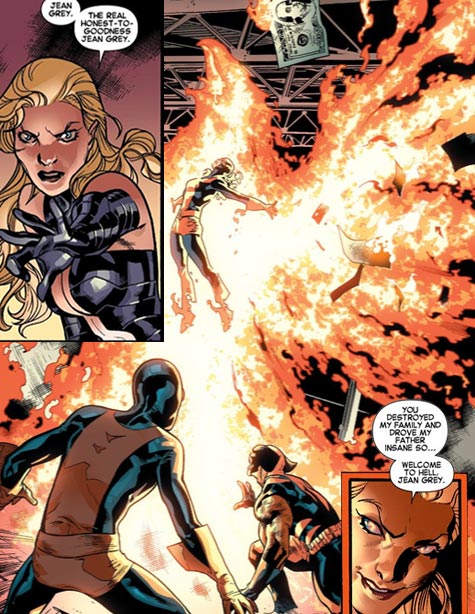 Regan was shocked to see Jean Grey amongst the X-Men and learned that the young girl had been brought from the past to the present. She saw an opportunity to take revenge on Jean, as it had been the actions of her older, future self that destroyed her family and drove her father insane. She created an illusion of her father Jason and caused Jean to think she had become the Phoenix again. She was edging Jean to use her powerful telekinetic blasts on her friends but Wolverine managed to snap the young girl out of it, much to Regan’s disappointment. Jean was angry at being manipulated and lashed out at Regan, knocking her down. When the tides turned against the villains, Regan tricked everyone into thinking the Avengers had arrived and she made her escape. Unfortunately for her, Kitty Pryde found her trying to fly a jet away and knocked her out cold. Whilst Mystique was put in prison, it would seem Regan gave the authorities the slip once more, as she was soon seen causing trouble again. [All-New X-Men (1st series) #9, 12-14]

Despite Regan’s apathetic attitude, at times she clearly wanted to become better at using her powers and strived to push herself to create even more realistic illusions. She just needed practice. To that end, when she saw Anole, one of the X-Men’s students, she realized she had found the perfect guinea-pig. Anole had skipped out on a first date with a guy because he was afraid that his reptilian appearance would scare him off. Regan latched onto this insecurity and trapped Anole in an illusion that preyed on his fears of rejection. She was having a wonderful time watching the boy succumb to his fears and it got better when a couple of X-Men turned up to help. She immediately trapped them in their own fear-based illusions and the trick worked, for a while at least. 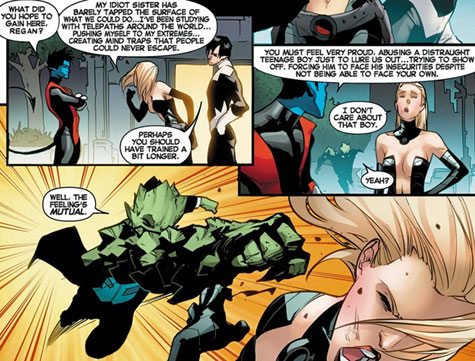 As he had faced his fears numerous times, Nightcrawler broke out of Regan’s illusion and forced Anole to do the same. Regan’s over-confidence worked against her once more when she allowed herself to get too close to the X-Men and she was knocked unconscious.  [Amazing X-Men (2nd series) #13]