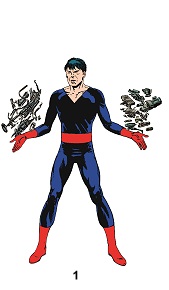 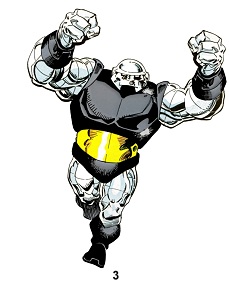 2) When Madison began hanging out with Alpha Flight, he would mostly wear a leather jacket with an Alpha Flight logo on top of a black long-sleeved shirt, leather gloves and a pair of jeans. [Alpha Flight (1st series) #30] Not needing any sort of costume while inside the Box armor, Madison even kept this semi-civil look after he became Box.

3) When Roger Bochs was going insane, Madison Jeffries phased inside the Box armor, forcing his friend out of it, so that he could harm no one. The Box armor was composed of a black torso with a yellow waist area, silver arms and legs and arms and a clunky head. [Alpha Flight (1st series) #46] 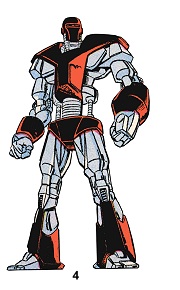 4) Shortly thereafter, Madison redesigned Box to better suit his own needs. The armor became much sleeker, with lots of hydraulic elements, as Madison was constantly altering the robot’s size and shape. Whereas arms, legs and the neck area were made of some grey metal, the head, torso, boots and gauntlets were all colored in a maroon shade. [Alpha Flight (1st series) #49]

5) Re-joining Alpha Flight without his Box suit, Madison wore a red and white body suit. Madison’s costume and those of several of his teammates features the outline of half a mapleleaf was featured on the left side of his torso. Additionally, several metallic panels were attached to the sleeves, the back and the legs of the suit, providing Madison with some metal to transmute in case there wasn’t any in close proximity. [Alpha Flight (2nd series) #1]

6) While brainwashed to join the criminal Zodiac as Gemini, Madison wore a grey and black costume covering his entire body. He also created a mechanical twin of himself wearing exactly the same outfit. The facemasks were of identical design too, with one being white and one black, both featuring the astrological symbol for Gemini – a Roman number 2 – on the forehead. [Alpha Flight (2nd series) #12]

-) Just as how Madison didn’t have a need for a special costume while serving the Director of the Weapon X program, he has been wearing nothing but civilian clothes while working among the X-Club, the X-Men’s science team.