In the form of a German noblewoman, the shapeshifting Mystique married Count Christian Wagner, but still made time for a series of affairs with other men in the castle and nearby town. One such lover actually touched her cold heart, the mysterious Azazel from La Isla des Demonas. After making love to the Countess Raven in a church hall, however, Azazel spurned Raven's proclamations of true love, and merely told her to raise their child, whom she was now pregnant with, as if it were the count's. A heartbroken Raven had no choice but to agree and, while Christian did become suspicious as to the baby's paternity, his sudden "accidental" death ensured no one else heard his suspicions. A few months later, she gave birth to a child, but the baby was born visibly mutated with blue fur all over, iridescent eyes and a prehensile tail. Due to the shock and the strain of the boy's difficult delivery, Mystique lost concentration and accidentally revealed her true form. Word spread of her and the baby's condition, and mother and son were chased by a torch-wielding mob. Trapped, Mystique morphed into one of the villagers and threw her own infant son over a waterfall to expedite her escape. [X-Men Unlimited #4 (1st series), Uncanny X-Men (1st series) #428] 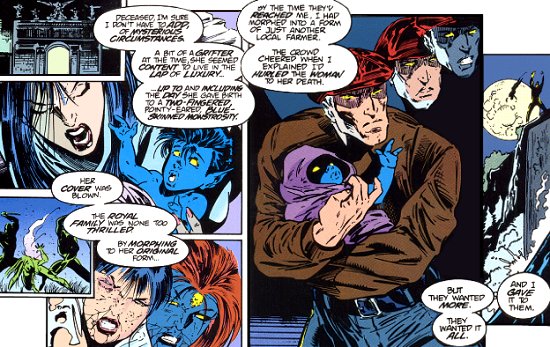 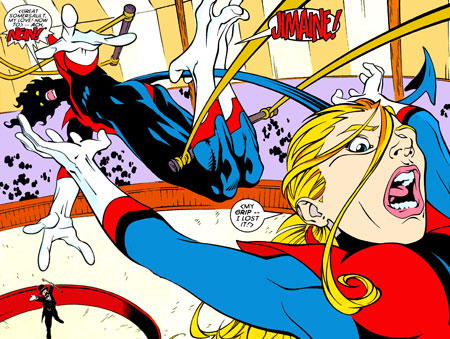 Miraculously, the baby survived and was saved by Margali Szardos, a powerful sorceress, who acted as a psychic at a local carnival. Kurt grew up with Margali and her two children, Stefan and Jimaine. As children, Kurt and Stefan played together often. Stefan knew that his magical heritage might lure him to evil, so he had his adopted brother promise him a blood-oath that if he ever killed without reason, Kurt would kill him as well. Reluctantly, Kurt agreed. In the carnival, Kurt grew up to be a trapeze artist, along with Jimaine, and the two of them forged a relationship as they grew older. [Excalibur #minus 1] 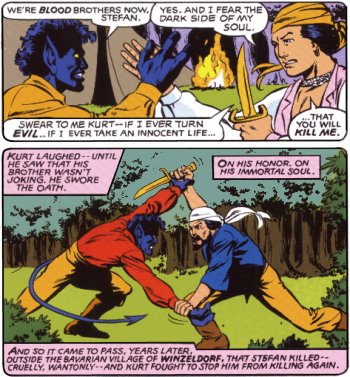 At some point during his childhood, Kurt developed a strong faith in God and the Catholic teachings. Years later, a new owner took over and wanted Kurt taken out of the trapeze act to be placed into the freak sideshow. Around the same time, Stefan's fears came true as he began killing people in a nearby town. Kurt attempted to stop his mad brother without using deadly force, but accidentally fulfilled his promise when Stefan used Kurt's tail to snap his own neck. Kurt was discovered at the murder scene by the townspeople and they believed him to be a demon and that he had been terrorizing the village. [Uncanny X-Men Annual (1st series) #4, Marvel Comics Presents (1st series) #103] 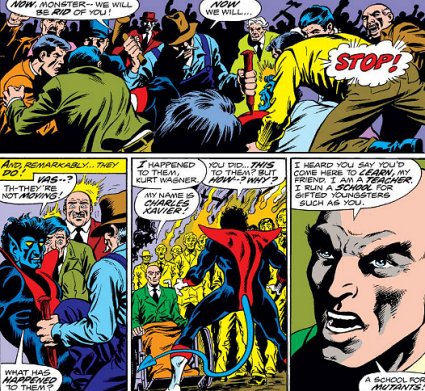 The mob chased Wagner through the streets of the village. Finally getting tired, Kurt was captured by them and they were prepared to drive a stake through his heart when the entire mob was psi-locked in place by Professor Charles Xavier. Returning to America together, Xavier asked Wagner to join his new team of X-Men to save the original team from Krakoa, the living island. Kurt joined the team as Nightcrawler, along with a number of other international mutants and Cyclops, the only member of the original team to escape. This new team succeeded in rescuing the X-Men from Krakoa. Afterwards, the original X-Men left to allow Xavier and Cyclops to train the new team. Nightcrawler chose to stay on with the X-Men because he felt that he had found kindred spirits, [Giant Size X-Men #1, X-Men (1st series) #94] but also because he had learned that his foster mother, Margali, cursed him for causing her son's death. 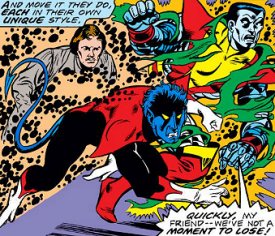 Xavier gave Nightcrawler an image inducer, which would hide his true appearance behind a holographic disguise. Kurt often used the device to mimic the features of his favorite swashbuckler, Errol Flynn. Still, he felt demeaned by having to hide himself from others. When teammate Wolverine accused Kurt of being ashamed of his true appearance, he accepted a dare to walk down the main street of Salem Center without the image inducer. Much to his surprise most people treated him very friendly, thinking him to be an actor or a pantomime. [Classic X-Men #4] Not before long, Kurt would eventually stop using the device altogether. Just as Wolverine was among the first to accept Nightcrawler, Nightcrawler was the first X-Man to truly accept Wolverine and not treat him like an animal. The two became close friends. [Uncanny X-Men (1st series) #524, Wolverine: Weapon X #16]

While celebrating his first Christmas with the X-Men, Kurt met an attractive stewardess named Amanda Sefton, and they often double-dated with Colossus and Amanda's friend, Betsy. [X-Men (1st series) #98] 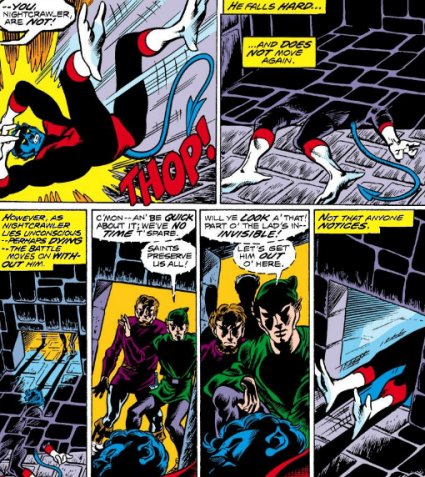 When the X-Men went to Ireland to fight Black Tom and the Juggernaut at Cassidy Keep, yet another mutant ability of Nightcrawler was discovered. When Kurt was knocked unconscious, he fell down in a dark corner and his body blended in with the shadows. Nightcrawler was found by the leprechauns living in the castle and, when he regained consciousness, they told him about the strange effect. Up till then, Kurt did not know of this camouflage ability. [X-Men (1st series) #102-103]