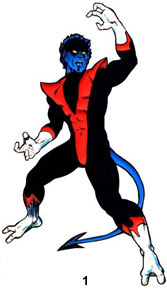 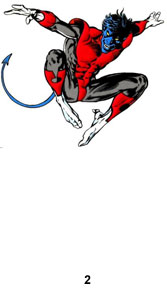 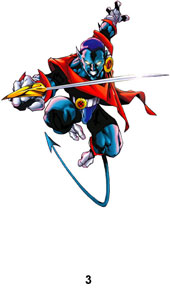 1) Kurt's first costume is the outfit he wore as a trapeze artist in the circus. Probably, it was replaced with a similar outfit made of unstable molecules after he joined the X-Men. [Giant Size X-Men #1] Nightcrawler wore this suit for years and several times returned to this look.

2) While he was a guest of Cloud Nine, Kurt's costume was damaged. One of the Warpies, by the name of Silkworm, designed a new one for him. It was very close to the original one but also had some new elements, mainly that it lacked the open V-cut in the front. [Excalibur (1st series) #63]

-) Apparently, Kurt was more comfortable with his classic look, which is why he returned to it only a short time later. [Excalibur (1st series) #70]

3) A few weeks later, Kurt decided for a much more abrupt change. He grew a goatie, had a new haircut and his new outfit went along with his love for swashbuckling and pirate movies. [Excalibur (1st series) #96, 98]

-) When Excalibur disbanded and Nightcrawler returned to the X-Men, he again wore the classic outfit from the days while he was a mainstay of the team. [Uncanny X-Men (1st series) #360] 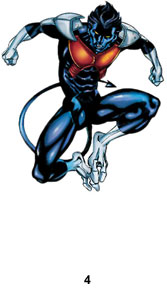 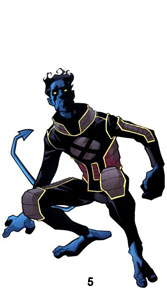 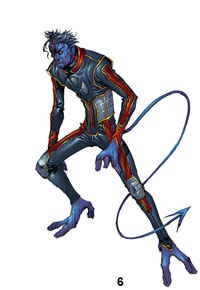 4) In the following months, Nightcrawler decided to become a priest in training and help out the X-Men only in emergency situations. In his absence, the mutants had adopted some sort of team look. Each costume had a big X across the chest area and Nightcrawler's had shoulder pads similar to Colossus'. Otherwise, the suits were still individual and came in different colors. [X-Men (2nd series) #104-105] Kurt's uniform had two versions in different color schemes. The one presented her has a red X on a blue bodysuit. The other version was dark red with a white X on it.

5) When Kurt fully rejoined, the X-Men no longer were wearing bright costumes, but using some leather outfits that almost look like street clothes. The members had a vast supply of different shirts, coats and jackets from which to pick. [Uncanny X-Men (1st series) #395]

6) When some of the team members returned to more individual looks, Nightcrawler also changed his uniform. Though the new design still went along with the practical leather clothes theme, it included some silver and red elements. [Uncanny X-Men (1st series) #415] 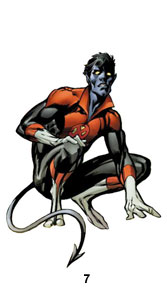 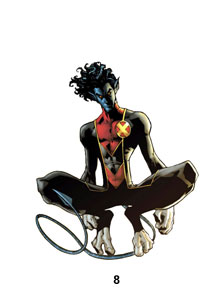 7) Upon joining Storm's X.S.E., Nightcrawler switched his costume to variation on the Cloud Nine uniform designed for him while he was in Excalibur. The solid leotard portion was more blue than black he had a red-and-yellow 'X' emblazoned on his chest. Streamlining the original a bit, this costume's shoulders didn't flare outward, like his old ones, opting instead for a more tapered look. This outfit also featured an open collar, although Kurt often wore a variant of it that had no collar and instead was fitted to his neck. [Uncanny X-Men (1st series) #444]

8) Nightcrawler's final costume retained the elements of his original uniform but added a few stylized updates. The red portion of the costume was more centered on his chest and torso and ceased at his lower stomach area, and had no flaring shoulders. This new uniform also boasted a downward-pointing black chevron across his chest and back, and a gold-and-red "X" symbol added across his heart. [Uncanny X-Men (1st series) #500]

-) Upon his resurrection, Nightcrawler reverted to wearing the trapeze-artist costume he wore when he first joined the X-Men.