In the Age of Apocalypse, Northstar and Aurora were part of Sinister’s Elite Mutant Force (E.M.F.) and, as such, were assigned to patrolling the breeding pens. The siblings were rather 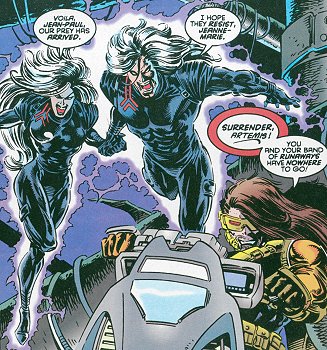 snotty about their superior status as mutants and seemed to take great pleasure in punishing those prisoners who acted up or tried to escape. When the E.M.F.’s leader, Cyclops, switched sides, secretly helping some inmates to escape, he was caught in the act by the speeding twins. Still, the one-eyed Summers managed to take both Northstar and Aurora out before they could report him. In fact, he rendered the twins comatose, keeping his betrayal secret for the time being. The twins were cast into the role of outlaws when Apocalypse's rule ended and a democratic system was re-installed. Magneto and his X-Men promised to hunt down all mutants that had worked for Apocalypse, and eventually Weapon X and X-23 found and killed the speedster twins.

Alpha Flight first met the X-Men when they fought over Wolverine. In the timeline depicted in What if (2nd series) #59, Logan remained with Alpha Flight to save his friends. The X-Men weren’t willing to let him go and turned back to Canada to rescue him. They were intercepted by 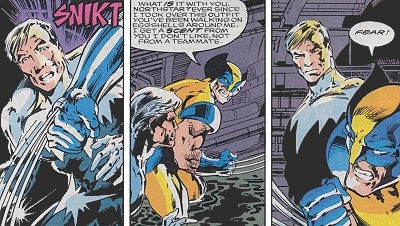 the Canadian Air Force, which sent an emergency message to Department H, asking for Alpha Flight’s assistance. Unfortunately, the message never made it to James Hudson or Logan, as Northstar, who was on monitor duty, had deleted it following one of his arrogant hunches. As nobody answered their call, the military had no other choice but to blast the X-Men’s jet out of the sky, killing everybody aboard. His friends all dead, Logan remained with Alpha Flight and became their leader, with Northstar constantly trying to cover his guilt from him. When the secret was spoiled by a villain, Logan still found it within himself to forgive Jean-Paul. Not only did he realize that he had grown much more as Alpha Flight’s leader than he would have among the X-Men, but also he found that in honor of his dead friends it was important to keep Xavier’s dream alive. 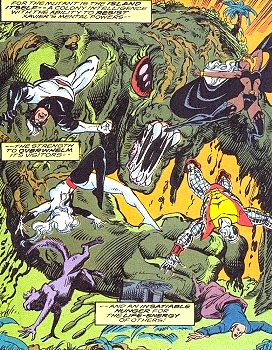 In yet another reality, shown in What if (2nd series) #60, Jean-Paul never joined Alpha Flight. The original X-Men having disbanded much earlier, due to Scott and Jean getting married, Xavier had too look for new mutants and recruited both Northstar and Aurora before they would have been contacted by Alpha Flight. Along with them were also Storm, Colossus and Catseye. As this team was still somewhat inexperienced, Xavier accompanied them when he picked up a powerful signal from the mutant island, Krakoa. The entire group was defeated within minutes and, as Xavier was among the captured people, nobody realized the X-Men’s disappearance until it was too late. By the time the Avengers were alerted to the danger of Krakoa and had defeated it, the new X-Men’s bodies had already been drained of all their energies.

In the Ultimate universe, Jean-Paul was the son of the Canadian ambassador. Life wasn’t easy for him, though. First, he had to deal with other kids insulting and beating him due to his coming out, then he was thrown off the track team, as he was believed to have taken steroids - when his 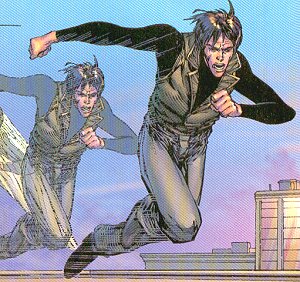 speed was actually just a sign of his new mutation. When the X-Men invited Jean-Paul to join their school, he was not only disgusted by the thought of being a mutant but also refused to live in segregation. However, the same evening Jean-Paul was almost killed by Mr. Sinister, a serial killer chasing young mutants. Only his phenomenal reflexes saved him. Instead of joining Xavier’s school, Jean-Paul enrolled in the Academy of Tomorrow, forming friendships with Havok, Polaris, Sunspot, Cannonball and Doug Ramsey. After an encounter with the X-Men, Jean-Paul, now dubbed "Northstar" asked Colossus to attend the Homecoming Dance, which Colossus accepted, and the two began dating. They seem to be getting on really well, and following Xavier's apparent death, Northstar was delighted when Colossus transferred to the Academy of Tomorrow as well.

Eventually, Northstar was targeted by his sister Aurora and Alpha Flight, an internationally sanctioned mutant force. They kidnapped Jean-Paul and subjected him to Banshee, a drug designed to augment mutant abilities. The procedure went wrong and Jean-Paul began shaking uncontrollably. He seemingly died in Colossus's arms as Piotr came to rescue him. Ultimately, Northstar was alive, but left powerless and paralyzed from the waist down due to Banshee. It's unknown if he was at the Academy of Tomorrow when Magneto's Ultimatum attack slaughtered everyone at the school. 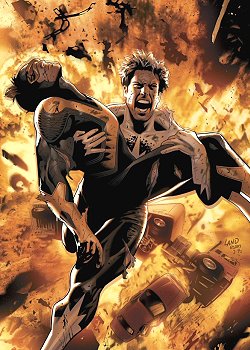 Ten to fifteen years in the future, the X-Men met their End when several of their deadliest foes banded together and attacked them simultaneously on various fronts. Northstar was present at Xavier’s school when the villains attacked. With his incredible speed, Jean-Paul rescued many of the students in time before the villains blew up the anti-matter fusion generator in the basement, leaving nothing of the mansion or the estate but a huge crater. The last person Northstar got out was Cyclops, and he shielded the X-Men’s leader from the brunt of the explosion with his own body.

Shortly thereafter, Jean-Paul succumbed to the injuries he received. Upon entering the afterlife, he was welcomed by spiritual images of his erstwhile teammates from Alpha Flight.

In the altered reality of the House of M, Northstar was also teaching young mutants, in fact some of them were even the counterparts of his class at 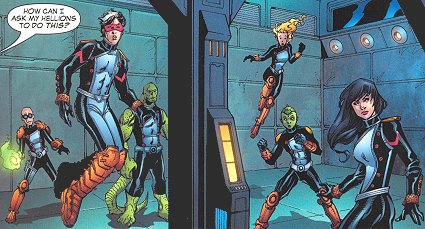 Xavier’s in the main reality. However, they were being trained for an entirely different purpose. Just like his colleague, Danielle Moonstar, Northstar was an agent of S.H.I.E.L.D, supervising the agency’s junior training squad program. A large number of S.H.I.E.L.D.’s agents being mutants or other super-humans, they supported Magneto’s rule of mutant supremacy.

In the Age of X reality fabricated by Legion, Northstar was one of the dozens of mutants who 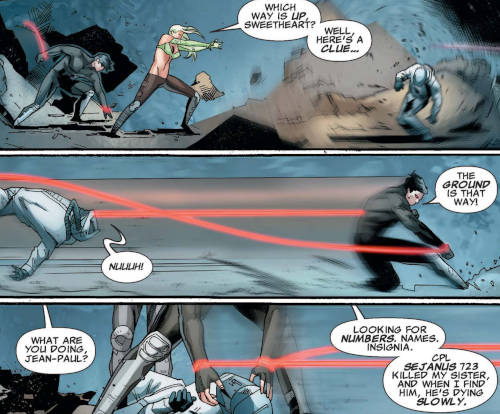 made their last stand at Fortress X. Jean-Paul wore a modified costume in this reality with red lights on his wrists, causing him to leave trails of color in his wake as he sped by. His sister Aurora had been killed at some point in the past of that reality, and he had a long memory and a grudge toward the soldier responsible.