The life of Jean-Paul Beaubier started with a tragedy, as soon after his and his sister Jeanne-Marie’s birth, their parents were killed in an accident. The twins were brought to their mother’s cousins, the Martins, but they could not afford to adopt both children, so they arranged for Jeanne-Marie to be raised in a girls school, which was government subsidized. Shortly 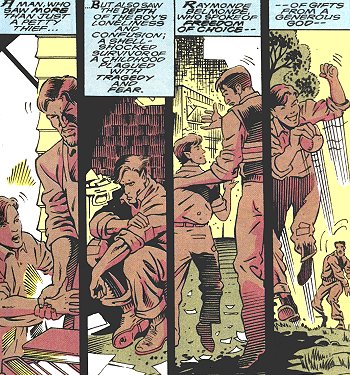 afterwards, the Martins moved to northern Quebec because the father, who was with the RCMP,  had been posted there. By the time Jean-Paul was six years old, history repeated itself, as the Martins too died in an accident. The boy was brought to a foster home and the twins grew up unaware of each other. [Alpha Flight (1st series) #10 backstory]

When Jean-Paul was in his early teens, he was caught shop-lifting by Raymonde Belmonde. The kind man saw more than just a petty thief and realized the boy‘s loneliness and confusion. Belmonde spoke to Jean-Paul about freedom of choice and helped him understand and accept who and what he was - a mutant and gay. Without ever asking for anything in return, Raymonde made it his business to see that Jean-Paul steered right and also took him skiing, which he used as a means to learn to control his growing power of super-speed. [Northstar #1, Alpha Flight (1st series) #8] 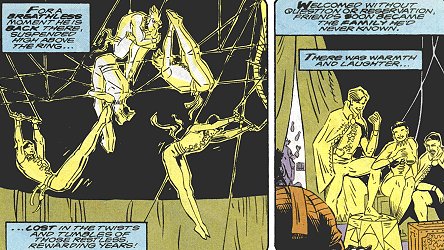 In the next few months, Jean-Paul joined a circus, where he worked as a trapeze artist. He was welcomed without question or reservation and, soon, the newly-made friends became the family he had never known. However, beneath the surface there was also a lot of anger in Jean-Paul, built up in the many years of frustration. 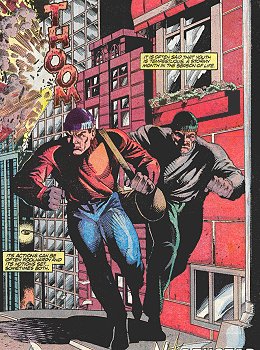 Jean-Paul finally found a way to express this anger when he joined the Front de Liberation du Quebec (FLQ), a separatist movement that petitioned for recognition of Quebec as a sovereign nation through loud protests and acts of terrorism. Soon, Jean-Paul became part of a radical underground group of the FLQ called Cell Combattre. Northstar acted as special courier, carrying their communiqués too swiftly to allow detection or interception. Yet once Jean-Paul realized that Cell Combattre did not even stop when it came to murder, he severed all ties with them. [Northstar #3, Marvel Fanfare (1st series) #28]

Jean-Paul decided to become a professional skier and, by cheating a little with his superpowers of speed and flight, he quickly rose to fame, as he won Olympic gold medals and other championships. By that time, Jeanne-Marie had already been recruited by Department H and, seeing a picture of Jean-Paul in the newspaper, James MacDonald Hudson, Alpha Flight's founder, recognized the uncanny 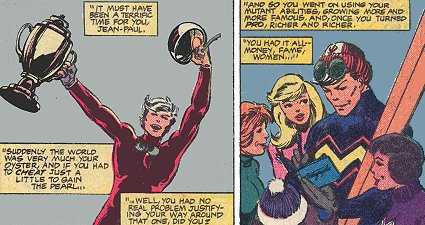 resemblance. Closer examination of their birth and adoption records revealed their history and Department H invited Jean-Paul Martin to to meet with them. Learning his history, Jean-Paul almost immediately changed his last name into what it originally had been and soon found himself arriving at Parliament Hill. At first, Jean-Paul had no intention of working for the government, but this changed when he was introduced to his twin sister. Shaking hands, the siblings discovered that they possessed one more ability - to generate a brilliant dazzling light upon physical contact. [Alpha Flight (1st series) #10]

Jean-Paul confided in Hudson of his terrorist activities in the past but, as he had severed all ties to the FLQ, Hudson decided to keep it secret. Using the codenames Aurora and Northstar, the siblings entered Department H’s Flight program, where they met other potential recruits for Canada’s own super-hero team. One year later, Alpha Flight was ready for their first mission which, ironically, was to hunt down one of their own - Wolverine, a recruit of Department H who had defected and joined the American X-Men instead. Alpha Flight did hold their ground in this first battle, but they caused significant destruction in Calgary. Although they managed to capture Logan, he quickly escaped again. Ultimately, the government decided to finally let Weapon X go, as they were beginning to fear that they couldn't afford an official super-hero team and the damages caused by their battles. [Alpha Flight (1st series) #7, X-Men (1st series) #120-121]

Indeed, only a few weeks later, Department H was closed and their operatives had to go back to their former lives. When Northstar visited Jeanne-Marie in the school in which she had been raised and was now working as a teacher, he found his sister almost a complete stranger. The usually free-spirited Aurora was very reserved and shy, her beautiful features hidden behind a pair of glasses and some prissy clothes. His sister had a dissociative personality and Alpha Flight had given her the strength to maintain the light Aurora mood, which was actually hated and feared by the “Jeanne-Marie“ persona. Northstar managed to snap her back into Aurora and, together, they answered a call from the Hudsons, who wanted to keep Alpha Flight running even without governmental funding. [Alpha Flight (1st series) #1]

In the following weeks, Aurora kept switching personalities more often, even in the heat of battle, much to the concern of her lover Walter Langkowski, aka Sasquatch, and her brother, who did not approve of that relationship. Finally, Jean-Paul took her to a psychiatrist, but the break between her personalities was so total that the doctor could not detect it after his first meeting with “Jeanne-Marie". Northstar wondered how he could make the psychiatrist realize his sister’s condition without telling him their secret identities, which were linked to Aurora's personality changes. Further, the doctor warned that, even if he diagnosed her with dissociative identity disorder, he could not simply cure Jeanne-Marie and erase one identity. An attempt would probably form a third persona, unlike either of the other two. Northstar thanked him and decided to think about it.

Since they already happened to be in the neighborhood, Northstar took his sister to meet Raymonde Belmonde. Shortly thereafter, an attack of a purse-snatcher once more triggered her transformation into Aurora. Jean-Paul’s old friend introduced them to his daughter Danielle, whose existence had only recently been revealed to him. Suddenly, the friendly reunion was interrupted by a criminal called Ernest St. Ives. As Raymonde had refused to sell his café, the gangster brutally killed him and intended to kidnap Danielle to force her to sell the building to him. Yet, as he had never seen the woman before, he accidentally kidnapped Aurora instead. [Alpha Flight (1st series) #7]

Northstar managed to track them down and was joined by a strange heroine called Nemesis. Together, they battled their way to St. Ives and found Aurora unharmed, sitting on his desk. After Nemesis had effectively dealt with the villain, Aurora revealed that Danielle had been his silent partner in the murder of Raymonde, which also explained why he had not harmed Aurora, as he thought her to be Danielle. Northstar was relieved. He admitted that he had suspected that his sister had romanced herself to safety, much to Aurora’s shock. Outraged, she ended their partnership and never wanted to see her brother again. [Alpha Flight (1st series) #8]