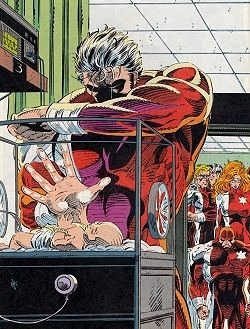 While the team was battling Mr. Hyde in downtown Toronto, Northstar heard a sound from a nearby alley. He did a quick search and indeed found his suspicion to be true - an abandoned baby was lying in one of the rubbish bins. He immediately left the battle to take the little girl to the next emergency room, where she was closely examined. Unfortunately, the doctors diagnosed that the little infant had been infected with AIDS while still in the womb. Jean-Paul adopted the baby, naming her Joanne Beaubier, and Alpha Flight did various publicity stunts to remind everyone of AIDS and of the importance to talk about it. Weeks later, little Joanne died in Northstar’s arms. The next day, Northstar held a press conference, during which he announced his homosexuality, hoping that his status as a celebrity and role-model would increase the media’s interest in the topic of HIV information and prevention. [Alpha Flight (1st series) #106]

Several weeks later, Canada’s parliament was considering a super-powers bill, very similar to the Mutant Registration Act of the United States. The strongest supporter of this movement was a politician named Robert Hagon, who did his best to make Alpha Flight look bad in the public eye. Soon, Canada faced its own wave of anti-mutant/super-hero hysteria and Department H decided 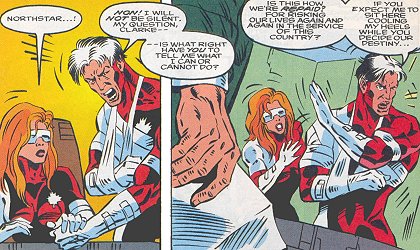 to shut down the Flight programs and lay low for a while. While most other members quietly accepted this decision, Northstar was outraged and refused to accept the “offered” terms - the Alpha Flight members were limited to advisory roles and still bound by the Official Secrets Act. Jean-Paul stated that this was no way to repay them for the many times they risked their lives in the line of duty. After all, beneath his costume he was a free man that neither words nor government could control. He angrily departed. [Alpha Flight (1st series) #120, 130]

Following Alpha Flight’s disbanding, Northstar was stalked by several reporters who were interested in his activities. One of them kept asking about the Quebec City Bus station bombing, an incident that happened during his days with the FLQ, but Jean-Paul avoided answering. Later that day, this reporter was found killed and evidence seemed to point towards Northstar. Therefore, Canada’s government assigned Weapon P.R.I.M.E. to bring him in. About the same time, Jean-Paul discovered that some of his closest friends had been targeted by Arcade. For about 24 hours, Northstar was kept busy, flying to Paris and Russia, disarming several bombs and rescuing his friends, as well as battling Weapon P.R.I.M.E. When he finally got to Arcade, the owner of Murderworld claimed that he had been hired for the job and told Northstar the address where he would find the mastermind behind it all. Too exhausted to fly or use his speed, Jean-Paul had to rent a car to get to Vancouver, wondering which of Alpha Flight’s many villains was behind this scheme. To his surprise, it was a businessman named Carl Kerridge, a man who Northstar did not know. Kerridge in turn had made it his business to know everything about him.

Wanting to cleanse society of any abnormities, he had chosen to terminate Northstar for making a stand. As a gay man and a mutant, Jean-Paul seemed the perfect target. Stating that Arcade’s purpose was to tire him, Kerridge then started to fight Jean-Paul, intending to kill him. He also kept reminding him of the victims of the Quebec incident, trying to break Northstar’s fighting spirit, though this proved to be a mistake. When, years ago, the FLQ planted the bomb at the bus station, they were unaware of one of the buses returning late. Its passengers would have died, though Northstar saved them in time. Still, the news reported of several people having died, as the government was eager to turn the incident into propaganda material. Thus, Kerridge actually reminded Jean-Paul of an hour of heroism and he managed to defeat him. In the villa, Jean-Paul found enough evidence that linked Kerridge with the murder of the reporter and he was put into custody. [Northstar #1-4]

Alpha Flight’s disbanding also took its toll on Aurora. At first, she entered a happy relationship with her teammate, Wildheart, but when he mutated back into his feral, ugly incarnation, he abandoned her, fearing the effects it would have on Aurora to see her lover in this state. Yet this was exactly the worst he could do to her. For a time, she blamed herself for his departure and then she swore that if she could not have him, then nobody else should. Going over the edge, Aurora hunted Kyle down (who, by then, had joined the American-based X-Factor) and was eager to kill him. Northstar and Puck went after her and brought her back to Department H, where they arranged some psychological treatment for her. [X-Factor (1st series) #116] Yet, they too had no proper means to treat her and, on top of it all, she was abducted by the Brotherhood. Later, Havok released her when he destroyed the Brotherhood from within and Aurora disappeared.

Northstar went searching for his sister all around the globe and, strangely, he found himself drawn to the school where she had been raised. Although the building was in ruins after being destroyed by a fire, Aurora really was inside, more lunatic than ever, as she seemed to be teaching a class 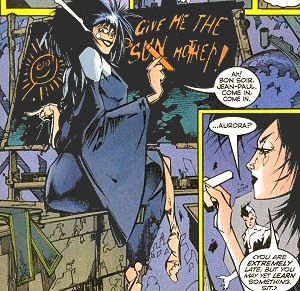 of non-existing children. Sitting in the classroom, Jean-Paul fell asleep and, when he finally came around, Aurora was gone again, though she left a message on the board: “Help Me“. Next, he tracked her down to the North Pole, where she again eluded him.[Alpha Flight (2nd series) #12-13, 15]

Finally, he found some help in Sasquatch, Shaman and the original Guardian. Not only could they temporarily stabilize Jeanne-Marie’s mind, but also they found the reason for her odd behavior. The confused woman had gone to the recently re-opened Department H for help but, instead of giving her any treatment, she, like Diamond Lil, was infected with some new bacteria to determine its effects on superhumans. In Aurora’s case, it was “eating away” every layer of her many personalities and was about to reach the core of her mind. The original team confronted the new Alpha Flight and, once the Department’s secret experiments were exposed, the bacteria’s effects were reversed. In the wake of these discoveries, the original team were given back official status. [Alpha Flight (2nd series) #17-20, Wolverine (2nd series) #142]

However, Jean-Paul only remained a short time with the team. Believing his sister in safe hands among their teammates, he soon left to make further use of his status as a gay celebrity.  Northstar wrote a book entitled “Born Normal” and, during its promotion tour, he was approached

by Jean Grey, who asked him to join an interim team of X-Men. Magneto was about to start a third world war, but most of the X-Men were unavailable to deal with this crisis. Northstar only reluctantly accepted and the fact that Paulie Provenzano, another member of this makeshift group, was a strict homophobe did not make this decision easier. Once Magneto had been stopped and the crisis had passed, the members of Jean’s emergency group departed to pick up their former lives. [Eve of Destruction crossover]

Back in Montreal, Quebec, Jean-Paul concentrated more on building himself a life outside of the world of mutants and heroes and established himself as a successful businessman. However, not before long, he was contacted by Professor Charles Xavier, who, with more and more students being accepted into his school, asked him to take a position at his Institute. Beaubier declined, having no interest in further proposing mutant rights, but the professor corrected him in this wrong assumption. He deliberately asked him because of him being gay. Mutants, Xavier told him, are 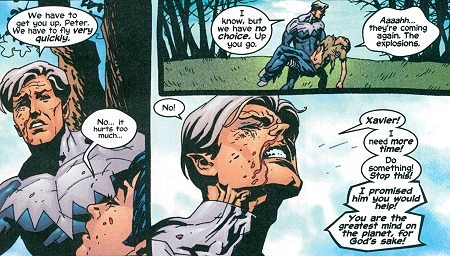 not the only minority in the world and his students need role models. Xavier repeated his offer that Jean-Paul could teach business and economy at the Institute and the Canadian promised to give it some serious thought. As a sign of good will, he also agreed on helping the X-Men in investigating an incredibly powerful new mutant signature near Fort Albany. It turned out that it was a young mutant who had just manifested a very destructive power, which periodically released itself in devastating explosions. The boy had no control over this and Northstar tried to fly him to Avengers Mansion, which had a special chamber prepared for the child. Unfortunately, despite his speed, Jean-Paul was not fast enough as, during the flight, several explosions occurred, injuring both the boy and Northstar. Although it meant placing his own life at risk, Northstar stuck with the boy to the very end. After a final explosion killed the young mutant, Jean-Paul was taken to the mansion’s infirmary, where he accepted Xavier’s offer. [Uncanny X-Men (1st series) #414] 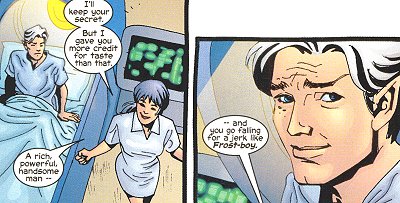 While recovering from the wounds he received, Northstar befriended school nurse Annie Ghazikhanian, who was the first to discover that he suffered from the same problem as her; they both loved a man who didn’t respond. While for Annie it was the comatose Havok, Northstar was attracted to his teammate, Iceman, though as he was sure that Bobby was heterosexual, he urged Annie not to tell anyone. [Uncanny X-Men (1st series) #415] 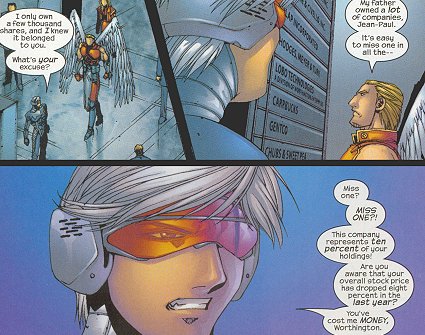 Before long, the X-Men found themselves pitted against the operatives of a company called Lobo Enterprises - a subdivision of Worthington Industries, though Archangel never knew about it. Northstar was majorly annoyed by this; while he only owned a few shares of Worthington’s Industries, he was still better informed about it than the big man himself. He reminded Warren of the duties that come along with inheriting such a big company. [Uncanny X-Men (1st series) #417]