In the next weeks, Northstar developed a nasty cough and even minor wounds received in battle took very long to heal. His condition took a turn for the worse when the team encountered 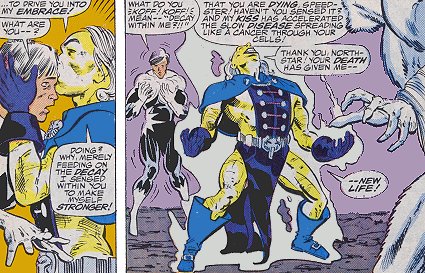 an ancient sorcerer by the name of Pestilence. Sensing an already existing decay within Northstar’s body, Pestilence kissed him to feed on this disease and make himself stronger. When Northstar asked what he was talking about, the villain explained that Northstar was dying and that he had accelerated the slow disease spreading like a cancer through his cells. [Alpha Flight (1st series) #44]

Indeed, Northstar‘s health deteriorated, but the resurrection of Walter Langkowski provided some 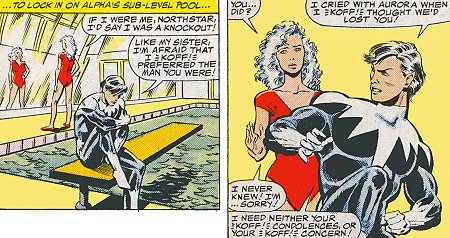 distraction. His soul having taken over the white Sasquatch body of the recently deceased Snowbird, Langkowski now found himself trapped in a woman’s body. While getting to know “Wanda“ Langkowski, Northstar admitted that, like his sister, he preferred the man he was and that he cried when Alpha Flight thought they had lost him. Sasquatch was startled by that revelation, but Northstar brushed it off. Feeling the effects of his disease, he wanted to be alone to think about the life he led. [Alpha Flight (1st series) #46, 48]

At the same time, Aurora’s mind became more and more unbalanced. Her flirtation with Roger Bochs caused him to undergo a risky operation to regain his legs, which cost him his sanity and ultimately his life. She also developed an unreasonable fear of the dark and her personalities fractured. Remembering the fire-fountain of the magical Viking village, Alpha Flight ventured north, hoping to find some way to cure both of the twins. Finding a rose, blooming out of frozen 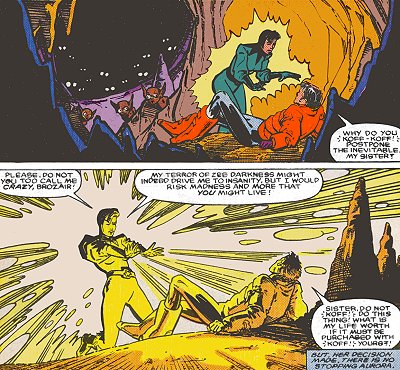 Tundra, they knew that some of the magic still had to be there. The team reached the cavern of the fire-fountain, but the energy was no longer there. Instead, they found a doorway at the bottom of the pit and, thinking that the magical energy might have come from there, they opened it and entered a maze of dark tunnels. Northstar suddenly started to burn with a fever and the others had to carry him. As this slowed the team down, Aurora opted to stay at his side and tend to his needs, while the rest of the team moved on to search for the magical cure. Soon, Loki revealed his presence to the twins and told them of their true heritage. According to Loki, Jean-Paul and Jeanne-Marie were actually half-elves, born to a human father and an elf mother, who had abandoned her people. Yet the other members of her race hunted her down and actually caused the car accident in which the couple got killed. Their status as half-elves explained the twins powers of speed and light, as well as their pointed ears. Yet Loki also said that the pure elf blood in their veins could not survive for long on the impure Earth. In Northstar’s case, this resulted in physical illness, while Aurora was affected mentally. Only the pure light of Alfheim could cure them, but the team had chosen a wrong gateway, sending them to a dark netherworld. With these words, Loki left the siblings to their fate. Jeanne-Marie tried to hold back the attacking demons for as long as she could, until she had an idea. As an infusion of pure light was the cure, she willingly expended all her power to bathe Northstar in white brilliance. Indeed, Northstar’s health was restored, though the powerless Jeanne-Marie was dragged away by demons.

Elsewhere in the maze, the rest of the team had run into other demons and the only way to save themselves was to retreat. Along the way, they picked up Northstar and, once they had escaped, Vindicator fused the gate shut so that none of the demons could make it to Earth. However, it was also the end for Aurora and Puck, who were still trapped in the netherworld. Once the team was back on the surface in the Arctic wasteland, Northstar stated that Loki indeed was a trickster. They had come to cure two Alphans and lost three. The others wondered who the third might be, as he started to glow and then departed into the sky. There, a gate opened and two elves

welcomed Jean-Paul to Asgard. From afar, Loki watched in amusement, but he suddenly was summoned to the higher gods, who demanded an explanation for his behavior. Loki claimed to have had good intentions and, to prove his seriousness, he transported Puck to Tibet and Aurora, now a mere mortal without powers, was transported to a monastery. Still, the gods sensed mischief from Loki and, as punishment, he was sent to the netherrealm, preventing him from fulfilling whatever plans he might have had for Northstar. [Alpha Flight (1st series) #50]

Already upon arriving in Alfheim, the region of Asgard that the elves call their home, Northstar realized that Loki had been lying. When he told the elves of his supposed heritage, they laughed 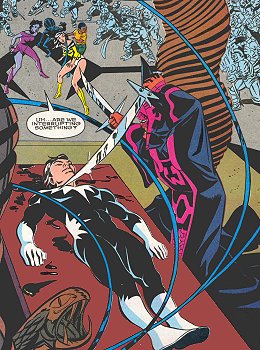 at Northstar for believing Loki’s fairy tale. Jean-Paul was now stranded in Asgard and had no way to get back to Earth or contact his teammates. He spent many months in the realm of the Norse gods, until he was captured by a group of trolls, who intended to sacrifice him to their god and eat his flesh. Before they could perform the rite, Northstar was rescued by a some reserve members of Alpha Flight, including his still-powerless sister. As Alpha Flight was about to battle Llan the Sorcerer, Talisman had decided that they needed every available member, so she had sent Jeanne-Marie, Purple Girl, Pathway and Goblyn to Asgard. Once they had effectively dealt with the trolls, they took Northstar and teleported back home. [Alpha Flight (1st series) #81-82]

Talisman was right with her prediction. When Llan’s forces invaded Earth, the odds were overwhelming. Not only Alpha Flight and its trainees, but also the newly-formed Gamma Flight entered the battle. Aurora, too, accompanied them, despite her powerlessness, for she claimed that, like every other Alphan, she was trained in hand-to-hand combat. Yet, against demons twice her size and much stronger than her, fighting techniques were pretty useless and, soon, Jeanne-Marie was about to end up as “fresh meat.” Northstar immediately rushed to her side and protected her. He then got an idea, since she had sacrificed all

her power to him, maybe he could give some of that back to her and, surprisingly, it worked. Her powers were fully restored and, touching each other, brother and sister again created their brilliant light effect. The demons feared this living light, providing Talisman with some extra time battling Llan. She told the speedsters to enlist Dr. Strange's help and, with his magical powers added to her own, the demonic invasion was finally prevented. [Alpha Flight (1st series) #84-86]

The interaction between the twins' powers remained unstable. After the initial power transfer, Aurora's powers continued to evolve with new forms of light manipulation while Northstar focused on his speed, rarely if ever demonstrating light powers in this period. Following the incident with Llan the Sorcerer, Department H had about twenty potential members for a revamped Flight program and it took some time to figure out who of the assembled heroes should be assigned to which fields of work. Northstar ended up as a full active member of the main team, while Aurora preferred to be part of the reserve team, Beta Flight, and work with the psychiatric counseling unit for Alpha Flight’s incarcerated prisoners. [Alpha Flight (1st series) #95]

Somewhat later, Canada became the center of attention of an alien group called the Consortium, who were looking for the woman known only as Her. It took the combined might of Alpha Flight and the Avengers to deal with the invading forces. Meanwhile, another incident happened within Alpha Flight’s headquarters. Awaking from a coma she had been in for weeks, Pathway panicked and teleported everyone in the room away, including her parents, Persuasion, Shaman and (as it seemed) Aurora, who all had been watching over the young girl. As Pathway had teleported across 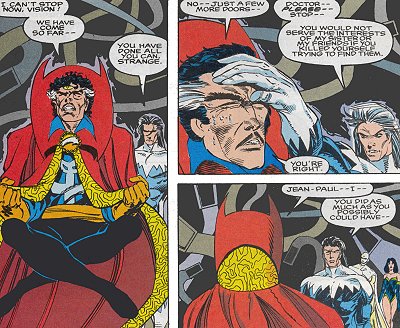 dimensions before, the group could have ended up literally anywhere. As soon as the alien attack was prevented, Northstar went to Dr. Strange for help. Accompanied by Sersi and the Vision of the Avengers, they traveled to the Crossroads of Time and started searching, opening doors to each and every reality. However, soon creatures came through these doors that Strange had to leave open, or the group would never have found their way back. It was Northstar who decided to call off the search, for it was too dangerous. The search team could have been killed and the attackers would have been free to invade dimension after dimension. Jean-Paul thanked the magician for his effort and returned to Canada. After all these months, he had to accept that he lost his sister once more. [Alpha Flight (1st series) #97-101]

Little did he know that Aurora was closer than anyone thought. She had not been teleported away with the others, but actually left the room at super-speed a few split-seconds before, to join the battle outside. Yet, passing along the psychiatric detention facility, the psi-sensitive Aurora was manipulated by one of the prisoners, Headlok, who made her enter his cell. Unnoticed by the staff, he kept her hidden for weeks and enjoyed torturing her by shattering her merged psyche into many split personalities - the happy-go-lucky Aurora, the nun, the healer, the scared girl and the heartbreaker were all playthings for Headlok. Returning from one of the team’s many 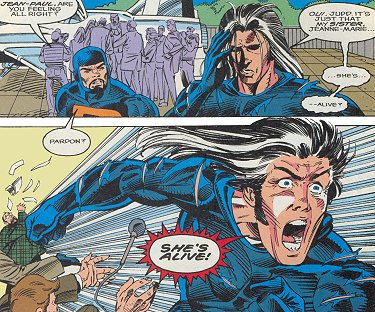 missions, Northstar sensed his sister’s pain and rushed to the cell block, but he did not know how to deal with the villain without causing Aurora further harm. It transpired that she needed no help. Headlok made the same error, like many before him, thinking her dissociative identity disorder was her weakness. However, Aurora could also draw strength from numbers. From the farthest recess of her mind, the cold, stiff “Jeanne-Marie“ personality resurfaced and she accomplished alone what before had taken the combined effort of Alpha Flight and the Fantastic Four. She defeated Headlok by causing her cleansing light to erupt from within the villain’s body. Deeper examinations revealed that Aurora’s mind had now returned to its original spilt-personality, though the two personalities now both could wield the body’s mutant powers and jointly took one of the empty spots on the team’s active roster, left open because of Box and Diamond Lil’s getting married. Although Northstar was not sure of this decision, he was happy to have his sister back - both of her. [Alpha Flight (1st series) #104]