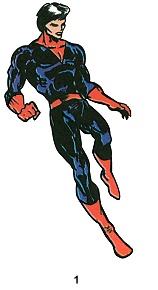 2) This is the first actual costume of Northstar. His twin sister Aurora had a similar costume, though her star was on her left hip. When standing next to each other, the stars on the twins‘ hips connected into one image - a symbol of their shared power to generate brilliant light. [X-Men (1st series) #121]

3) Although most of his teammates changed their looks over time, Jean-Paul stuck with his costume until Alpha Flight adopted a team look, all wearing the same red and white armor with a maple leaf symbol on their chests. [Alpha Flight (1st series) #103]

-) When the Canadian government disbanded Alpha Flight, Northstar returned to his classic black and white look. Even later on, when he affiliated again with a re-organized Alpha Flight, he stuck to it. [Northstar #1]

4) As a member of the X-Men, Northstar received a new uniform that was mostly of gray/silver color with some padded armor elements and a red visor. The costume also featured an element from Jean-Paul's most prominent outfit, namely the star logo on his right hip. [Uncanny X-Men (1st series) #415]

-) Upon being manipulated by the Hand and Hydra (and later the Children of the Vault), Northstar returned to his classic black and white costume.

5) When he first joined the X-Men in San Francisco, Northstar wore his original costume with a red and yellow ‘X’ badge on his left breast. In time, he would adopt a slight variation on his classic look with the starburst on his opposite hip, connected to a white belt design and stripes on his arms and leggings. [Uncanny X-Men (1st series) #509] 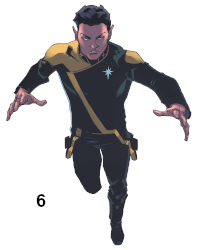 6) Northstar was affected by his time in the X-Man's pocket reality as a member of the fascist memory police, Department X. [Age of X-Man: The X-Tremists #1]

7) While leading X-Factor Investigations, Northstar adopted an all-black ensemble with an overcoat. The coat had lapels, colored white on the inside, and the four-pointed circle that served as the X-Factor symbol on his left shoulder. There was also a thin white outline circling his waist that resembled his old starburst design. [X-Factor (4th series) #2]