Megan Gwynn hails from the rural Welsh town of Abergylid and the moment she was born she was destined to cross the X-Men’s path. Her mother was a powerful member of a race of faeries and her father was the villainous mutant Mastermind. Megan would end up with aspects of both her parents' abilities but neither would present themselves until she was older. Her mother relinquished responsibility for Megan, letting her be raised by her grandparents in the quiet Welsh countryside. While the young girl was aware of her mother, she had no idea who her real father was. Instead, she believed he was a kind coal-miner who died in a tragic cave collapse. [X-Men: Pixie Strikes Back #4, X-Men: Pixies and Demons #1] 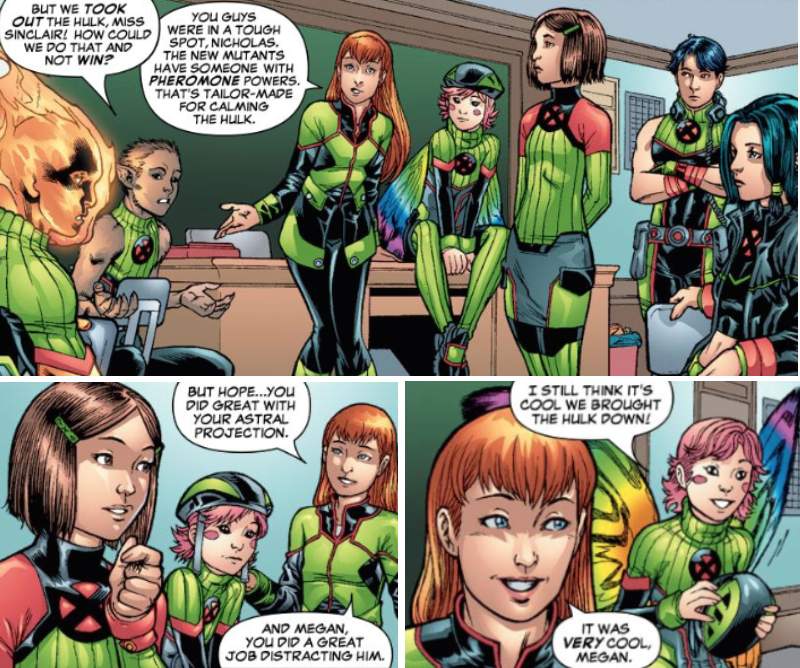 When Megan’s powers manifested, her grandparents enrolled her in the Xavier Institute and she travelled to America where she could be around others like herself and be taught about her mutant powers. Taking the name Pixie, Megan was put in the Paragons training squad, which was watched over by former New Mutant, Wolfsbane. Since her powers were still rather new, Pixie tended to wear a crash helmet until she learned how to fly without crashing into things. As well as her regular school work, she would also train under the tutelage of the senior X-Men in the use of her powers and run combat scenarios in the Danger Room. In a little competition with Dani Moonstar’s own New Mutants squad, the Paragons managed to beat the Hulk, with Pixie posing as a valuable distraction. Even though they still lost, Pixie managed to keep her upbeat attitude, which she would become well known for. [New X-Men: Academy X #5, 12]

When Wolfsbane was discovered to be having an affair with a student, she was dismissed from the Institute. As a result, the Paragons were now without a supervisor and were disqualified from the field day competition. While some of the other students were annoyed at being left out, Pixie just

wanted Wolfsbane back in charge of them. [New X-Men: Academy X #14]

Pixie, like many of the other students, remained in the background for most of the semester, as the other more combat-ready students took the lead. However, things took a tragic turn when most of the world’s mutants were suddenly depowered. Pixie was one of the few who retained their powers but many of the other students weren’t so lucky. Many were hurt trying to ignite their powers and some were even killed. Once the chaos had died down, Pixie stayed close to the other powered students, as there were now fewer than 200 mutants in the world and their enemies were out to get them. [New X-Men (2nd series) #20-21]

The reality of the situation was starting to sink in as a group called the Purifiers quickly became a serious threat. Emma Frost saw no option but to dissolve all the training squads and form a new one out of the best students remaining. Pixie, along with everyone else, was locked in the Danger Room and forced to compete in an all-out fight to determine who would be on this squad. Whilst she fought valiantly, Pixie wasn’t chosen for the final squad. Later that night, tragedy struck once more when the buses carrying the depowered students home were blown up by the Purifiers. [New X-Men (2nd series) #23]

Over the next few weeks, the Purifiers laid a bloody siege on the students that left many dead. Pixie survived but her cheery persona was starting to strain. Then one night as the students were relaxing, the precognitive Blindfold decided to tell them all a story. She told them of the history of 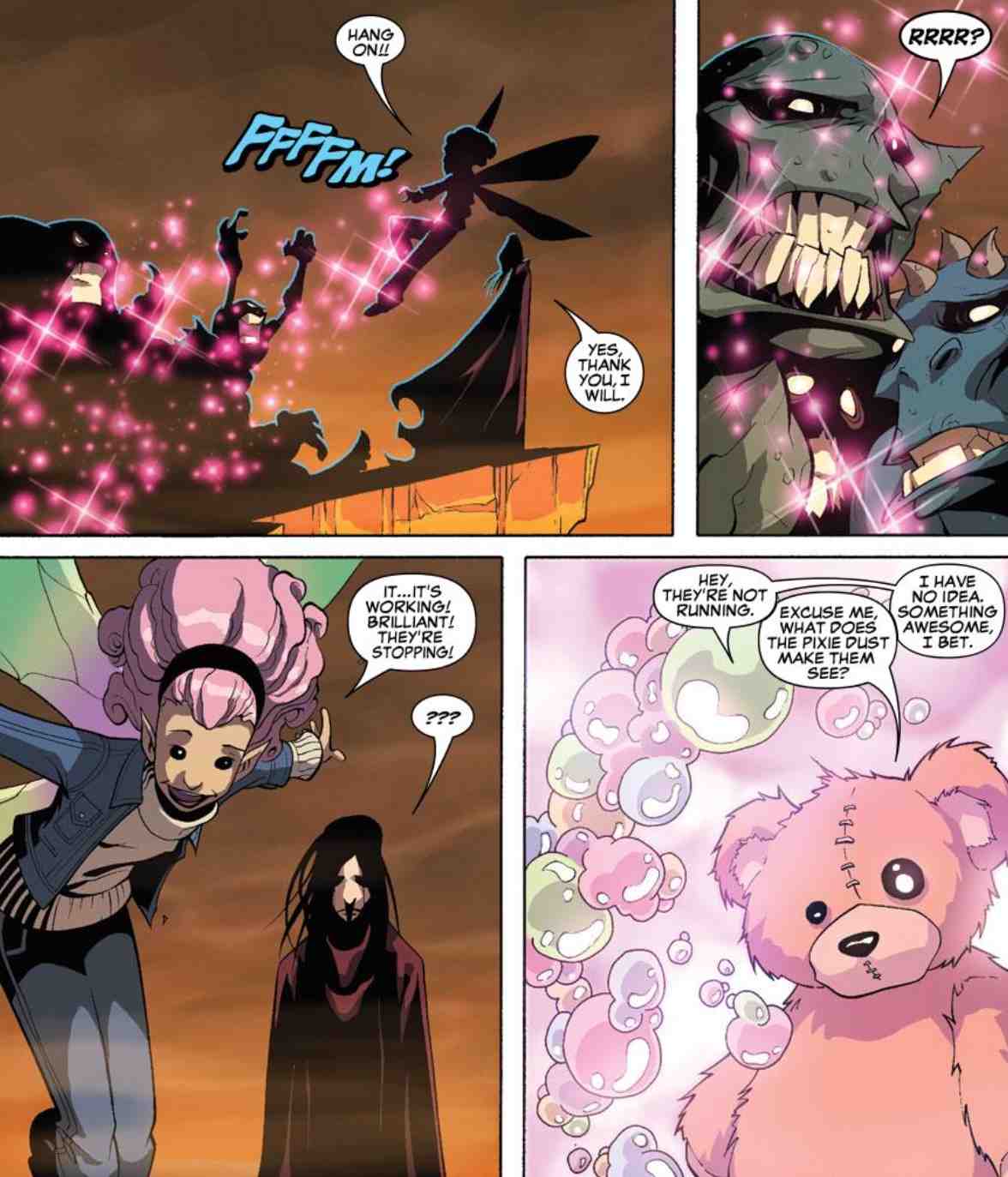 Illyana Rasputin, aka Magik, and the young girl’s traumatic backstory. As Blindfold was speaking, it became clear she wasn’t just telling a story from the past but of events happening right then. The students were naturally wary and, when Pixie asked if they were going to be okay, Blindfold cryptically apologized to the young girl for her loss. Before anyone could question what she meant, the floor literally ripped open and the kids were seemingly sucked into Hell.

While it wasn’t Hell they landed in, the demonic realm of Limbo was a close match. Many of the students had been personally captured by the forces of Belasco and taken to his base. Pixie, along with a group of others, had landed in the wastelands away from the action. They quickly began to argue over the course of action until they were set upon by a horde of demons. The group made short work of the demons, with Pixie even protecting Blindfold by using her hallucinogenic dust.

The demons kept on coming though and the group was in dire straits. Thankfully, help showed up in the form of Magik, whose apparent resurrection and demonic look caused them to be apprehensive of her intentions. Magik informed them that their friends Belasco had captured were being tortured and she could feel them dying. She said that all she wanted was one of their souls so she could create a soulsword to defeat Belasco with. Illyana could not wield the magic necessary because Belasco had resurrected her body, and her mind, but not her soul. The rest of the group 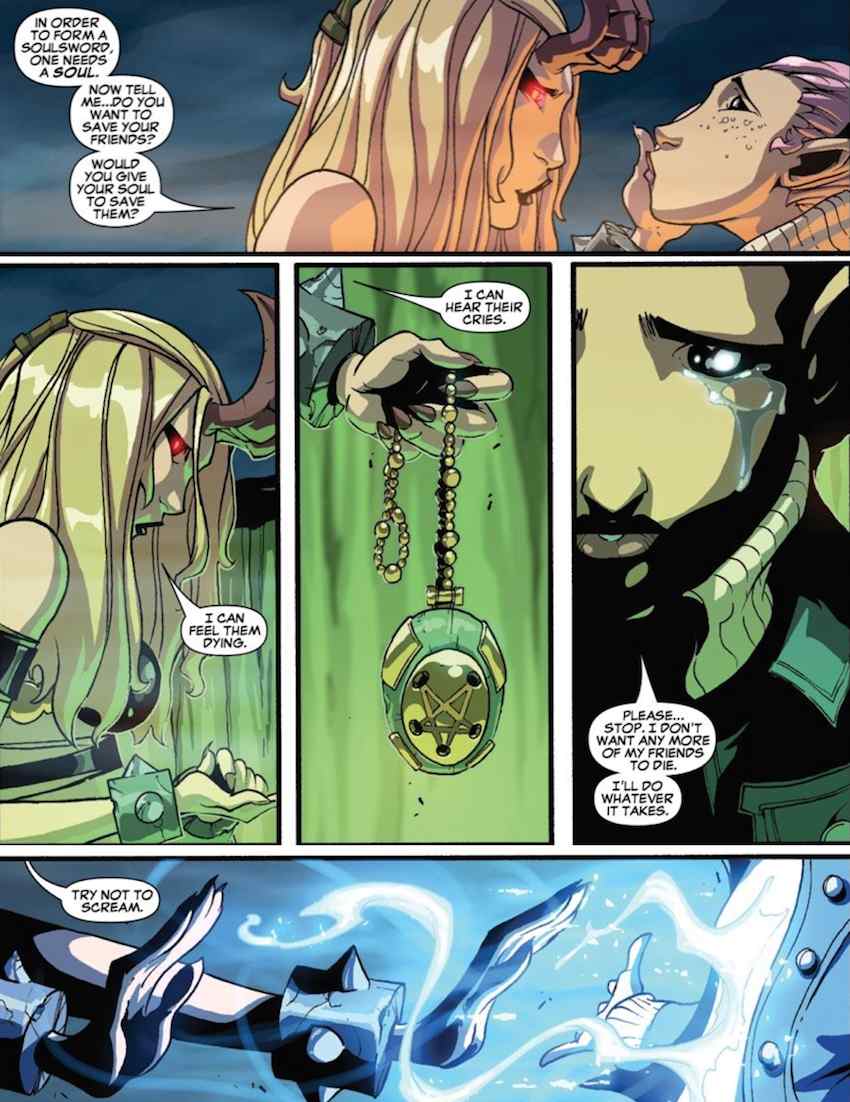 began attacking Magik but she easily outwitted them and cornered Pixie. With Pixie alone, Magik continued her emotional manipulation until the young girl gave in and offered up her soul so she wouldn’t have to see any more friends die. Magik began ripping Pixie’s soul out and filling up her Bloodstone amulet with it. Unable to stand by and let it happen, Anole broke free of the restraints Magik put him in and he punched the sorceress, disrupting her spell. The damage was done though and one of the five bloodstones was now in the amulet, signifying Pixie had lost a part of her soul.

As a physical manifestation of her loss, Pixie’s hair had now turned mostly black, with only a few streaks of her regular pink color remaining. With a part of her soul gone and replaced with black magic, Pixie was now able to summon a soul dagger and cast spells. Magik taught her a simple teleportation spell in a bid to get the group to Belasco’s base to rescue their friends. When they arrived, a huge fight broke out, which Magik and the students eventually won. Unfortunately, possessing one fifth of a soul wasn’t enough for Illyana and she wanted the rest of Pixie’s to make her complete again. She was stopped by the arrival of the X-Men and her brother Colossus. Ashamed by what she was, Magik cast everyone out of Limbo, including Pixie, who was left with a hole in her soul. A very small silver lining to the whole ordeal was that both Pixie and Anole were now drafted onto the New X-Men training squad. [New X-Men (2nd series) #37-41]

Pixie was checked out by Dr. Strange and Amanda Sefton and both agreed Pixie would be okay, even though she had lost a part of her soul. Dr. Strange even offered to train her in the use of magic, once she reached eighteen. She seemed to bounce back very quickly and was her usual upbeat self in no time, much to the annoyance of some of those around her. [New X-Men (2nd series) #42] 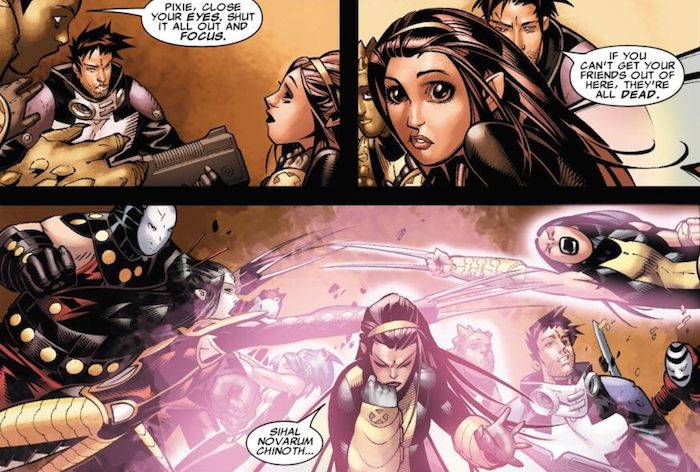 When the first mutant baby after the mass depowering was born, a number of different factions raced to take control of it. The X-Men wanted to protect it, Mister Sinister wanted to experiment on it and the Purifiers simply wanted to kill it. As the senior X-Men dealt with the situation, the New X-Men squad were sidelined. Their animosity towards the older group grew when they learned the Purifiers were involved and they decided it was the right time to get revenge for all the suffering the zealots had caused. Pixie teleported the team to a Purifier base in Washington but they were caught off guard by Lady Deathstrike and her Reavers. The students were no match for the cyborgs and, if it hadn’t been for the undercover Rictor calming Pixie down so she could remember her spell, it might have ended in tragedy. Pixie’s spell worked but the group was scattered up the east coast of the United States. Iceman broguht the Blackbird to pick up the scattered trainees, and the situation with the baby progressed. Eventually, it was discovered Sinister had the baby on Muir Island and so the X-Men travelled there to save it.

Unbeknownst to everyone else, the Purifiers had unleashed a secret weapon in the form of the near-indestructible mutant-hunting beast, Predator X. The animal attacked the students at the Institute 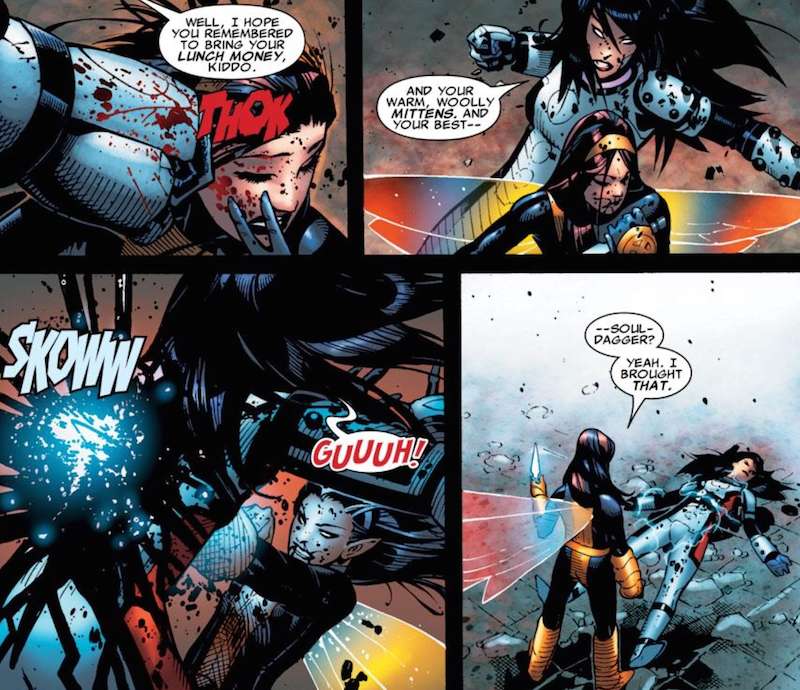 and, with few senior X-Men to fight it off, things looked dire. Cornered in the medical bay, Pixie teleported everyone, including the Predator X, to Muir Island in the hopes X-23 could kill the beast like she had done to a previous one. They landed in the middle of a battle between the Marauders and the X-Men and immediately leapt into action. Pixie squared off against the Malice-possessed Karima Shapandar and took quite a beating until she unleashed her soul dagger and stabbed the woman. As a side effect, Pixie inadvertently managed to purge the evil psychic mutant from Karima, freeing her from possession. The Marauders were ultimately defeated and the baby was saved, being subsequently given to Cable so he could raise it in the future out of harm’s way. Unfortunately, Xavier had been shot during the conflict and seemingly killed, leaving the X-Men at a crossroads. Declaring the X-Men over, Cyclops disbanded the team and sent Pixie and the rest of the students home. [Messiah Complex crossover]