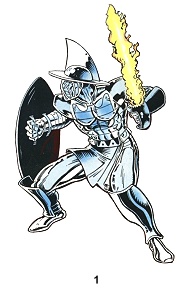 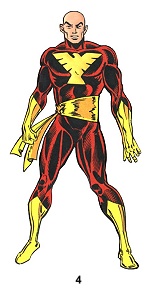 1) When Charles Xavier battled his first evil mutant, Amahl Farouk, aka the Shadow King, he manifested this suit of “astral armor.” This armor had a distinct style with elements reminiscent of both gladiators and conquistadors. He also wielded a large shield and a sword, composed of psionic energies. This armor often manifests when Xavier does combat on the astral plane. [Uncanny X-Men (1st series) #117]

-) Teaching and training the X-Men, Professor Xavier was most often seen wearing a suit and tie. [X-Men (1st series) #1] On occasion, he has been known to wear a more rugged and adventurous-looking outfit, consisting of a khaki jumpsuit with an X-symbol on the shoulder and a fitted black shirt or sweater underneath. He often wears combat style boots and simple gloves with this look. [New Mutants (1st series) #50-51]

2) After being cloned by the Shi’ar and recovering the use of his legs, Professor X decided to take a more active role in the X-Men’s adventures. He adopted this fairly simple costume, consisting of a yellow bodysuit, blue boots and gloves with black trim and a large black X that crossed his chest and joined with a black “belt.” [Uncanny X-Men (1st series) #181] There was also a second version of this suit, with the color-scheme being reversed: a yellow X on a black bodysuit.

3) When the X-Men teamed up with Alpha Flight to take on Loki, Charles wore the standard New Mutants costume shown here. It was shortly after this adventure that he stopped adventuring with the X-Men and no longer had a need for a costume. [X-Men & Alpha Flight (1st series) #1]

4) During his time with the Starjammers, Xavier possessed a fraction of the Phoenix Force for a short time. He used these energies and the psychological impact of the Dark Phoenix costume to inspire a rebellion against Deathbird’s cruel rule of the Shi’ar. [X-Men: Spotlight on... Starjammers #2] 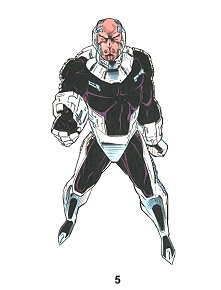 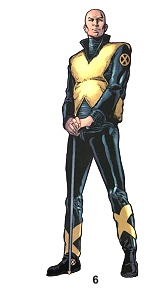 5) Leading an offensive assault against Magneto, Xavier donned this special exoskeleton that allowed him to walk. It was powered by his own mind and was particularly taxing on his psionic powers. The suit included a form-fitting, deep purple bodysuit with silver armored components and cybernetic power links that framed Xavier’s face. [X-Men (2nd series) #25]

6) After Xavier publicly announced that he was a mutant and fully re-established the Xavier Institute as a school for mutants, he and his staff of teachers took to wearing similar uniforms. In Xavier’s case, this consisted of black leather pants, a ribbed gray sweater with an X logo in the center of the chest and a black leather jacket and boots with yellow X accents. [New X-Men #114]

-) Operating on Genosha, Charles has returned to wearing khaki military pants and combat style boots, along with a fitted black shirt with a small X-logo on it. [Excalibur (3rd series) #1]

-) After reconnecting with the X-Men Charles tended to stick to wearing his trademark suit and tie.

One of the characteristics that make Professor Charles Xavier a unique character is the fact that he is a paraplegic. Over the years, his most distinctive visual trait hasn’t been a costume but his wheelchair. Presented here are some of the most prominent styles of wheelchairs he’s used during his career. 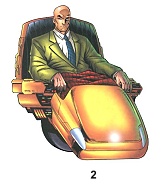 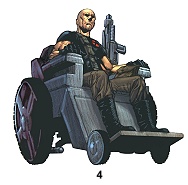 1) For many years, Xavier used a very standard wheelchair, like the one shown here. He continues to use a standard chair, rather than his more high-tech chairs, during public appearances. [X-Men (1st series) #1]

2) This high-tech chair was a gift from the alien Shi’ar. Over the years, its appearance has varied a bit. Both gold and silver versions have appeared and some models have been slightly sleeker than others. [X-Men (1st series) #125]

3) Around the time that he re-established the Xavier Institute as a school, Charles began using this unique, three-wheeled chair. He only used it a short time, since he temporarily regained the use of his legs shortly thereafter. [New X-Men (1st series) #114]

4) When Xavier moved to Genosha to help rebuild the island nation, he used this more heavy-duty, motorized, all-terrain chair. It has since ceased functioning, just like most other technical devices in the area. [Excalibur (3rd series) #1]