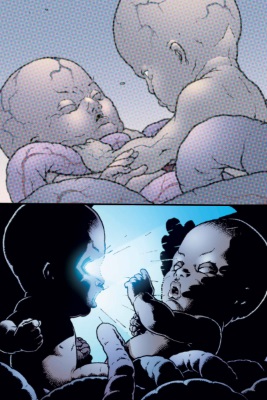 Charles Francis Xavier is the son of Brian and Sharon Xavier and was the only living child born to the couple. According to Shi’ar lore, every being has a Mummudrai - a spiritual opposite that is all the evil the person is not. In Charles’ case, for whatever reason, said Mummudrai took on a physical form as his twin sister in the womb. Sensing the creature’s evil, the still-gestating Charles instinctively fought and killed it. When the twins were born, only Charles lived, the “daughter” emerging stillborn. Nonetheless, the power of this Mummudrai survived and would later become known as Cassandra Nova. [New X-Men (1st series) #121]

Though born to a wealthy family, Brian Xavier had become interested in science, not only earning a doctorate in nuclear physics but becoming a well-reputed scientist. He eventually took a position on a secret project in Alamogordo, New Mexico, working with colleagues such as Kurt Marko, Jacob Shaw and Alexander Ryking. Other than doing nuclear research, they also aided Amanda Mueller in the Black Womb program, documenting the genetic make-up of mutant babies. What none of them knew was that they had been gathered by Mister Sinister, who was going under the name of Dr. Nathan Milbury at the time. Given that both men eventually had children who were mutants, it’s possible that Xavier and Ryking might have actually (consciously or accidentally) caused the mutations of their sons.

Regardless of the intentions, Sinister took a special interest in the children of the team and used them as part of his experiments to achieve immortality. He encoded himself into their genetic structure and added an activation switch to it. In the event of his death, the switch in one of the subjects would activate and Sinister’s DNA would overwrite the code of the host and allow him to be reborn. Charles was very young during the experiments and eventually forgot all about Dr. Milbury and the tests that had been done on him. Charles and Carter would spent most of their time together, until Carter manifested his dangerous mutant powers and had to be kept sedated. [X-Men Forever #4, X-Men (2nd series) #12-13, X-Men Legacy (1st series) #211-214]

Charles didn’t have the time to worry about his friend’s disappearance, for his entire life was turned upside down after his father was killed in a nuclear accident. After grieving for a while,

Charles' mother Sharon Xavier sought succor with Brian's colleague, Kurt Marko, who was only too happy to marry Sharon and her wealth. The two soon abandoned New Mexico and moved into the Xavier family mansion in Westchester, NY. His telepathic powers slowly emerging, young Charles was distrustful of Marko’s motives right from the start and, within a short time, Sharon too realized that Marko had no true feelings for her. When she took to drinking, Kurt Marko started to abuse her and Charles’s tried his best to offer his mother some comfort. She died soon afterwards, her death possibly related to her burgeoning alcoholism.

Kurt Marko had also brought his unruly teenage son, Cain, with him into the marriage. Cain took an intense dislike to the gentle, smart Charles, especially as it soon became clear that his own father preferred Charles to him. Father and son didn’t get along and Cain tried to blackmail his father for money, hinting at the death of Brian Xavier having been no accident. Kurt Marko yelled at Cain never to accuse him of such a thing, but it was already too late, Charles having overheard the conversation. The argument turned into a fight, during which some lab equipment exploded. Though mortally injured himself, Kurt Marko carried the two teenagers to safety. With his dying breath, he revealed to Charles that, while he hadn’t caused his father’s accident, he could have prevented it and also warned him to beware of Cain.

Charles had been able to sense emotions before, but at high school and college his abilities bloomed. Both thanks to his powers and his natural intellect, he became a brilliant student, as well as a gifted athlete. However, he chose to give up sports, as his powers gave him an unfair advantage. One side effect of his powers was that he lost his hair while he was still in his late teens.

Unfortunately, as the years passed, Charles and Cain’s relationship grew no better. The mutual dislike of the two brothers remained, especially after Charles, fed up with being bullied, beat up Cain, using his mental powers to his advantage. At another point, Cain’s reckless driving caused an accident that almost cost Charles his life. [X-Men (1st series) #12, Uncanny X-Men (1st series) #309]

The two parted ways when Charles attended university in Oxford, having won a scholarship to that school. There, Charles met a brilliant mind that matched his own - Moira Kinross. The young 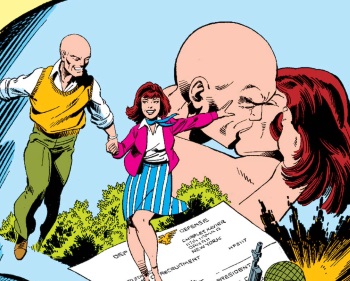 woman from Scotland took a liking to him, but unfortunately already had a boyfriend, the jealous, brutish - yet charming, if he wished to be - Joe MacTaggert, who mocked Charles as not being a real man and warned him to stay away from “his girl.” Shortly afterwards Joe and Moira had a motorcycle accident, due to Joe’s reckless driving. Mentally sensing Moira’s pain, Charles came to her rescue. Moira split up with Joe and she and Charles became a couple. So happy were they with each other that they made long-range plans, including marriage. However, first, Charles was drafted to go to war and saw this as his chance to prove Joe MacTaggert he was wrong about him. [X-Men (1st series) #117, Uncanny X-Men (1st series) #389]

The war in Korea literally was hell for Charles, given his powers and empathy. However, he managed to carve himself a niche in ‘search and rescue,’ quickly gaining himself the nickname “the Good Shepherd.” As luck would have it, he was at one point stationed in the same unit as 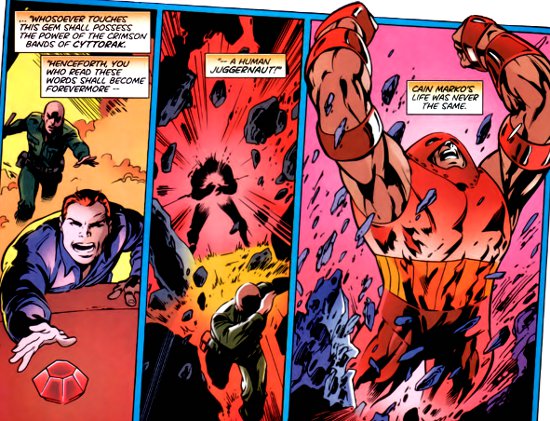 his stepbrother, Cain. Their unit under fire, Cain deserted and Charles chased after him. In a cave, they stumbled upon the ruins of the temple of Cyttorak, a glowing ruby lying on the altar in the temple’s center. Reading the hieroglyphics on the wall, Xavier recognized the warnings of the gem’s enchantment but Cain would not listen to his hated stepbrother. Instead, he picked up the jewel, instantly transforming himself with the curse of Cyttorak into the powerful Juggernaut. There was a cave-in and Charles, unlike the transformed Cain, managed to get out. However, he feared that sooner or later Cain would get out and try to get revenge on him.

Also during the war, Charles received a “Dear John” letter from Moira, telling him she wanted to break up. While she didn’t give him the reason, presumably she had been charmed back by Joe MacTaggert, with whom she later married and had a child. [X-Men (1st series) #12, Uncanny X-Men (1st series) #389]

So, after his tour of duty was ended, Charles had no immediate reason to return to the States. Being wealthy, he traveled the world. First to Kirinos, where he got over the pain of losing Moira, 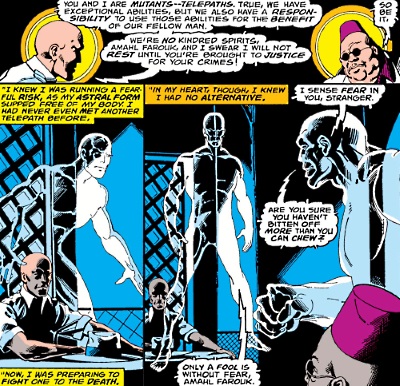 then to other locales, such as Cairo. There, he was pick-pocketed by a young, white-haired girl (who was later to become Storm). He mentally stopped her and noticed something extraordinary about her mind. However, before he could further examine her, he was psychically attacked. Xavier followed the source of the attack into a café, where he met Amahl Farouk, self-styled crimelord of the city, and the first fellow mutant Charles had met. Farouk was a telepath of Charles’ caliber, only with more experience. Seeing that he couldn’t lure Charles to his side, Farouk faced him in a death duel on the Astral Plane. Farouk proved better, until Charles with a last effort pulled his power into one blast and dispersed Farouk’s essence, believing to have destroyed him. [X-Men (1st series) #117]

During his travels, Charles was called into an old temple, where he found two women psychically battling a demon named Synraith that was looking for entrance into our dimension. Charles added his psychic powers to theirs and helped banish the demon. Despite his help, the women, Gracie Gamble and Cuckoo of the Clan Destine, made him forget what had happened. [X-Men & Clan Destine #1]

A few weeks later, Xavier visited an old friend, Daniel Shomron, who had opened a clinic for traumatized Holocaust victims in Haifa. There, he met two people who would become very important to his life. One was Gabrielle Haller, a catatonic Holocaust victim. Charles used his mental powers to force her back to awareness and, as Gaby recovered, they fell in love. The other was a volunteer worker who helped in the clinic, a man known only as Magnus, who had also been a victim of the Nazis. 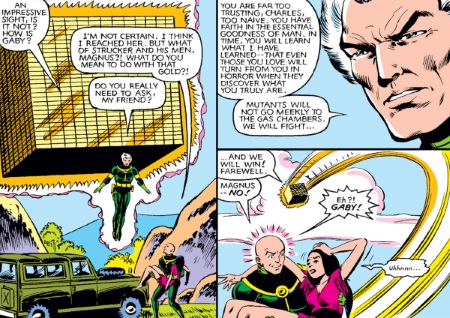 Finding a kindred spirit in Magnus, the two became quick friends and discussed the possibility of genetic mutation, neither of the men admitting what they truly were to each other. While Charles was optimistic about man and mutant being able to co-exist, Magnus doubted it, having soured on humanity, thanks to his own experiences with the Nazis. When Gaby was kidnapped by Hydra agents who believed she had been programmed by Nazis with the location of a cache of gold, Magnus and Charles were forced to admit their powers to each other and worked together to save Gaby. Afterwards, Magnus stole the Nazi gold and left to start building his base of power in the name of mutant superiority. Charles continued to stay in Israel for some time, but eventually he and Gaby split amicably. Charles left not knowing at the time that Gabrielle was pregnant with his son. [Uncanny X-Men (1st series) #161, 321]