Xavier's peace was not to last, as his oldest and most persistent foe, Amahl Farouk aka the Shadow King, would rip his spirit from the afterlife and hold it captive on the astral plane. Farouk desired control over the physical world and wanted to use Xavier to do it, only he needed to defeat the man's spirit and asborb it in to his first. It was easier said than done though, as Xavier put 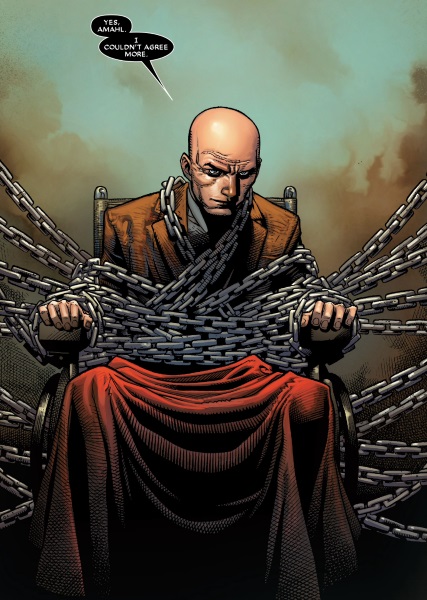 up a tremendous fight, with the two men fighting battle after battle. To Xavier, the war they conducted seemed to last for thousands of years and he used every psychic trick he could think of, but he knew sooner or later Farouk would wear him down. Farouk began reaching out from the astral plane and attacking psychics in the real world, which caught the attention on the X-Men when he took on Psylocke. A small team of X-Men travelled to the astral plane to take on Farouk and Xavier used the intrusion as an opportunity to plan his escape.

The X-Men that travelled to the astral plane were easily over-powered by Farouk, but Xavier played into the man's sadistic side by getting him to make a game over it. As Farouk tried to break the X-Men one-by-one, Xavier made a hard choice and allowed him to take over some, knowing it would start to put a strain on the evil psychic.

Unbeknownst to Farouk, Xavier reached out and contacted Rogue, Mystique and Fantomex and empowered them so that they could fight the Shadow King directly. Farouk's attention started to become divided as he was now concentraing on keeping Xavier chained up, toying with the X-Men and also expanding his psychic influence in the real world. Farouk allowed his hold over 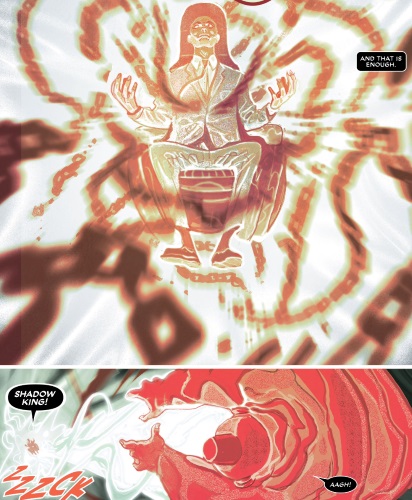 Xavier to loosen as he fought attacks on multiple fronts. It was all Xavier needed and he burst free from his shackles, immediately regaining his strength and defeating Farouk both quickly and brutally. As the X-Men started to regain control over events in the real world, Xavier decided it was time for him to rejoin his team once more. The problem of not having a physical body was quickly solved when Fantomex decided to let Xavier take over his. The French thief had a questionable track record with the X-Men but he felt it was the best option to allow Xavier to be reborn. Psylocke was particularly shocked when Xavier greeted her in Fantomex's body, and she aired her worries as to whether it was truely Fantomex's choice to remain on the astral plane and have Xavier use his body. [Astonishing X-Men (4th series) #1-6] 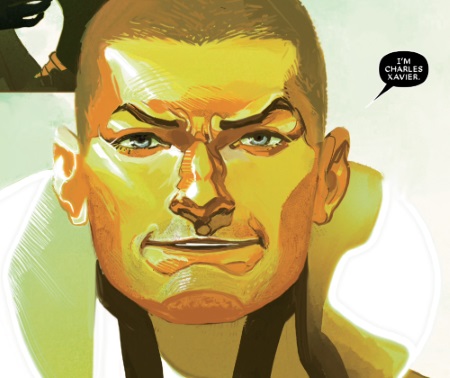 The chaos caused by the Shadow King's invasion into the physical world was still on-going and so Xavier took his new brain for a test drive. Firstly, he confronted Angel, who had slipped into his deadly personality once more whilst fighting the Shadow King. With a mere telepathic nudge, Xavier rid Warren of his split persona, giving him full control of his feathered and metal forms without triggering his Archangel personality. Next, thanks to the Shadow King, the citizens of London had been infected with some kind of psychic virus and so Xavier purged it from their minds, setting them free. Next, he also squared things away with the authorities, who had been very close to nuking London to stop the infection spreading. However, in his bid to rid London of the infection, he had gathered its psychic essence together until he could dispose of it. This was the wrong thing to do, as the essense turned out to be the dissipated particles of Proteus, and by forcing them together Xavier inadvertantly resurrected the dangerous mutant. [Astonishing X-Men (4th series) #7]

The rest of the X-Men were still unsure as to whether they could trust this new Charles, who preferred to simply be called X. Proteus used their confusion to power himself up with energy and escape before he could be killed again. X knew it was a race against time to defeat Proteus, and 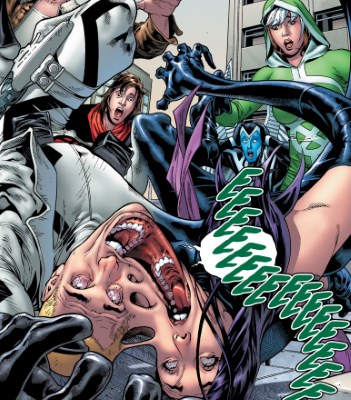 so he teamed with Psylocke to confront the crazed mutant on the astral plane. However, when they confronted Proteus they found him to be calm and rational. He told the two he just wanted to live in peace, but X didn't believe his word and tried to kill him. In retaliation, Proteus psychically merged X's and Psylocke's bodies with his reality-warping powers. In the real world, the rest of the X-Men were forced to act quickly to split the two apart, with Logan stabbing X's body with his metal claws to purge Proteus's influence from him. Fantomex's body would have normally healed from the wound, but X did not possess the same powers and so he started bleeding out. Proteus managed to escape as the X-Men were forced to concentrate on saving X's life. [Astonishing X-Men (4th series) #8-9]

A silver lining to Proteus's attack was that X had seen that Proteus intended on bringing the astral plane to Earth using his reality warping powers. Proteus had fled to Scotland to enact his plan, and by the time the X-Men arrived he had already destroyed a town. X once again confronted Proteus and tried to talk him out of it, but his words fell on deaf ears. Proteus sent reality-bomb seeds across the planet in a bid to spread his influence, and the X-Men were forced to attack him head on in the hopes of stopping it. Psylocke and X took the fight to the astral plane and used the global network of psychics to halt the reality-bombs whilst the X-Men took down Proteus. The plan worked and Proteus was once again destroyed, but linking to the network of psychics 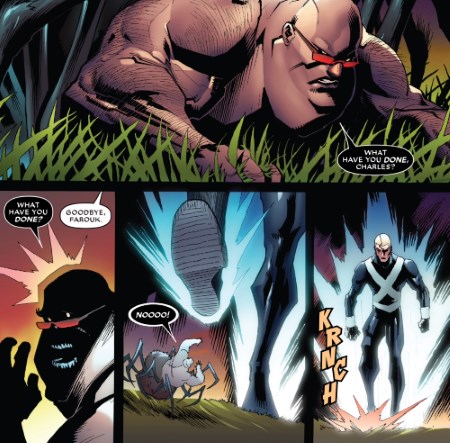 triggered a horrific transformation in X. The Shadow King wasn't as dead as everyone thought and he had been hiding away in X's psyche, waiting for the right time to strike. Erupting from X's body in the real world, Farouk used his psychic abilities to overpower the X-Men before they knew what had happened. X could only watch helplessly as his team was defeated, but watching them fall one-by-one gave him the strength and courage to fight back. Reforming his damaged body he beat back Farouk long enough to free Psylocke from his influence. Together the two linked with every psychic on the planet and used the power to destroy the Shadow King again.

Whilst he had been completely freed of Farouk's influence, the rest of the team were not so sure, 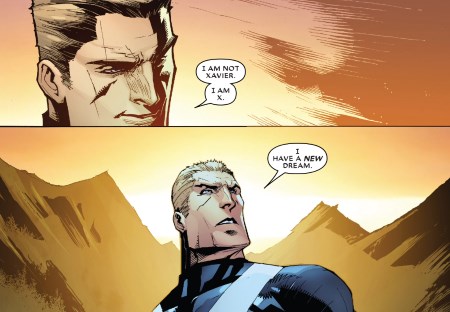 despite Psylocke vouching for him. X decided he needed time to think about his next move and so he erased his presence from the team's minds... all except Psylocke's, allowing her to remember that he was alive. He parted ways with her so he could go out into the world and find a new dream. [Astonishing X-Men (4th series) #10-12]

Charles Xavier is gone and the world has X instead. Will his dream for mutants be like his former self's, or will he have a whole new one to strive towards? Time will surely tell.