Charles’ salvation came in the form of Exodus, who had been working with the Marauders to find the baby. Seeing Xavier get shot in the head, he had Tempo freeze time so that he could carry the body away. Using Omega Sentinel’s cybernetic components to keep Xavier alive, Exodus employed 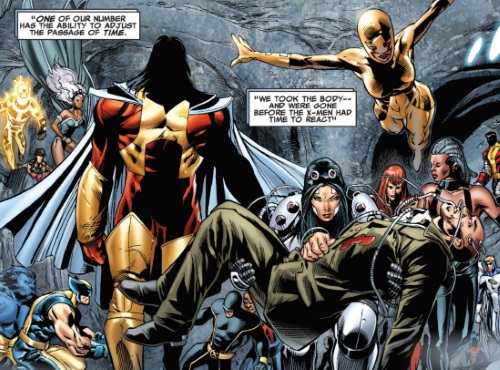 his vast powers to repair the physical damage done to him. He then tried to repair his psyche but found that Xavier’s mental walls were far superior to his own abilities and was unable to help him. Instead, he decided to completely destroy them and rebuild them from the ground up. Exodus removed Xavier’s memories and repaired his damaged mind. When he tried to put the memories back in again, he was met with resistance and so he decided to call upon Magneto to help. Whilst the master of magnetism was now powerless, thanks to his daughter, his voice managed to provoke a response within Xavier’s damaged brain and he finally woke up. When Exodus decided to try to kill Magneto, he was met with resistance from Xavier. Although he was still physically weak, he proved a formidable match for the ancient Exodus. The two fought a violent battle on the astral plane as the Acolyte tried to bombard him with all the darker memories in his mind. Xavier eventually won but was surprised to hear Exodus only challenged him as he wanted him to become leader of the Acolytes. Xavier turned down the offer, as he had numerous holes in his memories and wanted to fill in the gaps. Parting with Magneto again, he set off on his journey to face up to the actions of his past. [X-Men Legacy (1st series) #208-210]

Xavier decided that the best way to regain his memories was to visit people from his past and view their own memories of the time they spent together. The first person on his list was Carter Ryking, the man with whom Xavier had spent a lot of time  when they were both children in New Mexico. He found Carter in a mental institution and barely able to string a logical sentence together. Charles looked into his mind and saw memories of them both being experimented on by Dr. Milbury, which had been an alias of Mr. Sinister. After leaving Carter, Xavier soon realized that 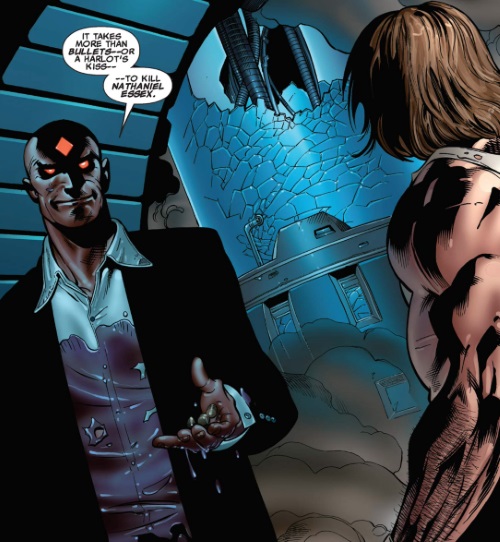 someone was hunting him down in a bid to kill him. He was saved by Gambit, who informed him that a hit had been put on him, as well as Carter, Sebastian Shaw and his brother Cain.

Charles was too late to save Carter but he figured out it all had to do with the work his father did when Charles was a child. After travelling to New Mexico, he was captured by the mysterious person who had put a hit out on him and discovered that it was his father’s old colleague, Amanda Muller. Mister Sinister had been killed a few weeks earlier and his grand plan to be reborn had begun. He had built a machine that would send out a signal, triggering the latent genetic code he had placed in all of the children many years before. Muller had found the machine and somehow added an altered code to her own DNA, in the hope she would gain Sinister’s powers but not his mind. Since only one person could be activated at any one time, Muller had seen to it she was to be the only one available to undergo the change. During his trip to New Mexico, Charles had been receiving visions of Sinister in his mind, which he now realized was the beginning of his metamorphosis into the villainous scientist. When Muller shot him, he decided to give in to the changes forcing themselves on his body and he became Sinister reborn. Charles’ psyche was imprisoned whilst Sinister dealt with Muller, but afterward he began to fight back. Whilst he fought Sinister for control of his body, Gambit and Sebastian Shaw managed to destroy the machine emitting the activation signal. With the machine gone, Sinister was severely weakened and Charles managed to defeat him and take back his body. [X-Men Legacy (1st series) #211-214]

Since he had been healed by Exodus, Xavier had stayed clear of the X-Men. However, in the wake of Sinister’s attack, Charles felt it necessary to make contact. He used a telepathic suggestion to trick Cyclops into leaving the newly-built base in San Francisco and head into the mountains, where Xavier awaited. When he realized he had been used, Cyclops was angry and 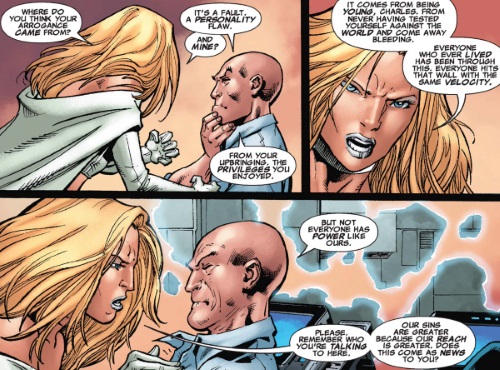 the two men shared some harsh words. Charles told him about Sinister’s scheme and, knowing how much the geneticist had been involved in Cyclops’ childhood, asked to probe his mind. Though he was angrier still at Charles’s audacity, Cyclops revealed that he had been well aware of his mentor’s manipulations before he had left his base. At this point, Emma Frost revealed herself and, before Charles knew what was upon him, she took him through a tour of his darkest and dirtiest memories. He was humbled by the way he had used his powers over the years to lie and force people to do his will. At the end of it all, Emma revealed that Charles’ mind was free of Sinister. He and Cyclops parted ways again, but not without coming to an understanding and putting some of the bad blood between them to rest. [X-Men Legacy (1st series) #215-216]

Xavier wasn’t the only one who was going over the past actions of his life and correcting his mistakes. Wolverine had recently had all his memories restored and now remembered his first meeting with Xavier and the fact he was originally sent to kill him. Wolverine’s son Daken had been heavily brainwashed and he knew that Xavier was the only man capable of undoing it, much like how he helped him many years ago. Xavier met with Wolverine but now it was he who 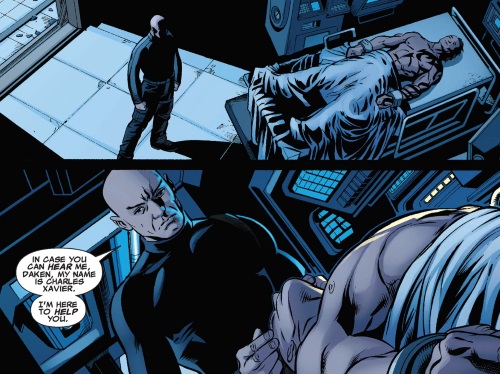 struggled to remember their first meeting. Xavier was forced to read Wolverine’s mind and relive all the immoral choices he made when he broke down the feral mutant’s psyche. When Daken was kidnapped, Xavier joined Wolverine in tracking the man down. After taking on the Hellfire Club’s Inner Circle, it became evident that Sebastian Shaw was involved and that he intended to recruit Daken to his side. They found Shaw’s base and snuck in but Xavier sensed another telepath there and was shocked to discover Sinister had been reborn in the body of a woman. He was almost caught off-guard by the woman but still managed to outwit her and knock her out. Finding Daken unconscious, Xavier took the opportunity to enter his mind and try to undo some of the brainwashing. He found the man’s mind was even more damaged than Wolverine’s and inadvertently triggered a psychic trap, forcing him out of the mindscape and knocking him out. Unconsciousness wasn’t something to stop Xavier though and he pulled Wolverine and Daken into his mindscape to sort out their issues. Daken was angry at his father but Xavier made him see that his anger was misplaced and he should really be angry at the man who brainwashed him. Xavier succeeded and Daken fought off Shaw and Sinister before making peace with Wolverine. Xavier apologized to Wolverine for brainwashing him for his own purposes years ago, but Wolverine surprised him by forgiving him. The two parted ways again with the air finally clear between them. [Original Sin crossover]

Facing the ghosts of his past wouldn’t be complete without confronting the only family he had left, his step-brother Cain. Knowing that Cain had given himself back to Cyttorak and had become the Juggernaut once more, Xavier took subtler approach. He waited till Cain was asleep and without his protective helmet and then he entered the man’s dreams. The two talked but things quickly turned violent and Cain murdered Xavier in cold blood. That was all Xavier needed to see and he used his powers to taunt Cain before revealing it had all been an illusion. Xavier gave his brother a stark warning that he would do well to stay out of his way. [X-Men Legacy (1st series) #219]

Next on Xavier’s list was another student he had lied to so that he could control them for his own cause. Rogue had been unable to control her powers for years but Xavier promised he would help her. Since Rogue was no longer with the X-Men, Xavier enlisted Gambit in helping to track her down. They located her at the Australian base the X-Men used years before, but which was now covered in holographic projections of the X-Men’s various battles. As the two men walked 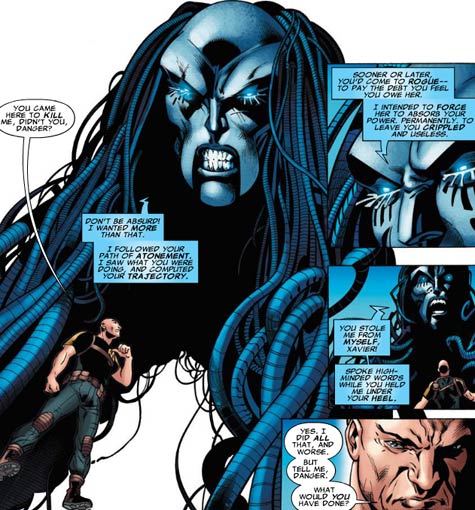 through the various battles, Xavier realized that they were looking at Danger Room scenarios and that there could only be one cause for the chaos. They discovered that Danger, the robotic manifestation of the training room, had tried to capture Rogue as part of a plan to lure Xavier out of hiding. However, her systems had been damaged and she had inadvertently enveloped the whole area in holographic scenarios. Xavier saw the chance to right another wrong he had made and he found the damaged Danger. Linking with her systems, he telepathically confronted her and showed her his memories of her creation. He apologized for his actions and, after a very tense confrontation, she dropped the holograms and returned the area to normal. He even spoke a code that completely freed the robot from her base programming, allowing her truly to be free. The group found Rogue and for the first time ever Xavier knew how to solve her out-of-control powers. Thanks to the holograms, he realized her powers were stunted in their activation stages and so, using Danger’s computer systems, he pushed Rogue’s powers forward. It was many years late but he finally made good on his promise and helped Rogue control her absorption powers. [X-Men Legacy (1st series) #220-224]

By now, Xavier had regained many of his lost memories and had righted a number of wrongs he had committed in his youth. He decided to return to where his journey started and paid a visit to Exodus and his Acolytes. Boldly walking into their base, he easily took out the Acolytes, leaving only Exodus to contend with. The two men talked and Xavier showed the godlike man that the path he was walking down would lead only to death and destruction for his people. Exodus remained steadfast in his beliefs until he saw Xavier’s memories and mistakes for himself. Finally relenting, Exodus disbanded the Acolytes and destroyed their base to find his own path. As Xavier watched it all, he was visited by Norman Osborn, who had risen to power as leader of HAMMER, a corrupted version of SHIELD. [X-Men Legacy (1st series) #225]