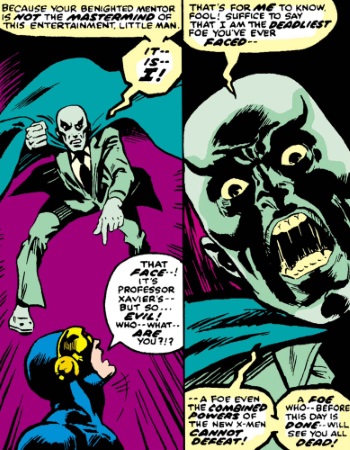 Naturally, Xavier blamed himself for his student’s death, but that was not the only thing troubling him. At the time, he was plagued by recurring odd nightmares of a war among aliens, each time the dreams seeming more real to him. Fearing that he was going mad, Xavier asked Moira MacTaggert to drop by and act as a housekeeper for a while, so that he could go on a short holiday. The nightmares so bothered the telepath that he lost control of his subconscious at one point, attacking the new X-Men with psionic constructs of the original team. However, when he woke up and his evil, repressed side showed itself too in a corporal form, Xavier was able to banish it. [X-Men (1st series) #96-97, 106]

Xavier’s recurring nightmare suddenly came true when the alien figure from his dream, Princess Lilandra, finally materialized in front of 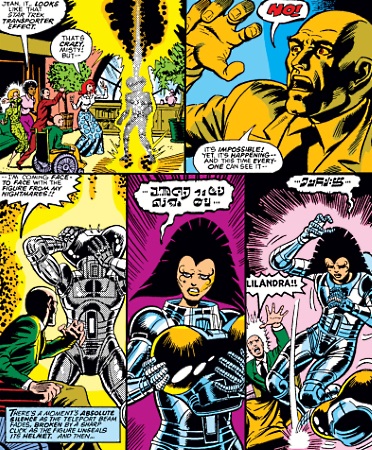 him, beamed down from her alien craft. It turned out that, several months ago, when Xavier had channeled the mental energy of humanity against the Z’Nox, a psi-link of sorts had been established between himself and Lilandra. Right when the mental wave hit her, Lilandra knew that she and he were soulmates, so she had come to Earth in search of him. Another reason was that she was on the run from her brother, mad Shi’ar emperor D’Ken, who intended to play with forces which could destroy the universe. Instantly trusting Lilandra, Xavier sent the X-Men to the Shi'ar Galaxy to help her stop D’Ken. Later, after their safe return, Xavier and Lilandra began a romance. [X-Men (1st series) #105-109]

Some weeks later, the X-Men were separated while trapped in Magneto’s base in Antarctica. The complex exploding, each half of the team believed the other dead. When Phoenix and the Beast 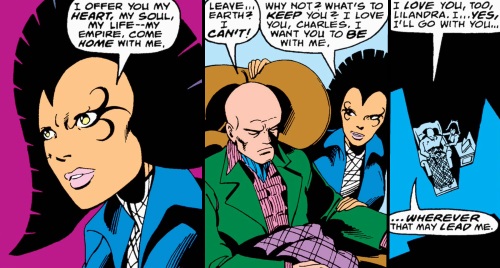 returned home and told the professor of the sad news, he gave in to despair and withdrew himself. Eventually, Lilandra convinced Charles to abandon Earth and take up her offer to return to Shi'ar space with her, as following her brother’s death she was now the empire’s official ruler. Life there was exciting and fascinating for Charles, in spite of his frustration about the more advanced species treating him like a primitive. In time, though, Xavier came to realize that it was partially his own fault, for he had expected to be treated with respect that he had yet to earn. After all, these alien people had no idea who he was, or what all he had already achieved in his life. [X-Men (1st series) #114, 117-118, Classic X-Men #31]

However, while studying the Shi’ar files, he learned about Phoenix’s true power levels and realized he never should have left to let her face those powers alone. Fearing that Jean Grey

would not be able to handle these near godly powers, he decided to return to Earth immediately and was in for a happy surprise as he learned that his “children” had survived after all. In the days that followed, Charles had no time to discuss her powers with Phoenix, as he was too busy getting used to working with the team again, trying for a stern approach as he had done with the originals. This got him into a conflict with Cyclops, who had learned over the months that he had to give this older, more individualist team more leeway. [X-Men (1st series) #125, 129]

They never got the chance to solve the argument, because, thanks to the manipulations of the Hellfire Club, Phoenix turned into Dark Phoenix. Although Xavier faced her telepathically and

managed to help the Jean aspects to regain dominance temporarily, the X-Men were approached by the Shi'ar, who considered her too dangerous to live on. It was rather hurtful for Xavier and Lilandra to be on opposing sides in this conflict, but the professor saw no other chance than to challenge the Shi'ar Imperial Guard to a duel over Phoenix’s fate. During the battle, though, Phoenix committed suicide herself, knowing that the Shi'ar were right about her. [X-Men (1st series) #135-137]

Life went on. With Cyclops taking a leave of absence to mourn for her, Xavier handed team leadership to Storm. Sometime later, Xavier became aware of Magneto being up to something big, as the magnetic fields of the Earth were being subtly altered, making long-range telepathic communication harder. He sent his X-Men to search for his longtime foe and eventually went looking himself. This led to another confrontation with the master of magnetism, which resulted in Magneto changing his path of violence, as he lashed out with his powers and accidentally almost killed Kitty Pryde, the latest addition to the X-Men. [Uncanny X-Men (1st series) #149-150]

Around the same time, Lilandra was kidnapped by an unknown party. As the trail led to Earth, the Shi'ar were about to attack the planet to demand their empress’ safe return. Before starting 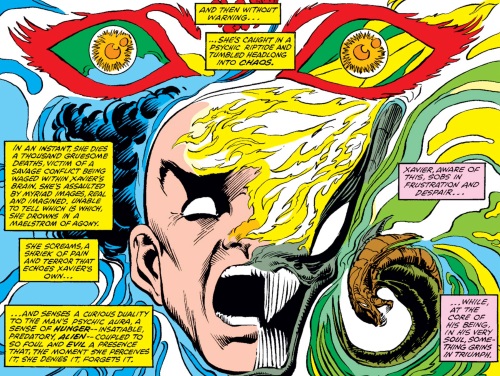 a war, though, they summoned the X-Men and gave them a deadline to sort out the situation. Their investigation revealed that it was actually Lilandra’s sister, Deathbird, who was behind the kidnapping. Unfortunately, Xavier ended up captured himself and, unknown to anyone, Deathbird had allied up with the alien Brood, an insectoid race that lay their eggs into hosts. While the professor was unconscious, he was infected with a Brood Queen embryo. By the time the X-Men rescued him and Lilandra, Xavier sensed a wrongness in himself but, when he tried to probe further, the embrro resisted and he fell into a coma. Xavier remained in this condition for weeks, until he came out of it due to his memories of Gabrielle Haller’s similar condition he had cured, unaware of the timebomb still ticking in his body. [Uncanny X-Men (1st series) #154-158, 161]

When the X-Men and Lilandra were abducted by the Brood in some sort of revenge act and believed to be dead, Xavier fell into a deep depression once more. Moira MacTaggert forced him to help a teenage mutant girl named Karma, forwarded to Xavier by the Fantastic Four. Shortly after, several other young mutants became involved or were being hunted by the renegade Hellfire Club member Donald Pierce. Eventually, Xavier and the youngsters beat Pierce together, which prompted Xavier to re-open school. However, he decided against re-forming the X-Men, as he was unwilling to risk the lives of another group of students. Actually, Xavier’s decision to gather a new set of mutants was influenced by the Brood Queen embryo growing within him, which took over at times and started testing the children, whom she considered perfect future Brood hosts. [Marvel Graphic Novel #4, New Mutants (1st series) #1-3]

The ties to the Sh’iar allowed Xavier to re-design the Danger Room and outfit it with highly sophisticated technology. The room was now able to perfectly create any combatant or environment using hard light holograms. However, when Charles was implementing the programming, something strange happened and the Danger Room spoke to him. Stunned that the computer had somehow gained sentience, Xavier contacted the Shi’ar for their advice, only to be assured that what he claimed wasn’t possible. At first, Xavier wanted to separate the consciousness from the computer but he was at a loss as to which lines of code to remove. Feeling that the training of his X-Men was more important than anything else, Xavier decided to ignore the sentience and lock it up within the software, a decision that would come back to haunt him in years to come. [Astonishing X-Men (3rd series) #12), X-Men Legacy (1st series) #223]

As was usually the case, the reports on the X-Men’s death had been exaggerated and the X-Men eventually returned from space. Upon their arrival, things came to a head as the Brood Queen hatched and Charles’ body fully transformed into that of an alien insectoid. His mind still being 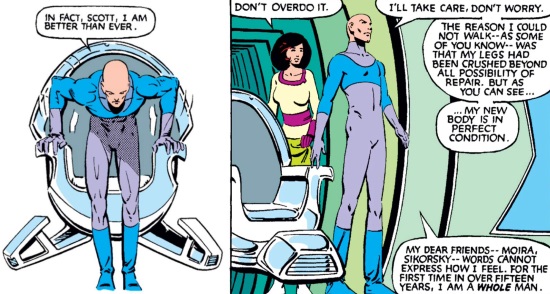 dominant, the X-Men saw a chance to save him with the help of the Starjammers’ medic, Dr. Sikorsky. Using alien technology, Xavier’s body was cloned and his mind transferred into the new body. [Uncanny X-Men (1st series) #167]

After some initial trouble, Xavier was finally capable of using his legs again, his new body no longer having any crushed legs. As a result, he not only wanted to work more actively with the X-Men but also in a leading capability. This brought him into leadership conflicts with Storm, who had worked rather hard and sacrificed a lot to gain her position. [Marvel Super-Heroes Secret Wars #12, Uncanny X-Men (1st series) #184]

All along, Xavier was unaware of the fact that all his repressed bad thoughts, his evil side so to speak, had gained sentience and terrorized the Microverse, where it was all powerful. The X-

Men were attacked by the Micronauts and their nemesis, Baron Karza, as they had followed the source of the evil entity to Earth. While the X-Men joined the Micronauts to help save the Microverse, the evil Entity took over Xavier’s body and began enslaving the New Mutants. Eventually, Xavier ran a bluff and managed to convince the Entity that he’d die, rather than let it have his body. Eventually, he was able to destroy the creature, though unfortunately he couldn’t undo the damage it had wrought. [X-Men and the Micronauts #1-4]

The leadership issue soon sorted out itself, as shortly afterwards Storm lost her powers and temporarily left the team. However, in the meantime, Charles had apparently realized himself that he wasn’t the best choice for field-leading the team. When the X-Men fought a dragon in Japan, Xavier was trapped underneath some debris and immediately panicked, believing to have lost the use of his legs again. Also, around the same time, the team happened upon Rachel Summers, who told them about the dark future timeline from which she came. Faced with the option that his dream could fail, Xavier discussed the team’s next steps with his students and eventually Nightcrawler became their leader for a short while. [Uncanny X-Men (1st series) #181, 188]