Presenting the image of being a stern teacher, Xavier made the young X-Men face a rigorous training regime and had them face dangerous situations, their first foe being Magneto, who would also prove to be their most regular opponent. While they faced him alone in their first battle, in later occasions Magneto was accompanied by his Brotherhood of Evil Mutants. It was just as Xavier had feared - he had not been alone in gathering young, promising mutants around himself… his old friend had done the same. This prompted Xavier to demand complete obedience from his students and, like a drill sergeant, he molded the five teens into an effective fighting force. In truth, he cared about his students a lot, especially about Jean, whom he secretly loved for some time. Charles wasn’t above entering the fray himself with his mental power, such as when his students were unable to lay a hand on the teleporting villain, the Vanisher. [X-Men (1st series) #1-6, 11]

Things turned personal for Xavier when his stepbrother returned, transformed into the mighty Juggernaut and bent on revenge. The Juggernaut was invulnerable and unstoppable and,

unfortunately, knew exactly where Xavier’s mansion was located. Cain Marko easily dealt with all defensive systems that Xavier had installed, and not even the mansion’s Danger Room, where the X-Men used to train, could keep him contained for long. When the telepath tried to use his mental powers on his stepbrother, it turned out that the helmet of the Juggernaut’s armor shielded him from such attacks. Only after the X-Men, along with the help of the Human Torch, managed to remove the helmet could the misguided Cain Marko be telepathically knocked out. [X-Men (1st series) #12-13]

When anthropologist Bolivar Trask made the “mutant problem” public again, Xavier tried to deter the coming anti-mutant hysteria by facing Trask in a TV debate. However, Xavier came 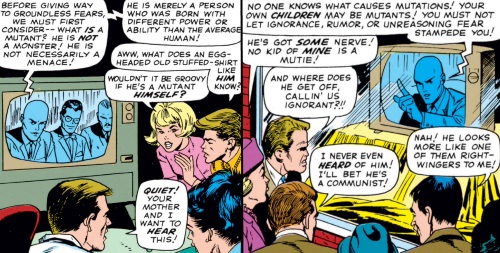 across rather stiff and arrogant, and the audience didn’t respond to his arguments very well. Instead of solving the problem, Xavier became witness to how Trask’s creations, mutant-hunting Sentinel robots, started terrorizing mutants before the X-Men managed to beat them. Trask saw the error of his way, but not early enough. The damage was done and the Sentinels had been released. When Trask tried to stop them, he was killed by his own creations, which had just one goal in their electronic minds - the extermination of mutants. Although the X-Men got lucky this time, the Sentinels were now an existing technology, which could only be further improved and used by other factions that would send the mutant-hunting robots after mutants again. [X-Men (1st series) #14-16]

Within a few months, it was clear to Charles that in Scott Summers he had a great leader among his X-Men. After naming the teen his second-in-command, Charles filled Cyclops in on some of the mansion’s secrets, like how to operate Cerebro, the mutant-tracking device. With

this done, Charles announced that he was taking some personal time away from his students. However, in fact, the professor didn’t go on some holiday trip but traveled to the Balkans in Europe in search of his old foe, Lucifer. Once he had found the villain’s new base, Xavier asked his X-Men to follow him and again the alien’s plans were thwarted. However, the aliens had already built another base, this time in the Midwestern area of the United States and were about to start their invasion Earth. With Professor Xavier falling into the villain’s hands, the planet’s fate was left to his students. As Lucifer was defeated a third time, his superior, Dominus, had enough of him and summoned him and all alien equipment inside the base back to their homeworld. [X-Men (1st series) #7-9, 20-21]

That Professor Xavier was someone who believed in second chances became apparent with the next X-Man to join the group. Calvin Rankin, aka the Mimic, had originally only joined the X-Men to get close enough to them to copy their powers. A few months after his betrayal, though, he made up his mind and joined the X-Men a second time. While he still displayed a rather arrogant attitude, Xavier sensed that the Mimic’s wish to help the X-Men was genuine this time. Not much later, though, Calvin lost his mimicking powers in battle against the Super-Adaptoid and left the group. [X-Men (1st series) #19, 27-29] 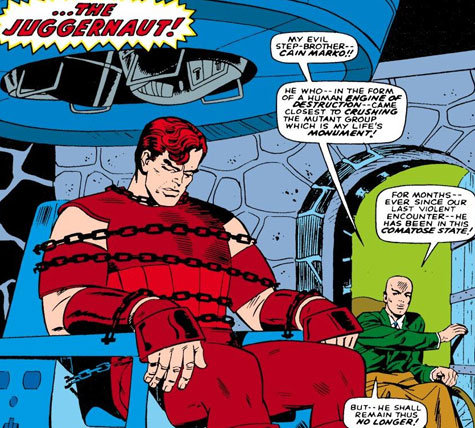 Charles also tried to cure his stepbrother of the Cyttorak curse. During the experiment, though, Charles Xavier was hit by an energy feedback and rendered comatose. Worse, some of his mental might was transferred to Cain Marko, who broke free and escaped. While the X-Men followed the rampaging Juggernaut and eventually banished him to another dimension, the mansion was left unguarded. Operatives of the mysterious group called Factor Three used this to their advantage, as they kidnapped the comatose professor from the infirmary. [X-Men (1st series) #32-33]

Fortunately, Xavier had trained his X-Men well and, although it took them several days, they eventually managed to track down Factor Three’s hideout in Central Europe. The group turned out to be several evil mutants the X-Men had fought before, all gathered by the so-called Mutant Master. At first hopelessly outclassed, the tides turned when the Mutant Master was revealed as a Sirian alien, who wanted to prepare Earth for the invasion from his race. In the aftermath of this victory, Xavier proudly declared that the X-Men had fully graduated, gave them individual uniforms and allowed them to work more independently. [X-Men (1st series) #35-39]

Sensing another danger from the stars, this from a malevolent species called the Z’Nox planning to invade Earth, the professor knew that he needed some time alone to prepare for 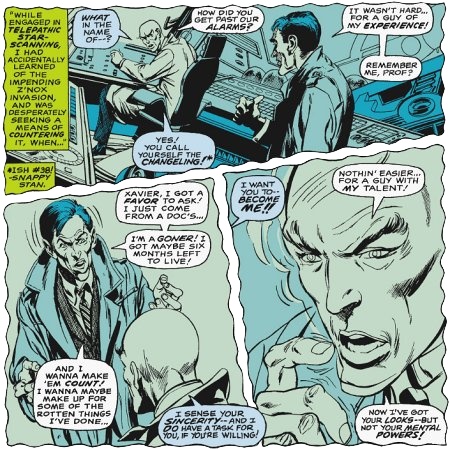 the menace. He awakened Jean Grey’s slumbering telepathy and shared part of his own mental might with the repentant villain, Changeling, who sought redemption as he was dying of a fatal disease. Xavier asked the Changeling to take his place with the X-Men so that his absence wouldn’t be noted, with only Jean being aware of the switch. Isolated in a secret, psi-shielded chamber beneath the mansion, the professor began to work on the task at hand, undisturbed by the X-Men’s regular struggles. However, things didn’t run that smoothly and, when shortly afterwards the Changeling fell at the hands of Grotesk, the X-Men believed their mentor to be dead. [X-Men (1st series) #42, 65] With Jean Grey still sworn to secrecy, the team even held a funeral for Xavier. 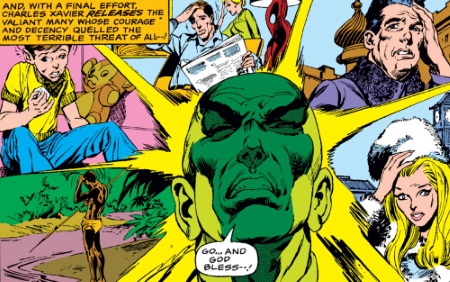 Months later after he had worked out his plans and the Z’Nox were about to attack, Xavier revealed himself again to the team. Using his own and the X-Men’s powers in concert, Xavier harnessed humanity’s entire mental energy to chase the aliens away. The ordeal nearly killed him, though, and it took a device of Dr. Bruce Banner to awaken him from the coma he fell into. [X-Men (1st series) #65-66]

At first there seemed to be some after-effects to the procedure, as Xavier acted sterner than usual, treating the X-Men as he had in the very beginning when they were less experienced. During that time, he also became romantically interested in Teri Martin, the mother of a young mutant girl he was trying to help, but felt there was no room in his life for romance. [X-Men: Hidden Years #1-22] X-Men business continued as usual, until an organization called the Secret Empire started kidnapping mutants to use them as a power source, even some of the X-Men among them. Together with Captain America, Xavier and the remaining X-Men freed them and exposed the Empire’s dark schemes. [Captain America (1st series) #174-175]

When the Kree/Skrull war ended, Reed Richards assembled a group of powerful individuals, 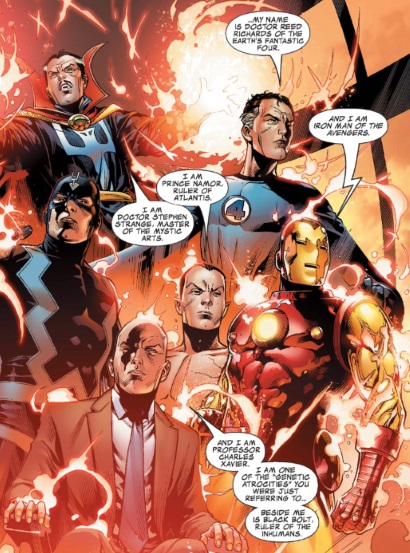 including Charles, to discuss the events. Reed felt that, had the men worked together instead of individually, they could have stopped the war before it even happened. The group, later dubbed the “Illuminati,” vowed to use their power and influence to prevent catastrophic events like that from happening in the future. Keeping the team’s existence a secret from the rest of their allies, they set off on their first mission to the Skrull homeworld. There they gave the ruler of the shape-shifting race a warning that it would be unwise to try and attack Earth again. However, the team were captured and imprisoned, allowing the Skrulls to obtain invaluable information about the men and their powers. Eventually, Xavier and the team escaped but were oblivious to the fact they had started a chain of events that would have dire consequences for their planet in the years to come. [New Avengers: Illuminati #1]

When Cerebro registered a powerful mutant signature on the island Krakoa, Xavier sent the X-Men to investigate, unaware that the island itself was the mutant. As all but Cyclops were abducted by Krakoa, Xavier was forced to gather a new team for a rescue mission. Moira 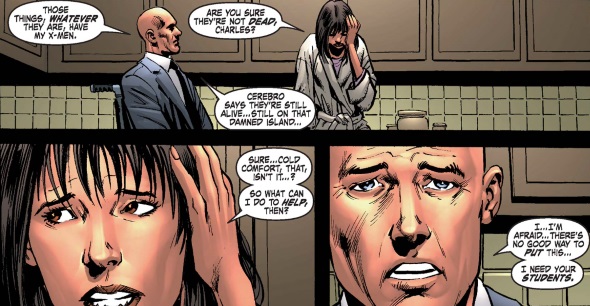 MacTaggert had recently come across bunch of young mutants in need of help and Charles was helping them harness their gifts. He begged her to let them help him and she reluctantly agreed. Using his telepathy, Charles gave them extensive combat training in a matter of hours and then sent them off to fight Krakoa. Unfortunately, they were not prepared for what awaited them and they were all seemingly killed, including Cyclops and Havok’s secret brother Gabriel. Devastated by the loss, Charles decided to cover his tracks and erased Cyclops and Moira’s minds of ever knowing the children.

However, his original team still needed saving and so he set about recruiting a new group, which included some mutants he had previously met. Xavier had need of a more skilled mutant on the team and though Cerebra  discovered a man named Wolverine fighting the Wendigo and the Hulk. Impressed by the man’s ferocity, Xavier invited him to the X-Mansion where Wolverine suddenly attacked Xavier and attempted to kill him. Xavier stopped Wolverine with his telepathy and revealed he knew the man had been brainwashed into killing him. He saw that Wolverine’s mind had been ripped apart and reassembled again and again and so he offered the man a chance for things to change. Whilst his offer appeared to be altruistic, Xavier really just wanted the weaponized man on his side. Wolverine agreed and Xavier used his powers to deconstruct his mind and piece it back together but without the brainwashing. Xavier kept the details of their first meeting a secret from everyone else, even going as far as to block it from Wolverine’s mind.

With the new team assembled, they managed to do what the first team couldn’t do and save the X-Men. After their first adventure together, most of the old team, except for Cyclops, saw this as 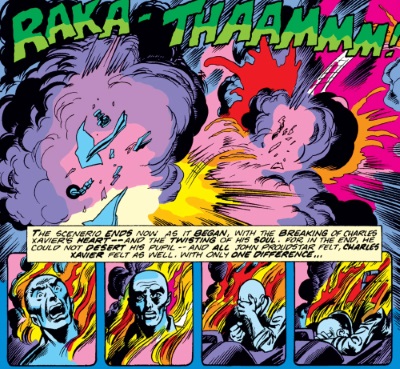 an opportunity to explore lives of their own. Xavier felt a bit betrayed by his original students, but then agreed that they had to start building their own lives and let them move on, instead focusing on the next generation of X-Men. However, he soon after had to live with the horror of having sent another X-Man - Thunderbird - to his death. The arrogant youth was too eager to prove himself in battle and got himself killed in Count Nefaria’s exploding plane. Being in a psi-link with Thunderbird, Xavier literally shared his experience. [Giant Size X-Men #1, X-Men Deadly Genesis #1-6, Original Sin crossover, X-Men (1st series) #94-95]