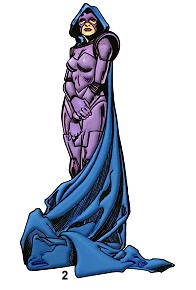 1) When Revanche first appeared, she wore a daringly cut, dark purplish skintight outfit that left both her legs and her sides free. In addition, she wore long, thigh-high boots of the same color and a skull-cap-mask, covering almost her entire head, thus concealing her identity. Strapped onto her back were two katanas. [X-Men (2nd series) #17]

2) When Revanche confronted the X-Men and Psylocke, she deliberately confused them by wearing a simulacrum of the costume Psylocke wore during the time the X-Men were based in the Australian outback – the body armor with the hooded cape and the face mask, though it was colored slightly different. Revanche’s version was completely lavender instead of the original armor’s varying shades of purple and pink, and the hooded cape was colored light blue. [X-Men (2nd series) #20]

3) Finally, during the time she was working with the X-Men, Revanche wore a toned down outfit of her first one, still dark purple, with magenta showing at the sides and legs, a metallic utility belt, metallic bootstraps and no face mask. Shortly before her death, Revanche slightly modified the outfit once more, replacing the purple-colored sleeves with magenta ones. It’s this final version that is displayed here. [X-Men (2nd series) #21]

-) After being resurrected by the Sisterhood, Revanche was wearing another slightly different colored version of the body armor outfit. The hooded cape was now the same lavender color that the rest of the costume was. [Uncanny X-Men (1st series) #510]

4) Assisting the X-Men during their last days, Kwannon wore the dark purple ninja assassin costume, with pink sash around her waist, a hood which she often had pulled over her head, and a mask that covered her mouth and nose. Sometimes she also wore a long purple cape. [Uncanny X-Men (5th series) #16]

5) On Krakoa, after taking the name “Psylocke” Kwannon began to wear a dark version of the classic ninja costume frequently worn by Betsy Braddock, with matching bands across her legs and arms, and a red sash. [Fallen Angels (2nd series) #1]