Little is known of the origins of the mysterious woman called Kwannon. Indeed, even Kwannon is possibly not her real name, as it seems she was given the name as a young girl, after the Japanese goddess of mercy. Kwannon was raised on one of the islands of Japan, where at a young age she was trained by an elderly woman as an assassin. The old woman had personal philosophy that civilization was a lie, which formed a sort of weakness on which the world was built. The woman trained young Kwannon to be a weapon against all lies and told her that she would one day leave Japan to achieve balance in the world by becoming the enemy of peace.

Some years later, still a young woman, Kwannon fell in love with another boy. When the old woman learned of this, she killed the boy but allowed Kwannon to have the child. However, once

born, Kwannon’s daughter was taken from her as a lesson. Love is weakness, she was told. The old woman did offer some hope, however. They marked the infant with the symbol of a butterfly. If the fates were kind, the old woman said, Kwannon would find her again. [Fallen Angels (2nd series) #1] At some point, Kwannon killed her mentor after years of aggressive oppression. [Fallen Angels (2nd series) #5]

Gifted with empathic and low level telepathic abilities, Kwannon became the elite assassin of Japanese crimelord Nyoirin after years of ninja training. While Nyorin harbored feelings for Kwannon, she eventually fell in love with Matsu’o Tsurayaba, who happened to be an assassin for the Hand, a rivaling organization. Kwannon and Matsu’o feared the day their line of work would put them on opposing sides but, respecting each other as warriors with honor, they vowed to fight to the death should they ever be forced to directly fight each other. Eventually, that day came when Matsu’o was ordered to kill Nyoirin, which Kwannon as his bodyguard tried to prevent. During the battle, she fell off a cliff and nearly drowned. While her body survived the fall, Kwannon’s mind was damaged. Seeing his lover mortally injured, Matsu’o abandoned his mission and retrieved his lover to bring her to the Hand’s labs. [X-Men (2nd series) #31]

When the X-Man known as Psylocke, aka Betsy Braddock, washed ashore on one of the Hand’s islands, naked and amnesiac after emerging from the Siege Perilous, Matsu’o saw a chance to restore his incapacitated lover. He proposed his idea to the Mandarin, which was to transfer the mind of Kwannon into the apparently empty shell of Psylocke. 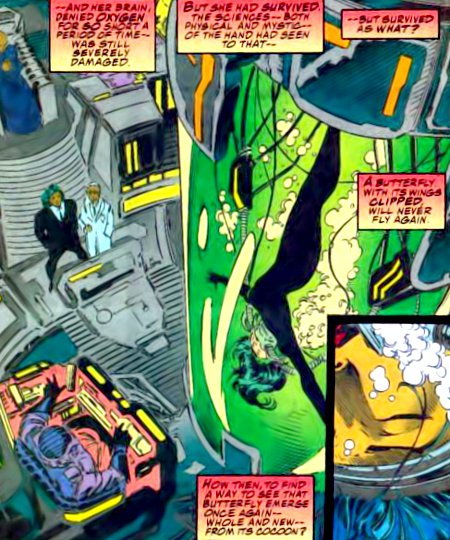 The Hand’s psi-sensitives were sure that, because of her own limited mental powers, Kwannon’s mind would be able to withstand the transfer but her injured physical form served a problem. Therefore, Matsu‘o contacted Spiral at the Body Shoppe for help. To please her employer, Mojo, Spiral twisted the two women further than she was asked. Besides switching their minds, she manipulated genetic coding between them. Both women now had traits of Kwannon and Betsy, and it was nearly impossible to tell them apart. Apparently, though, most of Kwannon’s soul was transferred into the British woman’s body while the major part of Betsy‘s mind was in the Japanese woman's body. Thanks to some supernatural confusion cast by Spiral, Matsu’o initially believed Kwannon was alive in her own body, and left with her to make her join the Hand.

To cause further anguish, Spiral hinted to Lord Nyoirin that the soul of his former prime assassin, who never returned his affections, was now trapped inside the 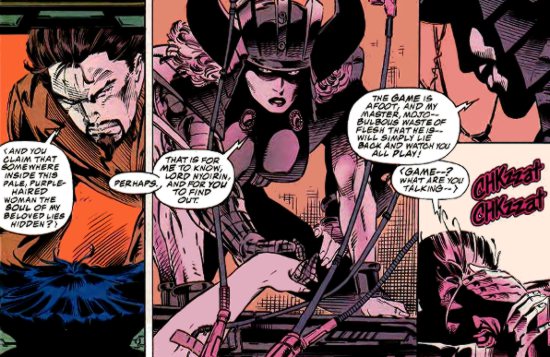 Caucasian body and she handed her over to him. Spiral’s tampering of minds had somewhat healed, though not fully restored Kwannon’s mind; she was essentially a blank slate. Nyoirin helped her cope with the new body but, at the same time, used her amnesia to feed her lies and make her truly his own. [X-Men (2nd series) #32]

Spiral foresaw that neither women remembered the actual procedure, which is why Nyoirin had to come up with another explanation for what happened. He kept a fake diary, in which he claimed that when the amnesiac Psylocke emerged from the Siege Perilous she was found by Kwannon. According to Nyorin, Betsy had accidentally fused their minds together in her confused state and “Kwannon“ (the Asian body) ran off 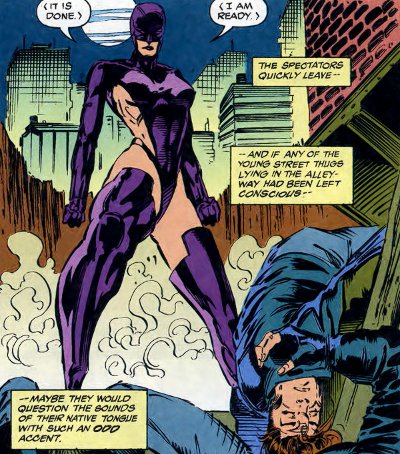 with enough knowledge about the X-Men to infiltrate them, while she herself was nursed back to health by Nyoirin in Japan. Because of Nyorin’s lie, Kwannon believed herself to be the one true Betsy Braddock and the Asian Psylocke, among the X-Men, an imposter. [X-Men (2nd series) #22]

After some time of healing and re-establishing her former position as Nyoirin's master assassin, “Betsy“ decided it was time to face the X-Men and Psylocke. She adopted the codename Revanche and traveled to New York to reveal the “imposter“ in the X-Men’s midst. She managed to get into the mansion unseen and attacked Psylocke in the Danger Room, interrupting an argument she had with Jean Grey. Revanche's mastery of their shared telepathic powers was such that she could create a full psychic katana, while Psylocke could only generate a meager psi-knife. 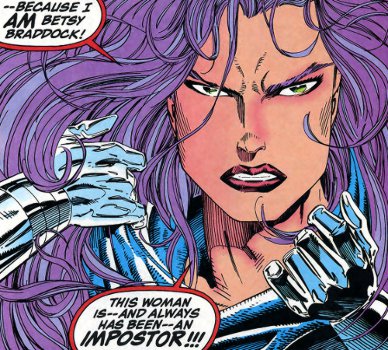 When the other X-Men came to Psylocke’s aid, Revanche pulled off her mask, revealing her face and claiming that she was the true Betsy Braddock. Since neither Wolverine’s enhanced senses nor Xavier’s telepathy could tell which one was the real Betsy, the X-Men traveled to Japan, but from Nyoirin and the Hand they only got conflicting stories and half-truths. The false tale of Nyorin's diary was retold for the X-Men, leaving Psylocke, Revanche and their allies in a state of confusion. [X-Men (2nd series) #20-22] (After Revanche's death, the truth came out that Kwannon was subconsciously manipulating those around her, projecting her feelings of rage and abandonment telepathically such that the X-Men were kept off-balance and unable to rationally weigh and consider all they were being told.) [X-Men (2nd series) #32] 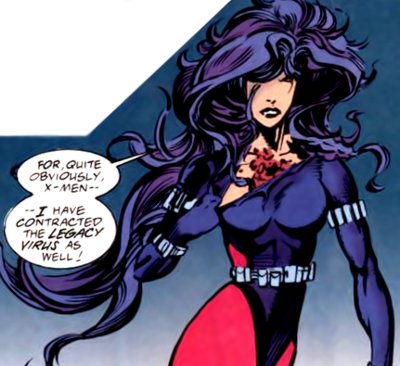 Revanche stayed with the X-Men and even managed to get along with her “twin” Psylocke for the time being, hoping that they’d soon find a way to confirm their true identities. Around the same time, the X-Men discovered a “clinic” for Legacy victims led by Empyrean, a mutant who fed on the energies of his patients. The team wanted to shut down the clinic but Revanche ordered a retreat, stating that the patients were there willingly and had to decide for themselves whether they wanted to be exploited or not. When asked why she felt so strongly about the issue, Revanche revealed that she too had contracted the Legacy virus. [X-Men Annual (2nd series) #2]

In the following weeks, Xavier and the Beast tried their best to slow down it’s effect but with only limited success. As the disease was spreading, Revanche refused to die in a lab as a guinea pig; instead she chose to deal with her past as long as she was still able to.

With the virus flaring up her telepathic powers, Kwannon could finally see clear through the fog in her own mind and realized that, beneath the lies and manipulations, she was only Betsy Braddock in body but her mind and soul were Kwannon. She decided not to be manipulated anymore, starting with cutting out the camera-eye implants Mojo had implanted in her body. (Years ago, Psylocke had received the bionic eyes after having been blinded by an opponent.) For a telepath, it did not matter as greatly to be blind, as she could see her surroundings by looking though the eyes of the people around her. 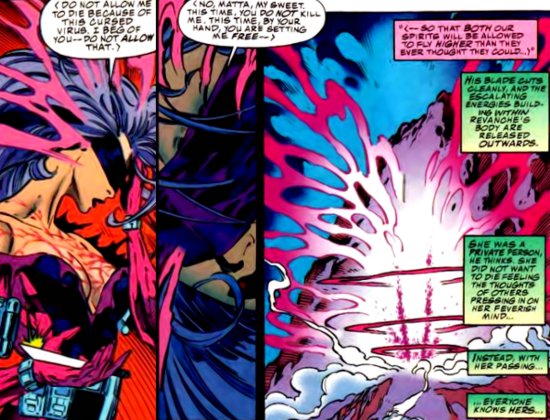 Leaving the implants in Xavier’s mansion, Kwannon traveled to Japan to confront Nyoirin about what he had done to her, yet she found him dead - killed by Matsu‘o, for causing all of them so much misery. She then made up with her old lover and asked him to kill her, not wanting to die of the Legacy virus, as she felt her end was coming. In order to spare his lover a dishonorable death, Matsu’o did as asked. He rammed a blade into her heart and, upon dying, Revanche released a wave of escalating telepathic energies, leaving him with an imprint of her.

Half a world away, Psylocke felt her “twin“ dying and sought out Matsu’o, who then used this telepathic imprint in the way Revanche had asked of him. Matsu’o released the energy on Betsy and her mental peace was restored too, as all fragments of Kwannon were taken from her soul, restoring her true sense of identity. [X-Men (2nd series) #31-32]