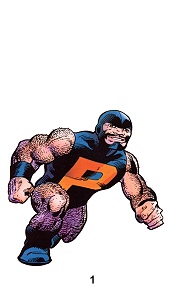 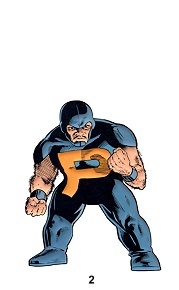 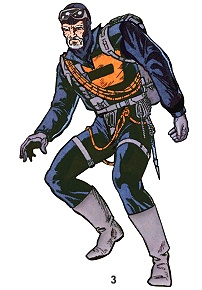 1/2) Puck's first costume was a jet-black bodysuit with no sleeves or leggings, depicting a giant orange letter 'P' on his chest. He wore small black boots and wristbands, as well as a black skullcap which covered everything but his face. [Alpha Flight (1st series) #1] He would later wear slightly different versions of this costume with fully covered legs, and fully covered arms or short sleeves. [Alpha Flight (1st series) #12, 23]

3) After being restored to his normal age and size, Puck adopted a plain clothes version of his super-hero costume. His apparel included jet-black pants, undershirt and a padded jacket with a sharp collar. He also wore a black headpiece covering all but his face. In addition, he wore gray boots and gloves, and had a wide variety of tools and paraphernalia attached to him, including a utility belt with climbing rope and hooks, a knapsack on his back, protective goggles and a row of pouches running up the right side of his chest. [Alpha Flight (1st series) #59] 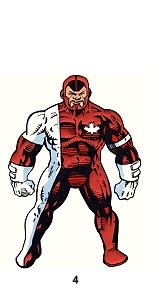 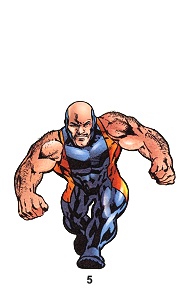 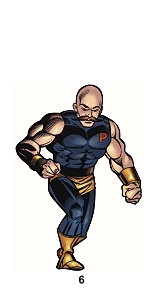 4) After becoming a dwarf again, Puck returned to his original costume but, when Alpha Flight came back under Department H's command, they soon adopted team costumes as a show of unity. Puck's was in the same basic design as his original full body suit, with everything except his face completely covered. Though predominantly red in color, the right side of the costume was white, separated by a line straight down between his head and right shoulder. He wore white gloves and a white band around his left forearm, and his right arm was red between his glove and short white sleeve. He also had a white maple leaf imprinted on his left breast. [Alpha Flight (1st series) #104]

5) Upon being inducted into the revamped Alpha Flight, Puck adopted a new costume along with the rest of the team. It was predominantly blue, covering all his legs and body but with no sleeves. The only other color on the suit was orange, in two areas on either side of his body, under his arms and ending shortly down his thighs. Instead of a skullcap, a minor headpiece extended up the back of his skull to his relative hairline, leaving his face and the top of his head exposed. [Alpha Flight (2nd series) #1]

6) Puck's next costume resembled a circus strongman's appearance - it was a dark blue uniform with no sleeves or head gear, outfitted with either brown or blue trunks, belt, boots and wristbands. Some versions of this outfit display a small red letter ‘P‘ on the right side of his chest. [Wolverine (2nd series) #171, Uncanny X-Men #421]

-) Eventually though, Judd would go back to his original costume. [Alpha Flight (2nd series) #2]