COSTUME GALLERY
(click on the images to see a larger version) 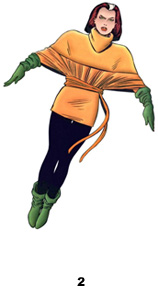 1) Rogue’s first costume was a green suit including a hood, thus nearly covering her entire body, fearing she would accidentally absorb another person. However, the gloves could be easily removed, in case she wanted to use her talent on an opponent. The original version had a dark green outline, though it was later colored white. [Avengers Annual #10]

2) After returning from the Secret Wars, Rogue tried out another look with this brown tunic, though apparently she was not happy with the color. [Uncanny X-Men (1st series) #182]

3) Soon after, she returned to a green outfit, this one being a overall like worn by mechanics, with a black bodice or jumpsuit underneath. [Uncanny X-Men (1st series) #187]

4) Still trying to find a suiting costume, Rogue began to constantly change her outfit. Basically, she was wearing a black bodysuit, combined with several different green elements. She was seen wearing shirts of different sizes, belts, boots, gloves, a thong, a mini skirt and a leather jacket on one occasion or another. At the same time, she started to let her hair grow out. [Uncanny X-Men (1st series) #193-227] 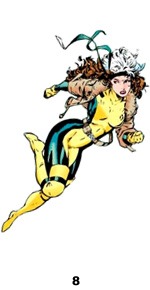 5) When the X-Men relocated to Australia, Rogue finally settled on one look. It was still the black bodysuit but most of it covered by a one-piece bathing suit, overknee boots and long sleeves, all colored green. [Uncanny X-Men (1st series) #229]

6) During a time the Carol Danvers personality had taken control of their body, she made Rogue wear her Ms. Marvel costume. When Rogue again gained dominance, in the middle of a battle, she was less than happy with the costume, finding it unacceptable. [Uncanny X-Men (1st series) #246]

7) When Rogue and most of the residents of Muir Island were mentally possessed by the Shadow King, she was seen wearing several different outfits. One was her costume from the Australia days, another an entirely green outfit with a pale yellow chest area and long cape. The outfit presented here was the one she wore performing in an arena. It’s a dark blue bodysuit with a yellow vest, gloves and boots worn over it. There was also another look, quite similar to this, consisting of a gray bodysuit and blue attributes. [Uncanny X-Men (1st series) #278-280]

8) Back with the X-Men, Rogue, like most of the others, received a new costume. The green and yellow suit, along with the leather jacket, became Rogue’s trademark look for many years. It’s the one she wore for the longest time period. [X-Men (2nd series) #1] 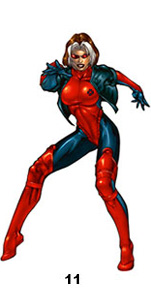 9) For a time, the X-Men were abducted to space to help battle an alien invasion. They had nothing to wear but the Shi’ar uniforms aboard their vessel. To her surprise, Rogue’s costume was a mining suit, designed with a special low grade force field surrounding its wearer. This allowed her to apparently touch other people, though the very thin shield kept her from actually making contact. Rogue took the suit with her back to Earth. [Uncanny X-Men (1st series) #342]

-) For a time, Rogue altered between the Shi’ar mining suit and her original, hooded, green uniform. Wolverine asked her about the reasons for the change but Rogue remained very cryptic. [Uncanny X-Men (1st series) #356]

10) In the following months, the X-Men adopted some sort of team look. Just like the others’ costumes, Rogue’s too had a big X across the chest area and was in her familiar green and yellow color scheme. Similar to the suit worn by new teammate, Thunderbird, it also had a metallic neck area. Sometimes, Rogue wore her leather jacket over this outfit again. [X-Men (2nd series) #100]

11) After the X-Treme X-Men left the mansion, they came up with a set of new costumes, mainly in red and black. Like the rest of his team, Rogue has a set of red sunglasses with special properties – they function as the group’s communication and scanning device. However, Rogue’s glasses had an extra purpose; at the time, she was randomly manifesting abilities absorbed in the past and she feared to injure others with Cyclops’ uncontrollable optic beam. [X-Treme X-Men (1st series) #1]

12) When Rogue and Gambit helped out the X-Men against Elias Bogan, she wore some leather clothes that were more like a biking outfit rather than a superhero costume. She wore black leather pants which came just until her knees and had a stripes pattern on them. On top of halterless top she wore a sleeveless leather with shoulder patches, leaving her arms bare so that her arm tattoo could be shown. Short leather gloves, boots and a belt with a small “X” symbol completed the look. [X-Treme X-Men (1st series) #33]

13) Coming back to Xavier’s mansion in Westchester, Rogue returned to using her old yellow and green uniform. However unlike the short leather jacket she wore on top of it in the past, she is now wearing a black leather trench-coat, similar to Gambit’s brown one, on top of it. However, while teaching her student squad in Danger Room sessions, Rogue was seen wearing a sleeveless version of the X-Men’s standard blue and gold training costume. [X-Men (2nd series) #157, Uncanny X-Men (1st series) #444]

14) After Gambit left the X-Men, Rogue dressed in a style that reflected her original outfit. She wore a dark green bodysuit with white trimming and a hooded cloak of similar colors. She topped it off with dark green boots and long opera gloves. [X-Men (2nd series) #188]

15) When Rogue took over counseling duties on Utopia, she dressed in a less intimidating manner than before. She wore a long, green top that acted as a miniskirt, which zipped up at the front. The trimming was white and it also had giant white X’s in a circles on her shoulders and chest. She also wore a pair of green leggings and dark green knee-length boots. As she had control over her powers, her top was sleeveless but she still wore green opera gloves. She finished it all with a thin, white scarf and a white belt with pouches and an X-buckle on it. [X-Men Legacy Annual #1]

16) After Xavier’s death, Rogue adopted a uniform that looked very similar to her original Brotherhood one. It consisted on a green, hooded top with white trimming, which zipped up the front. She wore green leggings and green thigh-high boots. She sometimes wore a white belt with it too. [Uncanny Avengers (1st series) #1]

17) When Rogue led the second iteration of the Unity Squad she altered her look slightly. Keeping the general design of her previous Unity Squad look she themed it similar to her Utopia counsellor look, only she showed much less flesh. [Uncanny Avengers (2nd series) #1]