The world was becoming smaller and smaller, however, even in the Savage Land. A magazine article on the Savage Land included a photo of Lykos with Ka-Zar and the Fall People. The article found its way into the hands of Tanya Anderssen, who learned for the first time that Karl Lykos was still alive. Seeking to reunite with him at any cost, Tanya pressured Warren Worthington III into helping her fund an expedition to the Savage Land. Her expedition ended up getting Angel and their photographer Peter Parker captured by the Savage Land Mutates and turned into grotesque creatures by Brainchild's modified mutant energy accelerator. Tanya was also captured and mutated by the machine, leading Lykos to an uncomfortable realization. The energies being used by the accelerator were similar to the bio-energy he absorbed with his powers. Odds were that 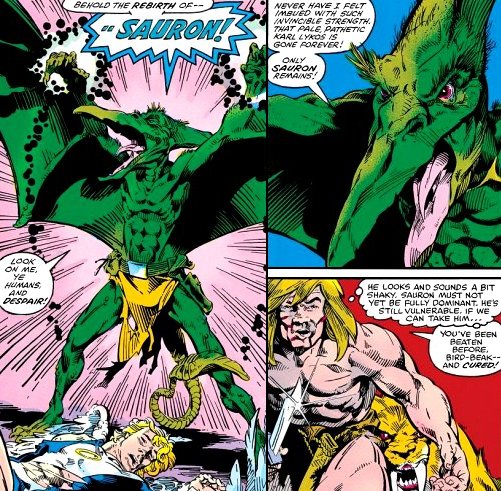 Lykos could reverse the transformations suffered by the others, but would almost certainly become Sauron again in the process. With Tanya's fate in mind, Karl submitted to his addiction, curing Tanya, Angel and Parker, while indeed becoming Sauron once more. Sauron flew off into the jungles as Ka-Zar, Tanya and their allies regrouped. [Marvel Fanfare (1st series) #1-2]

Sauron found new allies in the Savage Land, uniting with the Mutates as well as Zaladane and her army of Sun People. While Ka-Zar was voyaging in Pangea and Angel returned to the United Nations outpost to seek help from the X-Men, Sauron and his forces conquered much of the Savage Land, killing many of the Fall People. They established a strategic citadel on an island in one of the large lakes, protected by aquatic predators that Sauron and his pterodactyl air force could easily avoid. Sauron began using the mutant energy accelerator to sustain himself, devolving his captives and then absorbing the accelerator's energy from each subject, supercharging himself while reverting his captives, only to subject them to the process over and over again. Tanya and Shanna the She-Devil were among his earliest prisoners. 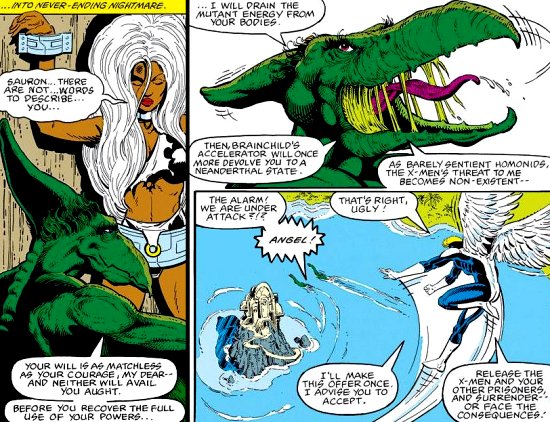 When the X-Men arrived in the Savage Land, they seemingly overpowered the Savage Land Mutates on patrol and Amphibius led them to the citadel. However, the heroes were unaware that Sauron had rigged a will-sapping field around the citadel that turned his own hypnotic abilities into mental inhibitor waves, rendering anyone nearby mentally weak and easy to overcome. The X-Men became his prisoners, providing even greater mutant energies for him to sup upon. Only Angel escaped the effects of the field and he sought help from Ka-Zar. Angel, Ka-Zar and Zabu infiltrated the citadel when Sauron was distracted and destroyed the accelerator while freeing the X-Men. Tired from dog-fighting with Angel during his distraction, Sauron was soon overwhelmed by the remaining X-Men and reverted back to Karl Lykos. 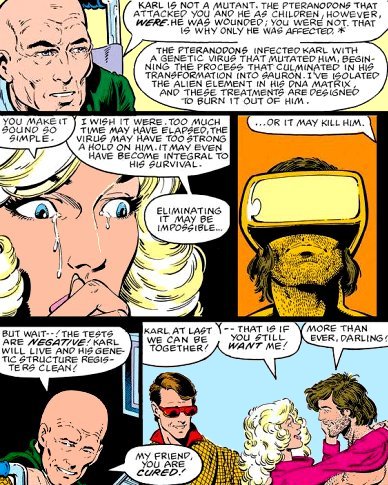 Meanwhile, Charles Xavier had been working on a way to cure Lykos from his affliction permanently. After identifying the genetic virus Karl was infected with years ago by the mutant pteranodons, Xavier created a treatment that would isolate those foreign DNA markers and eliminate them from Lykos' system. After several treatments back in Westchester, Xavier pronounced Karl completely cured of his need for life energy and his Sauron persona. Karl and Tanya were overjoyed by the news and planned to begin their life together, free from any outside disruptions to their happiness. [Marvel Fanfare (1st series) #3-4]

The couple did receive a few brief years of happiness, but that was all. One day, Karl returned to their Manhattan apartment to find Tanya a captive of the evil mutants Blob and Toad. The Brotherhood of Evil Mutants wanted Sauron for their new organization, and they wouldn't take no for an answer. Using technology he had presumably cultivated over the years from the Stranger and Magneto, Toad found a way to reverse Xavier's cure. Strapped into Toad's machine, Karl Lykos was forced to drain Tanya dry of her life-energies, killing his one true love and catalyzing the transformation back into Sauron. [X-Force (1st series) #5] 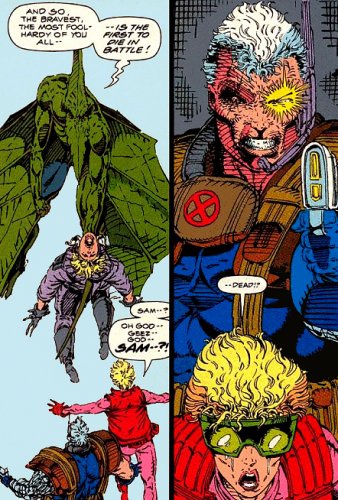 Sauron and the Brotherhood of Evil Mutants sought an alliance with the Morlocks. To secure that alliance, they agreed to eliminate Cable and X-Force, who had recently opposed the Morlocks' leader, Masque. In a sneak attack on X-Force's Adirondack Mountain base, Sauron, Blob and Pyro engaged several members of the team outdoors, while the others moved into the base itself. Sauron soon followed inside and confronted Cannonball, whose mutant blast field had been disrupted by the Brotherhood's Phantazia. Cannonball's invulnerability failed him and Sauron impaled the young mutant on his wing-talons, ripping Guthrie's entrails out. [X-Force (1st series) #6-8]

Sauron's victory was short-lived. He suffered serious injuries fighting Feral before Cable blew out the front of his chest with a series of explosive rounds. Sauron and Masque were both left dead at the end of the fight and, unbeknownst to Sauron, Cannonball miraculously survived his skewering as well. In a show of intimidation, Cable and X-Force brought the bodies of their foes back to the Morlock Tunnels, literally throwing them back in the Morlocks' faces as a warning not to mess with X-Force any further. [X-Force (1st series) #9-11]

The Morlocks apparently flushed Sauron's body, because he wound up floating in the East River. The Pterodactyl Man wasn't dead, however, but merely sleeping. Instead of reverting to Lykos when de-energized, Sauron entered a death-like regenerative stasis. When a drunken hobo tripped on the docks and fell into the water, his life-energy was absorbed by the passing Sauron, restoring him to life. As he emerged from the river, Sauron overheard customs authorities worried about a group of Genoshan Mutate expatriates seeking asylum and he saw an opportunity for the Brotherhood. 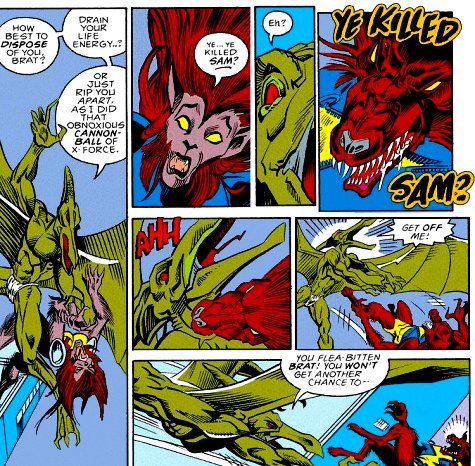 Rallying the Evil Mutants, Sauron and the Brotherhood overpowered the customs and armed forces assembled around these "X-Patriots" and their vessel. Before they could coerce the Mutates into an alliance, however, the government-sponsored X-Factor team arrived. During a fight with Wolfsbane, Sauron bragged about his recent disemboweling of Cannonball, unaware of his survival. Remarkably bad idea. The somewhat unstable Wolfsbane went completely feral in rage and nearly tore out Sauron's throat before he desperately threw her away to make his escape. [X-Factor (1st series) #82]

In their next endeavor, the Brotherhood decided to acquire the teleporter known as Portal for easy comings and goings on their missions. Sauron used his hypnotic gaze to place Portal under his spell, but the Brotherhood didn't count on Portal's strong will and the many other superhumans who were interested in Portal at the time, including Spider-Man, Darkhawk and Sleepwalker. After several attempts to keep Portal under their sway, the Brotherhood gave up and abandoned him to the heroes, rather than risk further combat. [Darkhawk #19-20, Sleepwalker #17]

Sauron apparently grew tired of his alliance with the Brotherhood and returned to the Savage Land for another attempt to rule. He forced several Savage Land Mutates to submit to his leadership and gathered a small army of barbarian worshippers. The X-Men Wolverine and Rogue had come to the Savage Land to look for clues regarding Magneto's recent return and stumbled into Sauron's plans for conquest. Wolverine battled Sauron at the ceremonial circle of fire and was strong enough not only to overcome the winged warrior but survive a stampede of dinosaurs as well. With the reluctant help of Brainchild, the X-Men planned to subject Sauron to a modified version of the old mutant energy accelerator and revert him back to Lykos, but Sauron pleaded for them to stop. He argued that Lykos and Sauron were two different beings, and restoring Lykos was the same as killing Sauron. He also claimed the X-Men had no right to force their ideas of civilization on the Savage Land and the jungle had its own laws to be enforced. Wolverine relented and set Sauron free as the X-Men returned to their original mission. [Wolverine (2nd series) #69-71]

Of course, Sauron had been using his hypnotic powers on the X-Men at the time in order to ensure their cooperation, and went back to trying to conquer the Savage Land once they left. However, Sauron's mind began to crumble as he suffered from the guilt of causing Tanya's death and paranoia that his Lykos personality would resurface after being suppressed for so long. He browbeat more of the Savage Land Mutates into serving him, raiding nearby villages to gather more victims for him to drain, but even the Mutates realized Sauron was losing it. 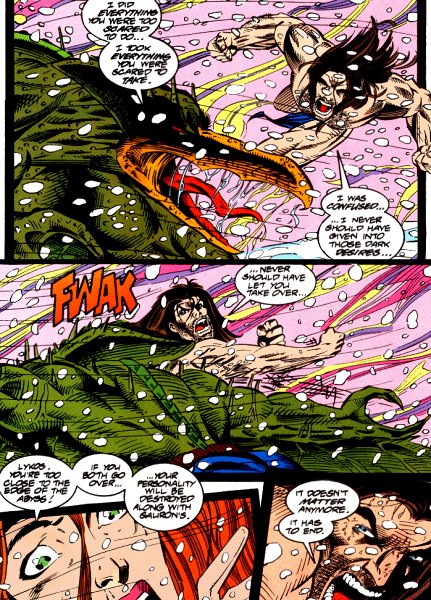 Sauron drew unwanted attention when he sent Worm and Whiteout to the outside world to capture Havok, the first mutant he ever supped on, in the hopes of regaining his past glory. Havok was followed by Polaris, Cyclops and Jean Grey, but they were soon captured and both the Summers brothers were placed in Brainchild's machine to feed Sauron's appetites. Although the X-Men got free, Sauron was super-charged by the procedure and grew to more than twice his original size and strength.

Jean Grey attempted a new tactic against Sauron by telepathically entering his mind and trying to reach Karl Lykos' personality. Lykos appeared as a physically and psychologically weakened avatar in Sauron's mindscape, but Jean pressed him into trying to reassert his dominance. Lykos and Sauron grappled with one another near a figurative abyss and Lykos chose to toss both of them over the side, burying their conscious minds in a form of psychic suicide. As Jean exited Sauron's mind, the Pterodactyl Man awakened with only a simple, bestial mind. His dreams of conquest gone, Sauron blithely took to the air in an effort to join the natural pteranodons of the Savage Land as they flew by. [X-Men Unlimited (1st series) #6]

Over time, Sauron's mind ever-so-slowly returned to him. His limited intelligence grasped that he had once been more than what he was, but he couldn't quite fathom what that was from the "pictures in his head." He encountered Ka-Zar and Shanna the She-Devil at the site of some ancient evolutionary machinery, and tried to force them into using the machines to turn him back into what he used to be. His efforts failed and the mysterious technology was destroyed. [Ka-Zar of the Savage Land #1]

Nevertheless, enough shook loose in Sauron's mind to begin restoring his former self. He reverted back to Karl Lykos for the first time since Tanya's death and saw the opportunity to escape the Savage Land when the Plunders left for New York. Sauron snuck aboard their luggage and made his way to freedom in New York City. [Uncanny X-Men (1st series) #351] 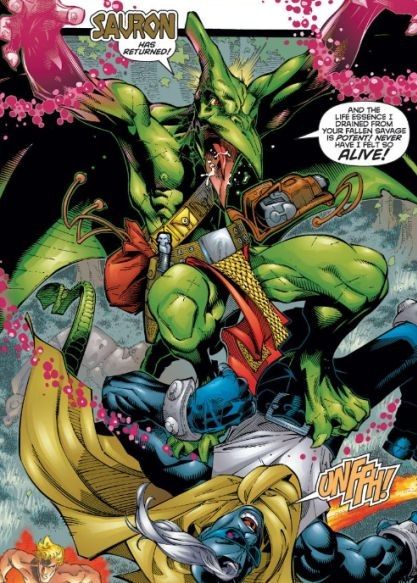 After feeding on the homeless for some time, Lykos got the whiff of mutant energy upstate, and followed the trail until he located the Xavier mansion in Westchester. Seizing an opportunity, he attacked Wolverine from behind and fully completed his transformation back into Sauron. Lykos fought the X-Men near Breakstone Lake and held his own against a half-dozen mutants, but they eventually overpowered Sauron and knocked him unconscious. [Uncanny X-Men (1st series) #353-354]

Wolverine trussed Sauron up in a chain-locked burlap sack before preparing to turn him over to the authorities in town. This led into a comedy of errors where Alpha Flight was manipulated into attacking Wolverine while he was alone, towing Sauron to town on the back of his motorcycle. As a fight broke out between the X-Men and the Flight, Sauron tried to hop away inside his sack, only to be picked up by Sasquatch and used as a bludgeon to pummel his foes. [Uncanny X-Men (1st series) #355, Alpha Flight (2nd series) #9] The dazed Lykos was eventually recovered after the fight ended and was turned over to G.W. Bridge and S.H.I.E.L.D. for detention. [Uncanny X-Men (1st series) #356]