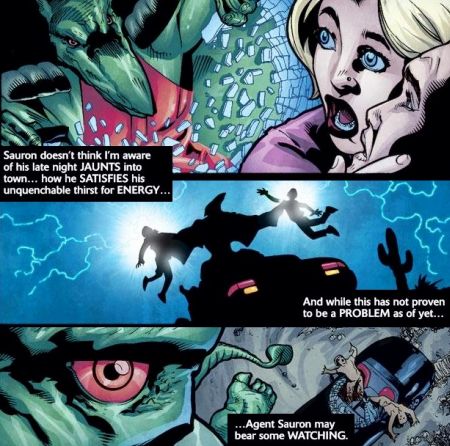 Seeking to improve his powers, Sauron allied himself with the Weapon X Program for augmentation. Their success was... arguable. On the one hand, Sauron gained the ability to absorb and redirect other kinds of energies beyond lifeforce, including kinetic and electromagnetic. On the other hand, he seemingly lost his hypnotic powers and most of his intelligence at first, possibly as part of an attempt to separate the Sauron personality from Lykos. Sauron's appetite for life energies was not abated at all and he used his new "nest" at the Weapon X Facility as a base camp to strike out from, draining hapless civilians to feed his desires. [Deadpool (2nd series) #58-60, Weapon X: The Draft - Sauron #1, Weapon X #1/2] 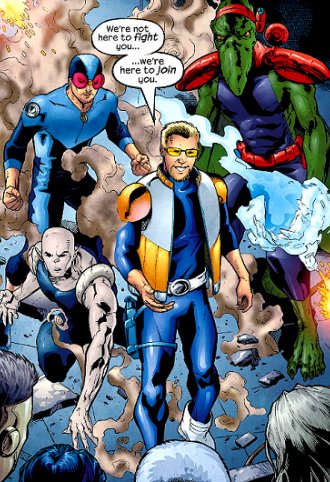 Sauron's intelligence eventually stabilized, restoring his cunning. However, while the Director turned a blind eye to Sauron's feeding habits, his second-in-command Brent Jackson used the fact that Sauron's secret feedings weren't officially sanctioned to get the Pterodactyl Man under his thumb. Claiming the Director would eventually find out about Sauron's activities and stop them, Jackson recruited Sauron as an ally for the coup he was planning against the Director. [Weapon X (2nd series) #1-3] They also secured the assistance of Wild Child, Marrow and Washout. [Weapon X (2nd series) #7] Jackson made the bold move of aligning his mutineers with Cable and the Underground, the active resistance movement against the Weapon X Program. Suspicious but unable to pass up the advantage Jackson offered him, Cable infiltrated the Program alongside Sauron and the others. They fought against the Director's loyalists, soldiers and Boxbot androids, until the Director was driven from the compound and Jackson lay claim to the entire program himself. Cable's people were brainwashed into believing Weapon X was shut down and, with the tacit approval of Weapon X's oversight council, Jackson, Sauron and Wild Child became the new leaders of the Weapon X Program. [Weapon X (2nd series) #9-13]

With the full resources of the Weapon X Program at his disposal, Lykos created a peace between himself and Sauron. He demonstrated the ability to transform seamlessly back and forth at will, without any additional life energy passing through his system, and accessing his full scientific intellect as Sauron. 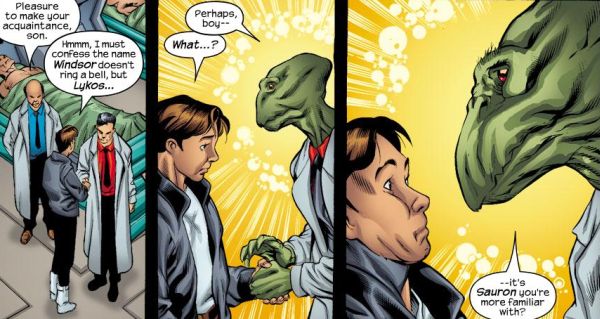 Unfortunately, Weapon X itself became increasingly unstable as the War of the Programs began. The Director started a rival Sentinel manufacturing endeavor to retake control of the program from Jackson. John Sublime and the Weapon Plus Program showed increasing oversight over Weapon X, wanting to seize its assets for themselves and Sublime's U-Men. Mister Sinister was also involved, having infiltrated Weapon X and producing his own gene-spliced Children. Jackson finally took his program underground, leaving behind all known bases of operations. [Weapon X (2nd series) #16-18, Weapon X: Days of Future Now #1] 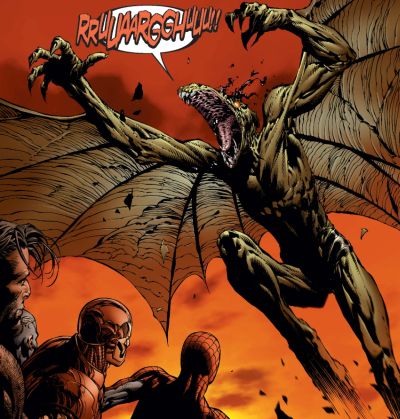 Sauron became an unwitting pawn of larger intrigues than even the Weapon X Program, intrigues being played out among factions of S.H.I.E.L.D., Hydra and the Skrulls infiltrating the planet Earth. After attempting to abandon Weapon X, Sauron was recaptured and imprisoned on the Raft off the coast of Riker's Island as punishment. His old allies, the Savage Land Mutates paid to arrange for his release, although the entire exercise was in actuality being orchestrated by Queen Veranke of the Skrulls to further destabilize the world. Electro was hired through intermediaries to cause a riot at the Raft while securing Sauron's release. Forty-two super-criminals escaped, inadvertently prompting the reformation of the Avengers. Lykos was found in the Savage Land by the Avengers and Wolverine, who managed to recapture him. Sauron was turned over to S.H.I.E.L.D., who indicated Weapon X would reclaim him after that. [New Avengers (1st series) #1-6]

[NOTE: Sauron's involvement in the War of the Programs after this point is unclear. Weapon X: Days of Future Now #1 indicated that he betrayed Jackson to the Director, but those events took place a few weeks into the future of what ultimately became an alternate timeline. The final battle of the War took place on M-Day, as seen in New Excalibur #8, but Sauron did not appear to be present.]

Sauron eventually returned to the Savage Land and reunited with the Mutates. They once considered rejoining Magneto on Asteroid M, after hearing it had risen from the bottom of the ocean, but turned around once they learned Utopia was under the command of the X-Men and Magneto now served under Cyclops. [New Mutants (3rd series) #10] 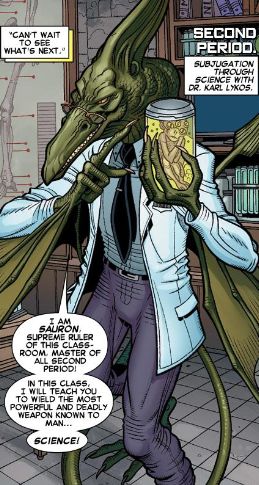 Sauron next became involved in the Hellfire Academy scheme orchestrated by Kade Kilgore and Sabretooth. Set up as a rival institution to the Jean Grey School for Higher Learning, the Academy trained new Hellions to become mutant super-villains, driving up sales for Kilgore and the Hellfire Club's Sentinel production facilities. Sauron participated in the recruitment of several students, such as Mudbug and Glob Herman. [Wolverine and the X-Men (1st series) #20, 28]

As the resident mad science teacher, Sauron taught the Hellions how to use science to dominate their inferiors and transform their allies. He also used a demerits system as an excuse for draining the life energy from his pupils when they broke the rules in class. Several staff and students from the Jean Grey School were pilfered by the Hellfire Academy, drawing the X-Men's attention. In a siege by the X-Men of the Jean Grey School, Sauron and the Academy staff defended their turf but were ultimately defeated by in-fighting and several Hellfire associates jumping ship in the middle of the battle. Sauron was presumably taken into custody. [Wolverine and the X-Men (1st series) #31-35]

Months later, Sauron resurfaced in an alliance with Stegron the Dinosaur Man. Another dinosaur-themed scientist / super-villain, Stegron was capable of controlling dinosaurs and reptile life and designed equipment to reanimate dead dinosaurs, restoring fossilized creatures to life under his control. Combining forces, Sauron shared his own life-energy absorbing powers with Stegron, while improving his technology to convert all flora and fauna into a prehistoric state. Sauron and Stegron ran afoul of Spider-Man and a special class of X-Men students at the Natural History Museum while acquiring samples for their work. The "United Prehistoric Insurgency" captured Spidey and the young heroes and began their work transforming part of Staten Island into a prehistoric jungle as the New Savage Land. [Spider-Man and the X-Men #1] 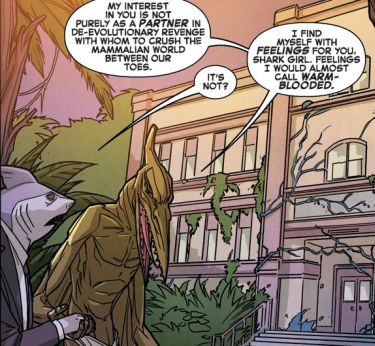 Shark Girl of the students used her Mesozoic origins to fake an interest in Sauron's plan and joined the Insurgency to secretly help her friends. Sauron and Stegron both took a liking to Shark Girl, giving her the opportunity to drive a wedge between them. Before she could, however, the dino-villains tested their transformer on Glob Herman, changing him into a mutant triceratops... of roughly human proportions. Sauron wanted to turn people into BIG dinosaurs and he blamed Stegron for not being more successful in rewriting the laws of God and man.

As Spider-Man and the X-Men students escaped, Sauron went after them and Shark Girl took the opportunity to turn Stegron against his ally. He showed her how to reverse the dinosaur transformation process before Sauron caught them together, and the villains began a battle 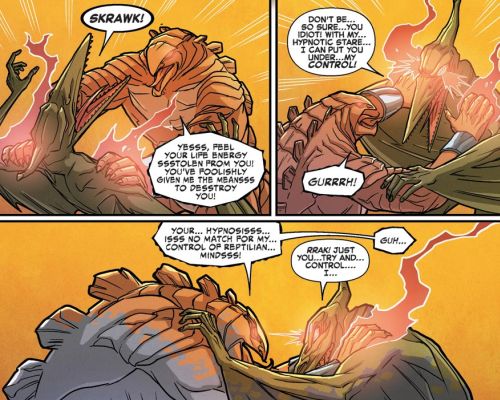 for dominance. Sauron's hypnotic gaze met Stegron's reptile telepathy as both also tried to drain the life-energy from their opponent. Caught in an endless loop, the two villains cancelled each other out and were both rendered inert. [Spider-Man and the X-Men #2]

Not to worry, for Sauron soon resurfaced with a team of Earth's Mightiest Villains: Whirlwind, the Grey Gargoyle, Razorback, Bonebreaker and some guy in a Scorpion suit! They were beaten by a walking tree and a talking raccoon but, oh, they were mighty! [Groot #6]

Nevertheless, Sauron shall return. Do you hear us, you soft, pink, bags of rice paper flesh? Sauron will be back!