The story of the goddess Snowbird begins some thousands of years ago, when seven deadly beings known as the Great Beasts roamed the Earth. The Beasts were imprisoned in their own hellish dimension by the powerful Arctic Gods; however, they in turn were imprisoned in their own paradise-like dimension by the Beasts. The Gods knew that in thousands of years the barriers holding the Great Beasts would grow weak, and they would again be able to roam free over Earth. Therefore, a champion was needed, someone who could walk on Earth and break the barriers of the nether realm, someone whose sole purpose was to defeat the Great Beasts where and whenever they arose. 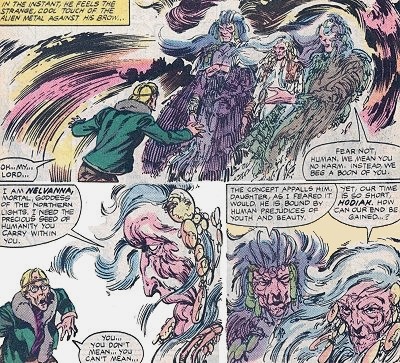 As the time drew nearer, three of the Arctic Gods – Hodiak, Nelvanna and the Shaper – appeared before a man called Richard Easton and took him to their realm where they asked him to mate with Nelvanna to create that champion. However, Easton couldn’t comprehend what was asked of him, and the sight of the elderly female disgusted him. Only after the Shaper altered her form to that of a beautiful blonde female, he more than willingly acted upon the God’s wishes. Afterwards he was sent back to Earth; however while he thought only one night had passed, it was nine years later, and not surprisingly Easton grew quite insane over that realization.

As Nelvanna was about to give birth, she summoned Sacree shaman Dr. Michael Twoyoungmen to a place of power to assist her. Michael had only recently accepted his magical heritage and acted on pure instinct. When he sensed that the embryo’s form was unstable, evidently a sign for it growing up to be a transmorph, the shaman knew that he had to mystically bind it to Earth or else it would have never been able to possess a human form. Little did he know that his binding

spell would have dire consequences for the demigod. When the spell was cast, the birth, if such alien sequence of events can truly called that, was finished and Michael he held in his arms a baby girl – already appearing one year old. [backstory in Alpha Flight (1st series) #7]

Twoyoungmen called the child Narya and she went to live with him in his hermit’s cabin in Banff National Park, where she began to learn the customs of Earth and how to use her fantastic 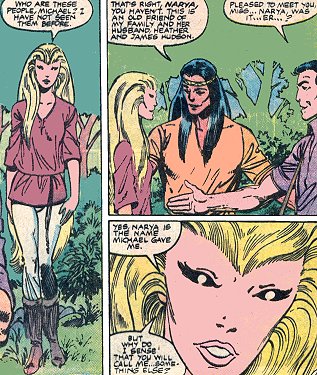 powers.  Narya had never come into contact with any other humans before and was intrigued when Twoyoungmen was visited by his old friend Heather McNeil and her husband James Hudson. Though she was actually no more than three or four years old, Narya had already the physical appearance of a young woman about twenty years in age. Strangely when they were introduced, she could already sense that James Hudson would call her something other than Narya.

Narya did not eat with the others that night, she only served the meal and sat at the table listening to the conversation. Being suspicious of Narya because of her alien appearance, Heather Hudson decided to investigate and followed her that night into the woods where she witnessed Narya transforming into an owl and hunting and eating some small animal. Horrified, Heather ran away but the following morning, she and Mac confronted Twoyoungmen about what she had seen. Michael realized that he couldn’t talk himself out of the situation, so he let the young couple in on the truth. He told them that Narya was not only a metamorph, but also a goddess, and that he in fact was a sorcerer. With that, Hudson invited Twoyoungmen and Narya to join him in Department H where they would have a unique opportunity to further explore their abilities. [backstory in Alpha Flight (1st series) #8]

While Twoyoungmen only held a support-staff role in Department H’s early years, she received the appropriate codename “Snowbird” and was part of the very first Department H super-team, dubbed simply “the Flight”. It was there she met and began a close friendship with Wolverine which lasts to the present day.  As Narya’s intellect changes too when she assumes the form of an animal, she is capable of understanding and relating to Logan’s berzerker rages like none 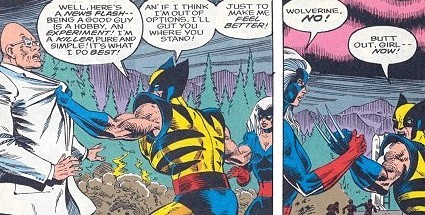 other. When the mad scientist Egghead threatened to launch a nuclear missile at the United States, the untrained Flight members were sent in to deal with him, as no other super hero team could have made it in time. They managed to stop the missile, though at the cost of one team member’s life. Angry that Hudson was teaching Narya to battle super powered adversaries, Twoyoungmen threatened to take her out of the program, but Hudson protested that he could only teach Narya so much and that sooner or later she would have to face some adversaries, as it was part of her purpose. [Alpha Flight Special: First Flight]

Despite Snowbird’s warning that the barrier to the realm of the Great Beasts was extremely weak in that area, Department H allowed Dr. Walter Langkowski to build his research lab there, where he was trying to use gamma radiation to transform himself into another Hulk. Eventually he succeeded, only that he didn’t transform into a green gamma radiated monster, but into an orange-furred ape-like creature. The shock of the transformation was so big that he went on a rampage, though fortunately there were no civilized areas nearby. By the time Snowbird found him, naked and about to freeze to death, he had already transformed back. After he recovered, Walt received the codename Sasquatch, and Narya, only too familiar with the downfalls of shapeshifting - for if one stays in the form of another creature too long, that creatures natural instincts take over - vowed to help Walt leash the bestial nature within his Sasquatch form. [backstory in Alpha Flight (1st series) #11]

With Department H recruiting more and more super-powered individuals, the Flight program was divided into several different levels. Gamma and Beta Flight were for training, while Alpha Flight was supposed to become Canada’s own hero team, comparable to the Avengers for the United States. With Shaman taking a more active role, the mutant twins Northstar and Aurora, and Hudson himself wearing the electro-magnetic suit he designed, the roster seemed complete. [Alpha Flight (1st series) #92]

In order to better contact her, James Hudson created a cover identity for Snowbird, that of "Anne McKenzie,” and in association with the Chief Inspector Cramner, Narya was given the position of

records officer at the District Royal Canadian Mounted Police office. For the identity of Anne McKenzie, Snowbird used her shapeshifting powers to transform herself from her exotic not-quite-human default form - which she most commonly uses - to a full human female form, but whenever an emergency required her attention she was allowed to leave her post. [Alpha Flight (1st series) #15]

Soon afterwards, Alpha Flight made their official team debut at the Calgary Stampede, where they fought the X-Men for custody of Wolverine, who had defected at an earlier point and joined the American X-Men instead. During this battle, Snowbird fought Storm and had no chance to talk to her friend. Alpha Flight did hold their ground in this first battle, but they caused much destruction. Although they managed to capture Logan, he quickly escaped again. Ultimately, the government decided to finally let him go, as they were beginning to fear that they couldn‘t afford an official superhero team and the damages caused by their battles. [X-Men (1st series) #120-121] 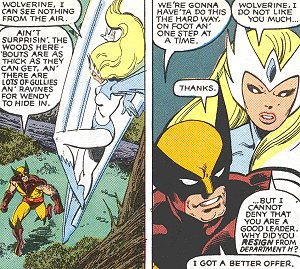 Snowbird was reunited with Wolverine, however, when she, Hudson and Twoyoungmen joined Logan and Nightcrawler to stop the Wendigo, who had been terrorizing the locals at Hudson Bay in Canada. Snowbird did not hide her emotions from Logan as she was clearly still upset about him leaving Department H. When she confronted him about this, he simply told her that he got a better offer.

While everyone else, including Wolverine, failed to stop the Wendigo, Snowbird remembered that physical force – Wolverine and the Hulk – once stopped Wendigo, and despite the dangers to herself, she transformed into a realwolverine, and to the shock of everyone present, she practically ate at Wendigo. 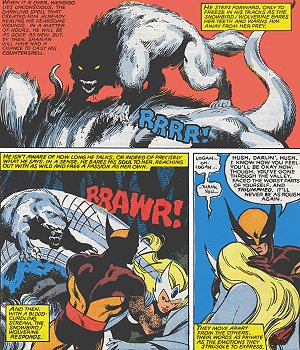 Unfortunately for Narya, the wolverine’s true nature took over. As such, Snowbird stood ready to attack the others to protect her prey. While Shaman prepared to perform a changeling spell to transform Narya back, Logan got to her first, coaxing her to remember who she really is. This worked, and the white wolverine melted away and with a scream, Narya awoke in Logan's comforting arms, sobbing and thanking him. With the Wendigo debacle over, Alpha prepared to leave, with Snowbird hoping and wanting to see Logan again. However, right after they got back, the Canadian government officially stopped funding Department H and the Flight program was closed down. [X-Men (1st series) #139-140]

About a week after Alpha Flight’s official disbanding, Snowbird sensed something evil in the arctic tundra and flew there to investigate. She arrived just in time to see one of her archenemies, Tundra of the Great Beasts, rise, who 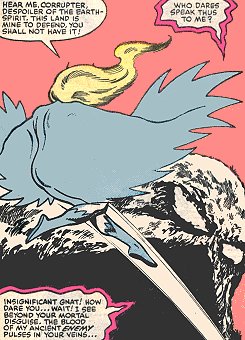 unbeknownst to Narya had been raised from the Earth by her mad father who died in the process. Despite her great powers, Narya worried that if the powers of her family were not enough to destroy the Beast, then how could she, especially as Tundra had power over the animals of the north, so she couldn’t dare to change form. Still, Snowbird challenged him and Tundra sensed within her the blood of his ancient enemies and he attacked her back. Fortunately, Gary Cody, the former team liaison, alerted James Hudson, and through his wife the rest of Alpha Flight, and they all came to aid Snowbird. Their combined efforts defeated the Beast, and in the aftermath of their victory, Alpha Flight decided to remain a team, even without government funding. [Alpha Flight (1st series) #1]

When Alpha Flight fought the Master of the World over Marrina’s fate, Snowbird displayed her many different abilities. At first, as she only found the wreckage of Alpha Flight’s jet, she had to use her post-cognitive powers,  which enable her to replay events of the recent past to learn what happened to them. Using the tracking skills of a 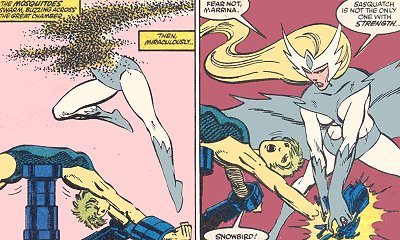 polar bear she followed the team, and in the form of a swarm of mosquitoes, she managed to access the circulation vent of the Master’s base, only to reach her captive teammate faster than any of the other Alphans. Seeing Marrina in serious danger, she switched back to regular form and displaying an enhanced physical strength, Narya broke Marrina free from her shackles. [Alpha Flight (1st series) #2-4]