Elizabeth was out one day with her old friend and foster sister, Heather Hudson, when Heather thought she saw her husband, Mac, the original Guardian, who was supposed to be dead. Talisman did not see Mac, however, but told her teammates that she believed Heather. When Caliber escaped from prison, Talisman was in the vicinity and, in testing her powers, she managed to defeat him. It was then that she first met whom she thought was Guardian. Talisman accompanied “Guardian” and several other Alphans to the West Edmonton mall, where Omega Flight was reported to be on the loose. Talisman went up against Flashback, displaying her haughty personality before being knocked out.

Regaining consciousness, Talisman learned that she had been drugged by her captors. Discovering that who she thought was Hudson was actually Alpha Flight enemy  Delphine 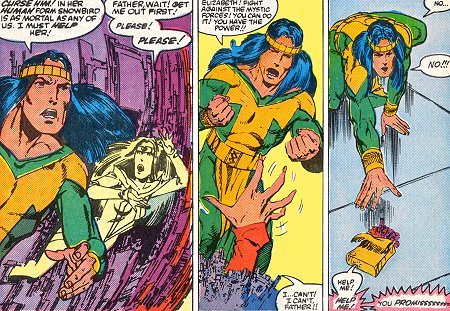 Courtney in disguise, she was forced to contact her father. When Shaman arrived, his medicine pouch was taken by Delphine and turned inside out, trapping most of Alpha Flight inside it. Shaman urged his daughter to go into the void and retrieve them, which she, albeit uncertainly, did. Talisman managed to save the five Alphans trapped inside and, once they were pulled from the void, Shaman went to retrieve Talisman from it. However, he was distracted Delphine holding Snowbird prisoner. Shaman believed he could save both young women and aided Snowbird first. But, in the split second it took to save Narya, the void closed and Talisman became trapped in the pouch, her father failing her yet again. [Alpha Flight (1st series) #25-27] 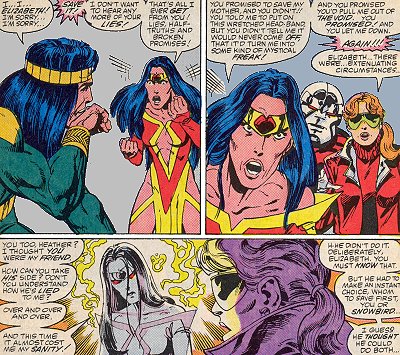 Talisman went nearly insane inside the mystic realm but, fortunately, she was rescued by the near-omnipotent Beyonder, who returned her to Earth. Upon remembering what happened to her, Talisman became furious at her father for failing her now and in the past and also for not warning her that she would never be able to take the tiara off once she donned it. She teleported Alpha Flight back to Vancouver in a fit of rage. [Secret Wars II #4, Alpha Flight (1st series) #28]

Talisman shut herself off from 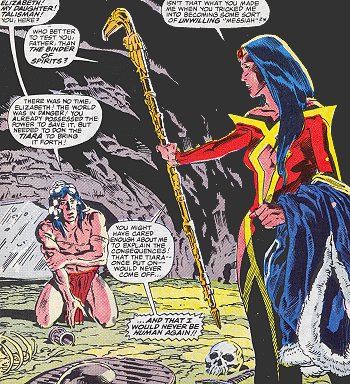 Alpha Flight following this event, only to return to her father when he was undergoing a test of power following the loss of his original powers, as they were based on his faith and self-confidence. Talisman practically forced upon him new powers through which he could control the spirits of nature. Shaman took the powers in the hopes that he could use them one day to release Talisman from the power he had forced upon her. [Alpha Flight (1st series) #35] 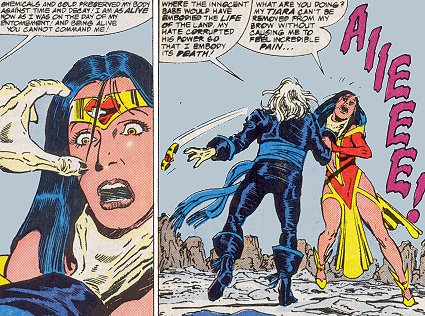 bitter and powerful man, who had been frozen beneath the ice for decades. As Pestilence defeated Alpha Flight, Talisman revealed that this was her plan to make everyone see Shaman fail before she would step in and save the baby. However, Pestilence had his own agenda and, as Talisman attempted to destroy him, he ripped the tiara from her forehead, causing her extreme pain, but freeing her from the power she never wanted.

With Pestilence momentarily distracted by the other Alphans, Elizabeth found the tiara and apologized to everyone for her behavior. Shaman told her it was the power and the mantle of Talisman that came along with the tiara had corrupted her, robbing her of her humanity, but Elizabeth believed it had been her own choice to be selfish and arrogant. She felt that she could control her urges if she became Talisman a second time. However, before she could put the tiara back on, Shaman snatched it from her hand and placed it upon his own brow, as his recent spirit test had proven him worthy of its power. He then temporarily defeated Pestilence with his new abilities. At the sidelines of the battle, Elizabeth feared that her father had sacrificed his own humanity to restore hers and, indeed, he grew more distant and colder. [Alpha Flight (1st series) #37-38]

Elizabeth returned with Alpha Flight to their headquarters, but having abused her powers as she did and now no longer having them, she decided she no longer had a place with the team and practically vanished without a trace to return to her studies. [Alpha Flight (1st series) #41] 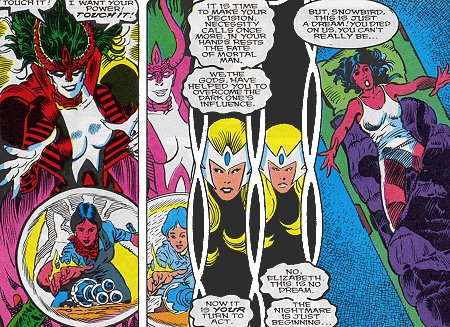 Several months later, while on an archeological dig in the Yukon Territory, Elizabeth felt a surge of power like she once wielded as Talisman, but decided it was impossible, as her father was Talisman now. After discovering a rock formation, Elizabeth believed it housed something. Along with a co-worker, they broke into the cairn, which housed the body of an Indian shaman from over 300 years ago, who at one point had served as a connection to the dimension of the Dream Queen. Elizabeth was rendered unconscious and, from the afterlife, the spirit of Snowbird came to her, showing her the origin of the Dream Queen and warning her of the looming danger to Alpha Flight. [Alpha Flight (1st series) #62, 67]

Elizabeth, however, was 3,000 miles away from Alpha Flight. She tried to phone them, but discovered she was too late, as the Dream Queen answered the phone. A plane flight later, Elizabeth finally reached her former teammates and they exchanged stories. Elizabeth explained that they needed the power of Talisman, now wielded by her father, to stop the Dream Queen. As some of her powers were still within her, she could sense the Talisman’s location and accompanied Alpha Flight to the Eye of the World, to confront her father. Twoyoungmen told Elizabeth that, as the Talisman, he could not do anything to stop the Dream Queen, but Elizabeth

then convinced her father and Heather that she was ready to take back the tiara and the responsibilities that went with it. Shaman agreed, but as he handed the cronet to Elizabeth, Wanda Langkowski, aka Walter Langkowski’s soul in Snowbird’s female Sasquatch, was influenced by the Dream Queen and snatched the tiara. She placed it on her head and started battling Alpha Flight. However, Snowbird’s spirit intervened yet again and prevented Wanda from misusing the tiara any further, by helping to transform her body into that of Walter again, thus breaking whatever influence the Queen had over him. Elizabeth rightfully reclaimed the tiara and once more was the Talisman. [Alpha Flight (1st series) #68] 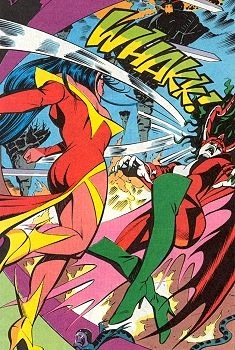 Talisman helped the rest of Alpha Flight struggle with the temptations of the Dream Queen and battle China Force, a group of mutants to manipulated by the villain. Finally, Elizabeth lied to Alpha Flight and sent them to another spot while she went up against the Dream Queen alone and managed to send her back to her own dimension. Vindicator was not happy with her lying to Alpha Flight, but bought Talisman’s explanation that she had to make sure none of them would fall under the Queen’s spell. Talisman officially rejoined Alpha Flight and, at the same time, warned them that it wasn’t over, as the worst was yet to come. [Alpha Flight (1st series) #69-70]