(click on images to see them in a bigger version) 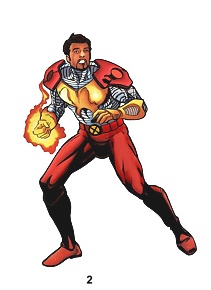 1) After his powers having burned away his clothes in his first meeting with the X-Men, Neal was given the standard blue and gold training uniform that was worn by nearly every member of the X-Men at some time. [X-Men Unlimited (1st series) #27]

2) Shortly after Neal joining, the X-Men adopted new uniforms that were more of a mix of their traditional costumes and battle armor. Neal wore red pants and boots with steel-like mesh body armor. A golden chest plate and red battle armor shoulder pads, along with yellow forearm battle armor, finished off the look. [X-Men (2nd series) #100]

3) After Storm‘s X-Treme X-Men left the mansion, they came up with a set of new outfits, all in the colors red and black, to make them look like a team. Neal sported a black body suit with a low v-neck, short sleeves, metallic gloves, a red belt, and a red thick stripe from his knees to his boots. Like the rest of his team, Neal had a set of sunglasses with special properties (contacting each other, scanning, etc). In addition, Neal shaved off the mustache and goatee he had earlier. [X-Treme X-Men (1st series) #1]

4) As a member of the X-Corporation, Neal has slightly modified his previous uniform. It’s now a dark-blue bodysuit, with a golden v-shaped neck-area, golden belt and boots. The mid-segment of the sleeves, previously left bare, are in the same color. Both shoulders sport an X-symbol. [Excalibur (3rd series) #5]

Fantastic Four vs. the X-Men #1