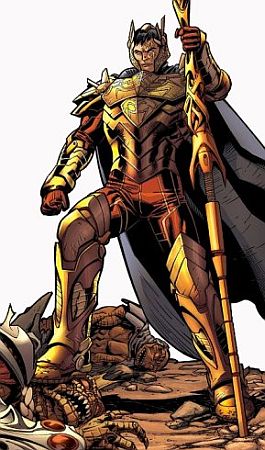 No other X-Man has fallen as far as Gabriel Summers. Consistently let down by those in whom he placed his trust, the darkness festered in Gabriel’s soul until he was unrecognizable as the fresh-faced young man eager to join the X-Men.

First denied his childhood by the Shi’ar, then denied a life with his brothers by Charles Xavier and Krakoa, Gabriel eventually chose his own path and set off on a single-minded journey of vengeance and punishment with a simple creed: he would never be helpless again.

Naming himself Vulcan, for the Roman god of fire, he chose a name that matched both the intensity of his rage and his Omega Class energy manipulation abilities.

The tragedy of Vulcan’s life started before he even entered the world. On an ill-fated family flight from Anchorage, Alaska, the Summers family was attacked by a Shi’ar Imperial starship, which destroyed their plane and abducted Christopher and Katherine Summers. Their sons, Scott and Alex, survived the attack and parachuted to safety. However, little did the boys know that five lives, not four, were destroyed that day; for Katherine was two months pregnant with their brother Gabriel.

Believing his sons had died during the abduction, Christopher eventually freed himself from custody and fought fiercely to save his wife and what he thought was his only surviving child. Amazingly, the human managed to fight his way through to Emperor D’Ken himself, who was tormenting Katherine. However, when he struck at the emperor and failed, D’Ken murdered Christopher’s wife before his very eyes as punishment, just before cutting baby Gabriel, who was weeks away from being born, from her belly.

While Christopher believed the baby was dead, the Shi’ar in fact had placed him in an incubation accelerator and artificially forced his growth to boyhood within a few weeks. This was a common practice amongst the Shi’ar for breeding slaves at the time.  This is exactly 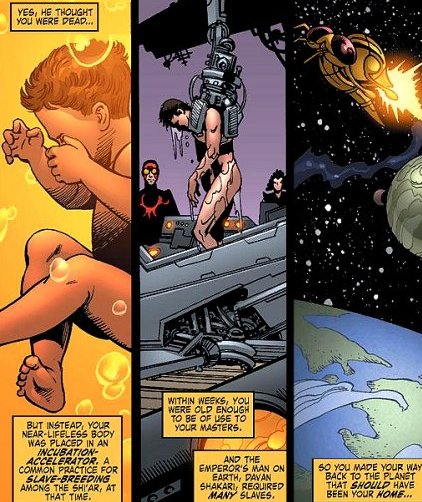 the fate that the Shi’ar intended for young Gabriel. Ironically, the boy was sent to his homeworld Earth to work as a slave in the secret base of Shi'ar spy Davan Shakari aka Erik the Red, in upstate New York. [X-Men: Deadly Genesis #6]

The boy worked as a servant for a number of years, not understanding that he was actually a human in the employ of aliens.  One particular Shi’ar serving Erik the REd, an older woman named Dai’andral, took a liking to young Gabriel.  She provided him with a human book of Roman myths and legends. Gabriel poured over the book night after night after lights out. It was in this tome where he would eventually find his future codename - Vulcan.

Tragedy struck Gabriel once more when, in his teens, his mutant powers manifested for the first time. Not understanding 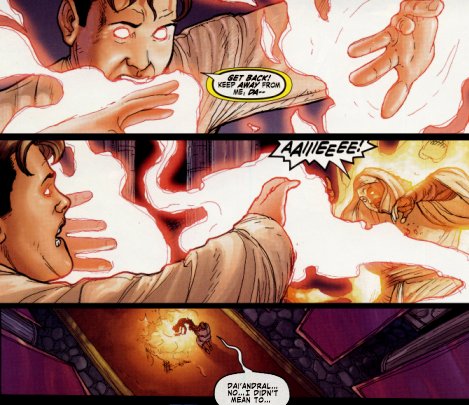 what was happening, Gabriel accidently blasted Dai’andral with energy incinerating her. Fearing for his life, the young man gathered up the only thing he cared about, his book of mythology, and fled the secret base, killing several Shi’ar guards with his energy powers in the process. [X-Men: Deadly Genesis #4]

Lost and confused, Gabriel spent a year homeless until eventually the police found him living in a sewer in New York City. It took everything for the young man not to hurt those two officers and that act of self-control resulted in the happiest period in his tortured life. A month later, presumably living as a ward of the state, he met Dr. Moira McTaggert, who turned his life around... briefly.

Gabriel took an instant liking to Moira. He sensed he could trust the woman, and she didn’t ask too many questions about his past, which he appreciated. Moira brought Gabriel to her research institute, a few hours from Charles Xavier’s school, to live and learn about his powers. He shared the institute with three other young mutants, Darwin, Sway and Petra, all orphans like himself, who fast became the family he had never had. Like his fellow students, he chose a codename, which in his case was very dear to him: Kid Vulcan. [X-Men: Deadly Genesis #4] 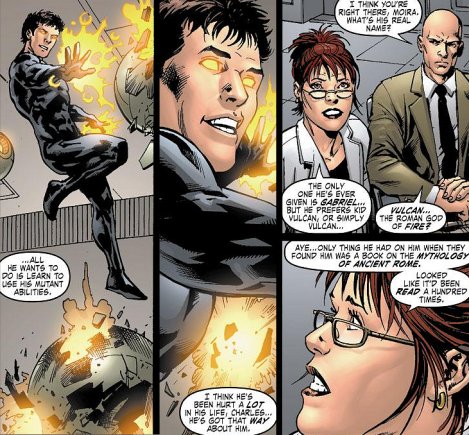 Kid Vulcan worked hard to master his abilities, training in various Danger Room-style scenarios under the tutelage of Moira McTaggert, who in return she obtained valuable data for her genetic research. Soon after coming to the institute, she introduced her young ward to her friend Professor Charles Xavier, who took a special interest in the boy. Gabriel’s memories of his time prior to coming to the institute were locked away in his mind and the professor believed that, until he unlocked them, the boy would never reach his full potential. He aided Gabriel in his mental conditioning, helping to unlock his more painful memories, which in turn caused the boy to experience painful nightmares. Little did Gabriel realize that Xavier had an ulterior motive for getting inside Gabriel’s head; upon meeting the young man, he instantly recognized there was some connection between him and his own ward, Scott Summers.

Xavier went as far as to bring Scott to Moira’s institute to train with Gabriel so he could see the two of them together. When he was finally able to compare their brain patterns side by side, Xavier recognized the truth: they were brothers. For whatever reason, Charles decided against revealing this information to the pair, perhaps because he was still working with Gabriel to understand his origin. Meanwhile, Kid Vulcan was excited to meet one of the X-Men whom he idolized. Later, he overheard Xavier and Moira discussing him and was delighted to hear the professor speak highly of his abilities, and the fact that he could soon be ready to join the X-Men. [X-Men: Deadly Genesis #4] 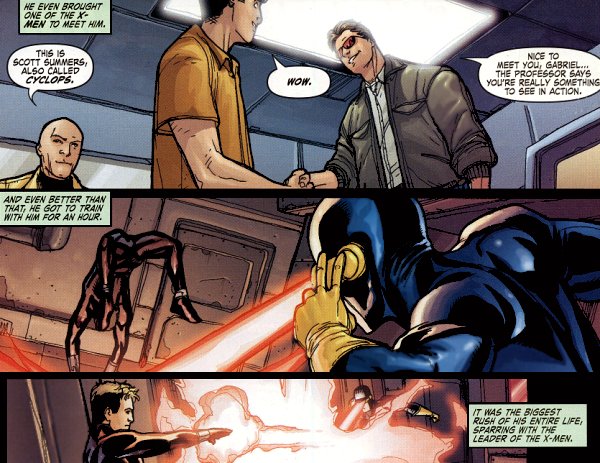 That day came sooner than expected when Professor Xavier came to the institute seeking the aid of Gabriel and his classmates. Xavier’s X-Men were trapped on the living island Krakoa and the Professor was desperate to save them. While Moira was against the idea, Gabriel jumped at the chance to join the X-Men, agreeing to Charles’ request without giving the rest of the group a chance to consider it.

Xavier subjected the group to intense training in the mindscape. In reality, it was only a few days, but to Gabriel he spent months as an X-Man, honing his powers, bonding with his teammates, even graduating and receiving new costumes, all in his mind. [X-Men: Deadly Genesis #4]

Upon their graduation, the quartet were sent in Krakoa on the mission for which they had been training “months.” While a challenge, the quartet fared well at first, fighting their way through the living island until they located and freed Cyclops. Gabriel was nervous but excited to be reunited with his brother and awkwardly revealed their relationship, which Xavier had told him before leaving for their mission.  The orphan had a brief moment of acceptance with his brother before sending him to safety in their jet. 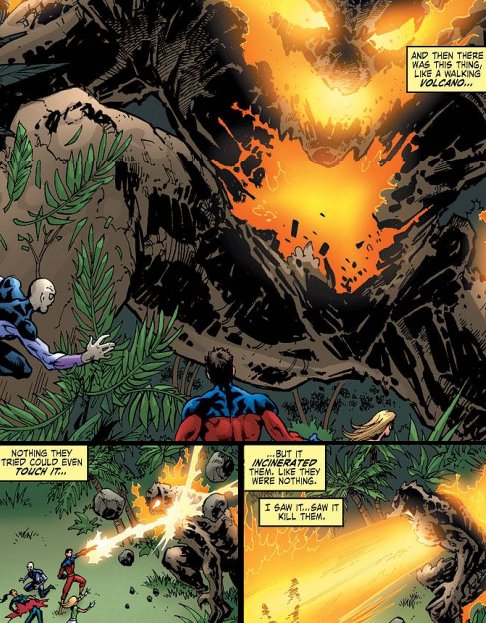 That moment of success and happiness was quickly shattered, as everything turned south after that. Having lost one food source, Krakoa attacked with increased ferocity. A volcano beast destroyed the team, shredding Sway’s body and incinerating the rest. In their dying breaths, each teammate’s abilities interlocked in a sadly serendipitous manner. Sway’s body slowed down the time around them, while Petra swallowed them up in the earth. Instinctively, Darwin’s adaptive powers caused him to merge with Kid Vulcan, also absorbing their friend’s powers.

Xavier was forced to recruit yet another team of X-Men to rescue his original students, who were more successful than Gabriel’s team. Gabriel was sustained near dying, surrounded by the remains of his friends, and entombed within Krakoa as the X-Men hurled the living island into space. To rub salt in the wound, Xavier altered Scott’s memories of the event, erasing any memories of his newly discovered brother. [X-Men: Deadly Genesis #6] 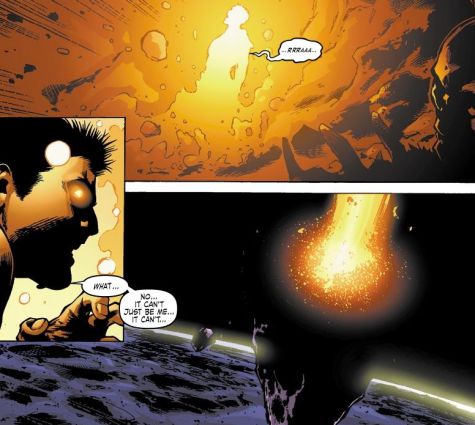 Alone, forgotten and miles above the Earth, Gabriel rested in a state of stasis for years. It was only when mutant kind suffered a massive decimation did he receive a second chance at life. The energy from the depowered mutants surged out of the atmosphere and through the husk of Krakoa, awakening Gabriel and supercharging him to omega class power levels. Gabriel was shocked to find how much time had passed and that he had essentially been abandoned.

Enraged at the Professor, he returned to the Earth on a mission of revenge. The sudden arrival of such a powerful mutant drew the attention of the X-Men, who raced to find him. Rather than reveal himself, Gabriel instead chose to attack, capturing Rachel Grey and Cyclops, attempting to kill Wolverine and stealing their Blackbird. [X-Men: Deadly Genesis #1]

Returning to the only place he’d ever known as home, Moira’s abandoned institute in upstate New York, Gabriel enacted his plan to use Rachel to search for the Professor. Unfortunately for him, they were unable to locate him. Realizing the only way to find the professor was to get his attention, Gabriel took a more aggressive approach. When the X-Man Banshee uncovered Moira’s records of her studies with Gabriel, Vulcan sent the stolen blackbird crashing into Banshee’s commercial airliner, killing the X-Man and everyone else on board. [X-Men: Deadly Genesis #2]

The destruction also served as part of his plan to get Xavier’s attention, as his appearance at the scene made international news. He then dragged his brother Scott to Muir Island, revealing his identity to him along the way. Scott refused to believe it, confused by why he couldn’t remember any of this. Charles Xavier found them shortly after and the rest of the X-Men were soon to follow. Everything was exactly as Gabriel wanted; he would force Xavier to reveal the horrifying truth to his beloved students.

As Xavier had been rendered powerless by the Decimation, he allowed Rachel to share his memories with the group. Finally, all the X-Men learned about Gabriel’s true identity and the truth about what happened on Krakoa all those years ago. In addition, though, Vulcan learned from Xavier unexpected information about his birth and the hand the Shi’ar (and particular Emperor D’Ken) played in it, which stunned and infuriated him. When Rachel Grey recognized that Darwin was still living within Vulcan as an energy form, she managed to extract him from his friend, stunning Vulcan. The X-Men seized the opportunity to strike out during his moment of weakness and, in his rage and frustration, he blasted off into space, his mind flooded with images of the horrors the Shi’ar had unleashed on him. [X-Men: Deadly Genesis #5-6]