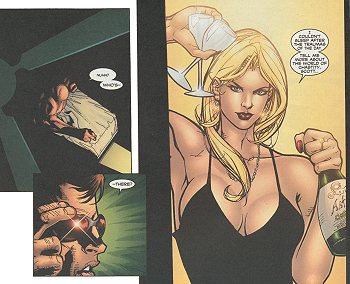 Having nowhere else to go, Emma joined the X-Men full-time and started teaching the many new students at the academy. She quickly became attracted to Cyclops, whose marriage to Phoenix was on the rocks after his nightmarish experience of being merged with En Sabah Nur. During a shared adventure in Hong Kong, Emma tried to seduce Scott - to no avail. However, he found that he could talk to Emma about his problems and fears in a way, he felt, he couldn’t with Jean. With Scott’s wife, Jean Grey, away, Emma, who labeled herself a sex therapist, tried to help Scott with his relationship problems and his mental baggage. As a consequence, they embarked on an odd kind of psychic affair, mentally exchanging caresses, and Emma slowly fell in love with Scott. [New X-Men Annual 2001, New X-Men #128, 131, 139] 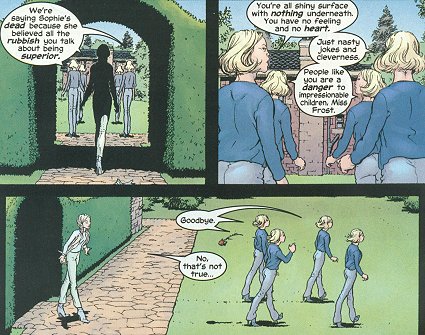 Emma‘s prime pupils were five identical-looking sisters called the Stepford Cuckoos, who could form a telepathic gestalt. During a student revolt at Xavier’s, Emma’s favorite students, the Cuckoos, egged on by some careless witty remarks of Emma, took part in the fighting, resulting in the death of one of the sisters, Sophie. Angrily, the rest of the Cuckoos disavowed Emma, feeling she was a heartless, bad teacher and a danger to children. Dejected, Emma tried to make a new project of problem student Angel Salvadore and looked for comfort in Cyclops’ arms (on the astral plane). Thanks to a tip-off by the Cuckoos, they were discovered by an angry Jean Grey. [New X-Men #120, 126, 134-138] 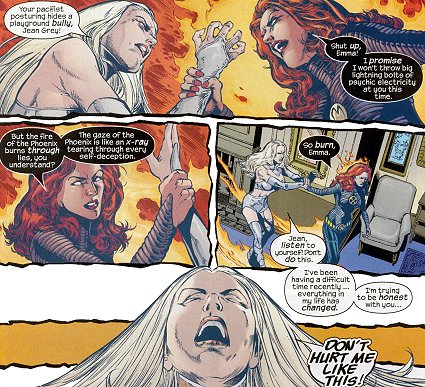 Furious, Jean used the Phoenix power to rifle through Emma’s memories trying to find out what happened between her and Scott in Hong Kong and made her face up to her self-deceptions. The experience left Emma deeply humiliated and emotionally shattered. In the wake of her volatile confrontation with Jean, Emma confessed to Wolverine that she has fallen in love with Scott Summers. Apparently, she hadn’t felt such genuine feelings towards a man for quite some time. [New X-Men #139] 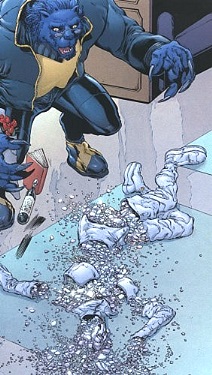 When the Beast stopped by Emma’s room later that evening to try and lift her spirits, he discovered her diamond form on her bedroom floor…shattered into a thousand pieces by a diamond bullet! It was obvious that someone killed Emma Frost, and Xavier asked Bishop and Sage to investigate Emma’s murder. They locked down the school and questioned everyone present. Meanwhile, Hank McCoy worked tirelessly reassembling Emma’s shattered body. As the investigation became more intense, one of the students, Barnell Bohusk aka the Beak, confessed to shooting Ms. Frost. He claimed that he killed Emma to protect his secret: that he had gotten his fellow student, Angel Salvadore, pregnant and that their offspring were monsters. Bishop and Sage quickly realized that Beak was lying to protect Angel, who was the one who actually shot Emma. In questioning Angel, however, the couple discovered that she had been mentally influenced by an outside force into shooting Emma. 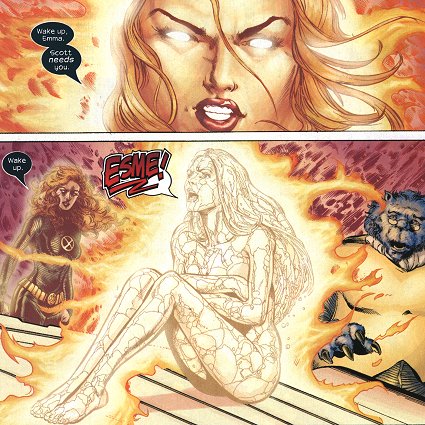 Independently, Jean Grey did some telepathic investigating of her own and realized that one or more of the Stepford Cuckoos were involved. Sensing that Emma’s consciousness still lingered around her shattered body, Jean used the Phoenix Force to fuse the pieces of Emma’s diamond form back together. As Emma’s mind rejoined her body, she called out the name of the true culprit - Esme. However, the truth was revealed a bit too late. When Sage and Bishop confronted Esme about the crime, the skilled Stepford Cuckoo used her mental powers to subdue the pair of mutant detectives, and she left the Xavier Institute with some help from an unseen ally. [New X-Men #140-141] 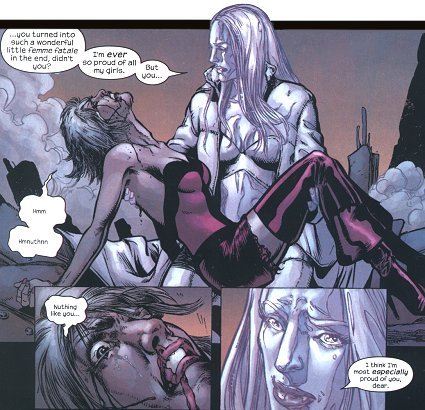 Emma came face-to-face with Esme a short time later when the X-Men face what seemed to be a power-mad and rampaging Magneto. The man the X-Men had known as Xorn was truly an imposter, who now pretended to be Magneto. While part of Xavier’s school, Xorn had recruited Esme and several other students to form a new Brotherhood and destroy the X-Men from within. They almost succeeded in doing though, but Esme wanted more than to be a member of this victorious Brotherhood, she wanted “Magneto“ himself. However, when the imposter didn’t respond to her romantic affections, and even made fun of her, she turned on him. “Magneto“ having no more need for Esme, he brutally slew her. Esme died in Emma’s arms, defiant until the end. Jean Grey was also killed in this climactic battled with Xorn, dying once more in Cyclops’ arms while Emma watched from the sidelines. [New X-Men #150] 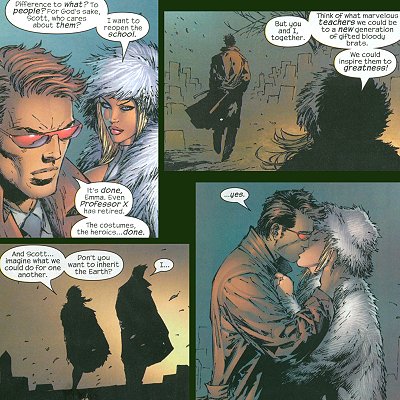 Emma approached Scott before Jean’s memorial to discuss rebuilding the Xavier Institute in the aftermath of its destruction. With Professor Xavier taking a sabbatical to Genosha, the future of the school was left undecided. The two also shared a passionate first kiss at Jean’s gravesite. Initially, Scott wasn’t interested in running the school, preferring instead to try to carve out some time for a life outside the X-Men, possibly with Emma. If not for Jean Grey reaching out from the afterlife and giving Scott a telepathic nudge, he probably wouldn’t have changed his mind and listened to Emma’s reasoning for the Institute still being needed as a safe place for young mutants in a world that hates and fears them. [New X-Men #154-156]

With their blossoming romance out in the open, Emma and Scott now serve as co-headmasters of the Xavier Institute. They have formed a branch of the X-Men dedicated to creating a more positive public presence for mutants by functioning as a more traditional superhero team, complete with form-fitting, colorful costumes. As an active member of the X-Men, Emma continues to try and find her way as a heroine. Her more ruthless approach sometimes creates conflict and the sins of her past continue to haunt her. She is also dealing with the animosity of those she wronged, particularly her teammate, Kitty Pryde. [Astonishing X-Men #1-6]

Scott and Emma also have re-organized a lot of things at the school, for example the student body is now divided in training squads of six members, each assigned to a senior X-Man or member of the teaching staff. Emma too is responsible for a squad, aptly named the Hellions, most of whom she started working with right after the fall-out with the Stepford Cuckoos. For some of the other teaching staff members, for example Moonstar or Wolfsbane, it’s still a bit unusual to work alongside the White Queen, who they remember as one of their archenemies. However, they have at least managed a respectful working relationship, even though they are often disagreements how to handle some specific situation. [New Mutants (2nd series) #8,10, New X-Men Academy X#1-4] 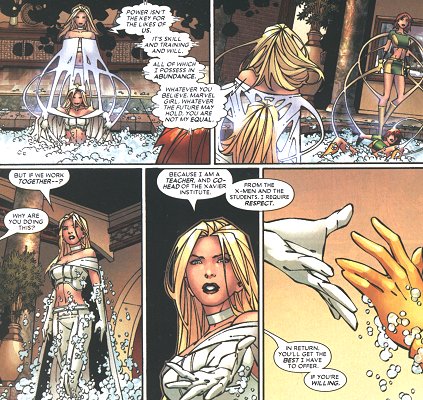 Her romance with Cyclops also caused friction with Rachel Grey, the alternate future daughter of Cyclops and Phoenix. Recently, Emma has been aiding the X.S.E. unit of the X-Men in a case involving the latest incarnation of the Hellfire Club. During this mission, she confronted Rachel (who now goes by the name Marvel Girl) about the tension between them. In a brief battle between the two telepaths on the astral plane, Emma proved to Rachel that Cyclops did indeed love her unconditionally, despite her past and her flaws. She also showed Marvel Girl that she was a far more practiced and skilled telepath by defeating her on the astral plane. The two women have made a tentative peace with one another and Emma has begun to train Marvel Girl in the use of her telepathic abilities. [Uncanny X-Men #452-453]