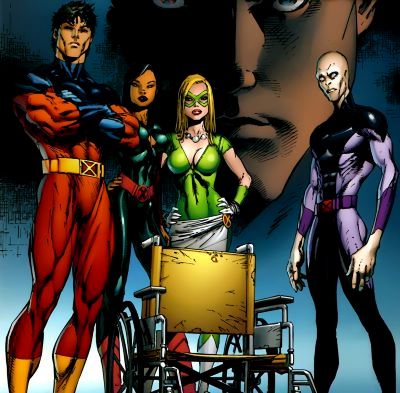 When X-Men (1st series) eventually started printing new material, it was because of the success of the Giant-Sized X-Men #1 issue that had debuted a new team. In the story, the original team had been captured by the “living island” Krakoa and Xavier needed a new team of X-Men to rescue them. However, many years later, a mini-series entitled X-Men: Deadly Genesis revealed that the team that first appeared in GSXM was actually the second team of new recruits Xavier assembled. During the six-issue miniseries, a series of flashbacks revealed the back-story to each of the previously unchronicled X-Men and their failed mission to rescue the original team. Petra appeared in #1, with Darwin in #2, Sway in #3 and finally Kid Vulcan in #6. X-Men: Deadly Genesis #6 revealed that the team had been killed by Krakoa and Xavier had hidden all evidence of their existence, going as far as to mind-wiping Cyclops and Moira MacTaggart, the only other people to know of them. Issue #1 of the series revealed that Kid Vulcan, now simply calling himself Vulcan, was alive in the present and acting as an adversary to the X-Men.

The final issue of the series also showed that Darwin was alive and well, having been saved due to his evolutionary-based mutant abilities. All four were later recognized as being official X-Men, with Darwin going on to re-join the team briefly. 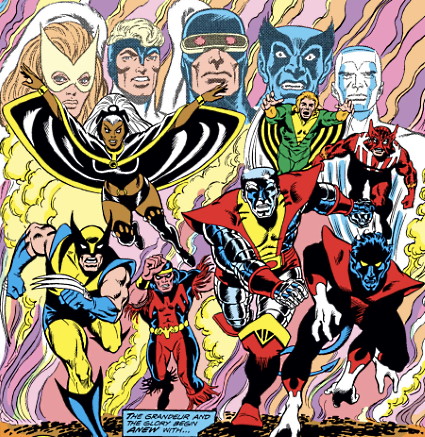 After a few years of X-Men (1st series) re-printing the original run of the series, a brand new chapter in X-Men history was started with Giant-Sized X-Men #1. In it, the original team of Angel, Cyclops, Havok, Iceman, Marvel Girl and Polaris had been captured by the living island Krakoa. Cyclops managed to escape and alert Professor X, causing him to create a new team to rescue his students. After his first attempt with the team depicted in Deadly Genesis tragically failed, he set about gathering a larger group of mutants for a second attempt. Seven new X-Men were introduced, a group consisting of a mix of pre-existing characters and brand new ones, created specifically for the series. The brand new ones were Colossus, Nightcrawler, Storm and Thunderbird, all of whom had brief backstories given to them in GSXM #1. One of the pre-existing characters was Banshee, who had debuted in X-Men (1st series) #28 as a villain. It was revealed during the story that he was being mind-controlled by Factor Three and, after being freed, he remained an occasional ally of the team. Sunfire was the next new member, having debuted in X-Men (1st series) #64, also as an enemy to the team. Unlike Banshee, he wasn’t being mind-controlled; instead he was simply being manipulated into attacking them. The final recruit was 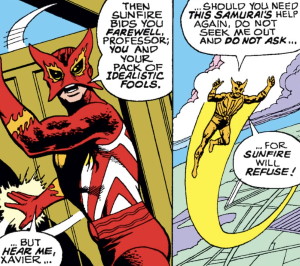 Wolverine, who had first appeared in the Incredible Hulk (1st series) #180 and, at the time, had never met the X-Men before. Later stories would go on to show that he and Xavier had crossed paths on more than one occasion before he joined the team.

With the seven new members, Cyclops led the team back to Krakoa and rescued the rest of the original group. After the success of GSXM #1 new stories in the main series were published with #94. The first thing to address was the very large roster of X-Men now that there were two groups living in the mansion. Sunfire was the first to leave in #94, refusing to stay on the team, as he did not have the same dream for mutant and human co-existence as Xavier did. Angel, Havok, Iceman, Marvel Girl and Polaris decided that they had outgrown Xavier’s teachings and felt it was

time to find their own way in the world. With that, they departed, leaving Cyclops as the only original member, leading a team consisting of Banshee, Colossus, Nightcrawler, Storm, Thunderbird and Wolverine. The team would go on to tragically lose one of its newest members when Thunderbird was killed fighting Count Nefaria in X-Men (1st series) #95.

Despite leaving the team, Marvel Girl still appeared in the title and was one of the mutants who 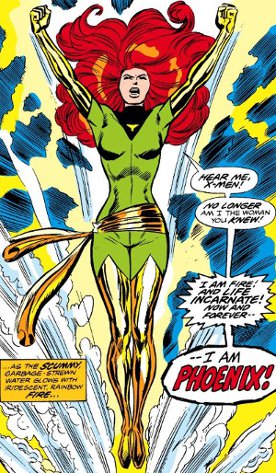 ended up in space, fighting Stephen Lang and his Sentinels. After defeating the villain, the team of X-Men still had to return safely to Earth, a task made more difficult since their space shuttle was damaged. It was only Marvel Girl, thanks to her combined telepathy and telekinesis, who seemed able to pilot the shuttle back to Earth. Despite this, during their reentry into Earth’s atmosphere in X-Men (1st series) #100, Jean was seemingly killed. However, after the shuttle crashed into the river around Jamaica Bay in #101, Jean Grey burst out of the wreckage, declaring herself the Phoenix and shocking the rest of the team who thought her dead. Subsequent stories would go on to reveal that this was not the real Jean Grey, but a simulacrum created by the cosmic entity known as the Phoenix Force. The real Jean was asleep in a cocoon at the bottom of Jamaica Bay and wouldn’t be found for some years yet. Unaware of the Phoenix Force’s machinations, the X-Men took the Phoenix back home to recuperate after her ordeal. Whilst there was never any official re-joining of the team, “Jean” lived at the mansion and began going out on missions with the team once again.

The line-up remained relatively stable for a few years until the Proteus storyline between #126-128. After finding love with Moira MacTaggart and becoming injured from his battle with Proteus, Banshee decided to leave the X-Men in #129 to recover. 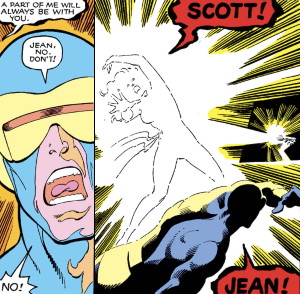 The next roster changed happened when Phoenix died during the X-Men’s possibly most iconic storyline ever, the Dark Phoenix Saga. Taking place between X-Men (1st series) #130-138, the illusionist Mastermind slowly twisted Phoenix’s mind until she snapped and went on an intergalactic rampage, resulting in the destruction of an entire star system. The X-Men, including allies Angel and Beast, tried to stop her but failed. In the end, Phoenix ended her own life in #137, for fear that she would kill more people. Her funeral was held in #138 and was attended by X-Men past and present. In the finale of the issue, Cyclops decided to take a leave of absence from the team whilst he dealt with his grief.