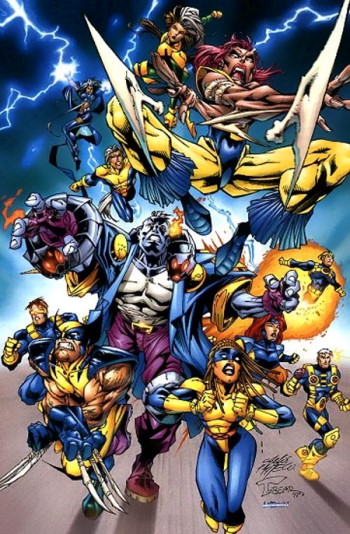 Having helped with his father recovery, Iceman decided it was time to rejoin the X-Men in X-Men (2nd series) #66, only to discover that there were none to be found. When he realized that the mansion’s files on all known mutants has been compromised by Bastion and his Operation: Zero Tolerance initiate, Iceman set off to find those on the list. He found Dr. Cecilia Reyes in a hospital emergency room, where she worked as a surgeon. Unfortunately, Iceman was not the only one interested in Cecilia, as Prime Sentinels had also located her and her mutant status was revealed to all around her, forcing her and Iceman to flee. Debuting in X-Men (2nd series) #65, Cecilia made it clear to Iceman that she wanted no part of the X-Men life and had told Xavier so years before. As the two made their escape, they ran into Marrow, a mutant whom the X-Men had fought not long before. Debuting in X-Men: Prime #1, Marrow had been leader of Gene Nation, until she fought Storm and had her heart ripped out, seemingly dying in Uncanny X-Men (1st series) #325. With the help of the Israeli mutant Sabra, the ragtag group managed to defeat Bastion and his Prime Sentinels. Whilst Sabra parted ways with them, Iceman took Marrow and Cecilia back to the X-mansion. 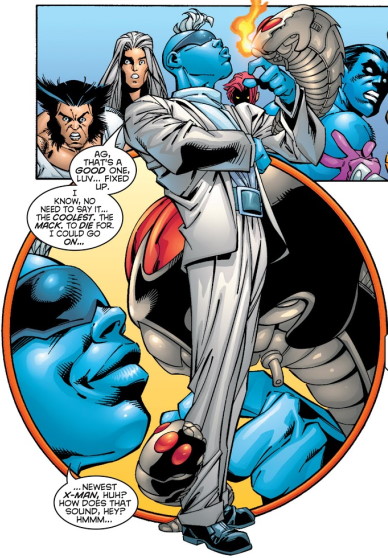 As well as Cecilia and Marrow, there was another mysterious new mutant to grace the X-men’s doorstep and this one was possibly the weirdest yet. Maggott, whose digestive system had become two giant maggots called Eany and Meany, debuted in Uncanny X-Men (1st series) #345. Wanting to find Magneto, he believed Joseph was his target and he tracked the X-Men to New York. Running into Psylocke and Archangel in #349, Maggott briefly fought them before he was dragged into the team’s mission in Antarctica. The team arrived home just as Iceman and his group got there as well in X-Men (2nd series) #70. Maggott, Cecilia and Marrow were all invited to join the team the same issue.

In X-Men (2nd series) #71, now a few years after their marriage in #30, Jean Grey and Cyclops decided to leave the team for a while to concentrate on their relationship. At the time, Cyclops was recovering from having a bomb put in his chest by Bastion, so the two went to Alaska so he could recuperate. Although they still appeared in Uncanny X-Men (1st series), they remained a separate entity from the main X-Men group.

Joseph was the next to leave, having become a target of Sabra, who was looking to make “Magneto” pay for his crimes. When she discovered that Joseph wasn’t the man she thought he was, she offered to help him uncover the truth. Joseph left the team in X-Men (2nd series) #73 and travelled to Israel with Sabre.

The X-Men were soon pitted against the likes of the N’Garai demons and the re-emergence of the Shadow King. During the course of these fights, Maggott had begun to question his place on the team as he continued to struggle with the nature of his powers. Upon advice from Beast, he left the team in X-Men (2nd series) #79 so that he could join Generation X at the Massachusetts Academy. That same issue, Cannonball received word that his mother was ill, so he left the team to go look after her. 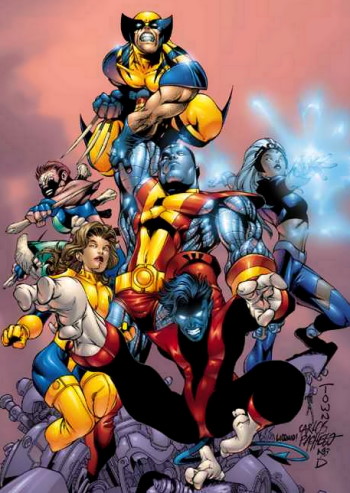 In between the issues of Uncanny X-Men (1st series) #359-360 and X-Men (2nd series) #79-80, the X-Men went through a shake-up. Beast left the team and travelled to Muir Island, where he concentrated on developing a cure for the Legacy virus. Iceman chose to return to caring for his father, who was still struggling with the ramifications of his previous heart attack. Archangel and Psylocke had left the team too in a bid to have a normal life for a while. Cecilia Reyes left as well and set up a medical practice in Salem Center. The only X-Men left were Marrow, Rogue, Storm and Wolverine. Fortunately, a few former members returned to the team, just in time to take on the new threat of a robotic version of Cerebro, which had gained both self-awareness and malevolent intelligence and assembled its own team of X-Men. Shadowcat, Colossus and Nightcrawler had all returned to America when the British superhero team Excalibur disbanded. Joining up with the X-Men, they defeated the villainous team and were welcomed back to the X-Men with open arms in X-Men (2nd series) #80.

On a publication level, there was very little difference between Uncanny X-Men (1st series) and X-Men (2nd series) at this time, as the two books were effectively acting as a bi-weekly comic. Plots from one would be followed into the other and the same group of characters would feature in them both.

Another former X-Man also came back to the team soon after, but he wasn’t as warmly greeted as the others had been. Having been left for dead in Antarctica, Gambit had somehow survived and came to Storm and Kitty’s aid when they were attacked by the Juggernaut in Uncanny X-Men (1st series) #361. Upon Storm’s request, he returned to the X-Mansion but was met with a lukewarm reception from the others, especially Rogue. 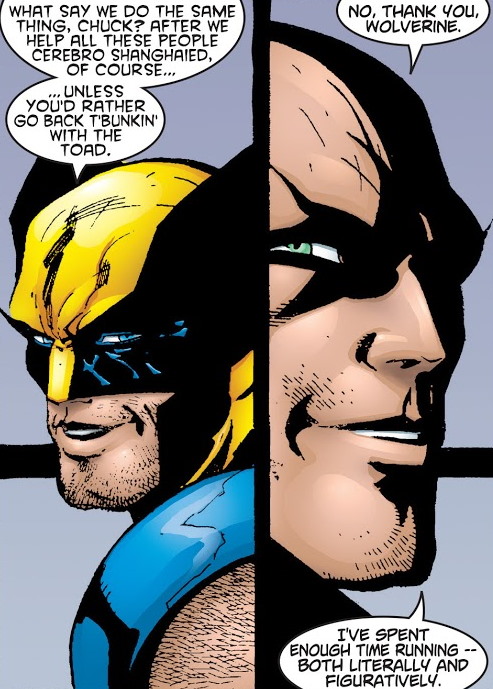 Although yet another former member was to come back to the team, the X-Men had to go hunting for this one. Since his abduction by Bastion, Xavier had been rescued by the Brotherhood of Mutants, who had then found themselves up against this malevolent Cerebro. In the meantime, the X-Men had been looking for Xavier and, when they found him in X-Men (2nd series) #84, he was battling the homicidal robot. Cerebro was eventually defeated and Xavier finally returned to the team he founded so long ago.

This new team didn’t last long, though, as they were dealt a number of devastating blows that made them question their roles on the team. Firstly, Joseph returned to the X-Men’s life in the Magneto War crossover, which revealed his true origin as a clone of Magneto. In the end, Joseph sacrificed his life to save the entire planet against Magneto’s schemes. Given that Magneto had barely been defeated, the world governments opted to give Magneto the island of Genosha to rule over, hoping that a mutant homeland would placate the terrorist.

The blows continued when a trip into space saw the team fail to save the Skrull homeworld from being destroyed by Galactus. Unbeknownst to them, when they returned to Earth, they soon gained an unexpected new member. During the team’s re-entry into Earth’s atmosphere, they encountered a huge electromagnetic pulse that pushed them back into space again and reactivated the ship’s hibernation systems. The team lost a few weeks of time and, when they woke, Professor X sensed someone had infiltrated the ship whilst they slept. 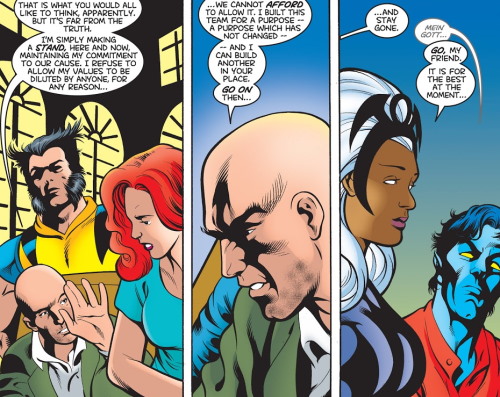 Not able to trust any of those around him anymore, Xavier decided to disband the team in X-Men (2nd series) #92 in a bid to force the mystery infiltrator to expose themselves. Although he was on their trail, at the time Xavier had no idea that it was Wolverine, who had been replaced by a Skrull doppleganger sometime around X-Men (2nd series) #90 and Uncanny X-Men (1st series) #371.

The team scattered, many of them attempted to lead a normal life for a while, whilst others just took a sabbatical, knowing that Xavier would see sense sooner or later.