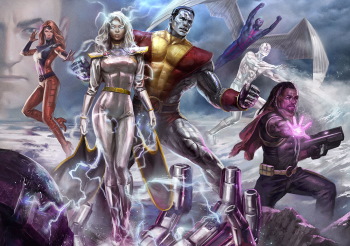 When the original five X-Men, having operated for years together as X-Factor, learned that Xavier was back on Earth and operating with the X-Men once more, they decided to re-join their original team. On top of that, Colossus and Rogue had also come back to the X-Men after being absent for an extended period of time. The team now consisted of fifteen X-Men and the decision was made to split it into two squads, dubbed the Gold and Blue teams.

The Gold team would feature primarily in Uncanny X-Men (1st series), whilst the Blue team would be in the newly launched X-Men (2nd series) title. Since the two squads lived together, it was a common occurrence that members of each team would feature in the opposite title. Forge and Professor X remained as support characters, often featuring in both when the situation required. 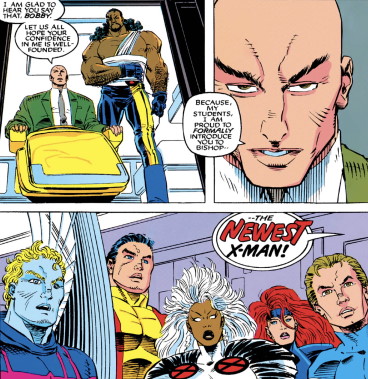 Between 1991 and 1995, the two titles and squads remained relatively separate entities, despite the numerous crossovers like X-Cutioner’s Song, Fatal Attractions, Bloodties and the Phalanx Covenant.

When the Gold team debuted in Uncanny X-Men (1st series) #281, it consisted of Archangel, Colossus, Iceman, Jean Grey and Storm. Their first threat was the time traveler Trevor Fitzroy, a criminal from the future fleeing justice in his time. Hot on his heels was Bishop, another mutant from the future who debuted the very next issue. The X-Men ended up rescuing Bishop and, after learning he was unable to travel back to his own time again, he joined the team in #287. Bishop came with a grim warning though; his knowledge of the future indicted that one of the X-Men would betray the team leading to their deaths. 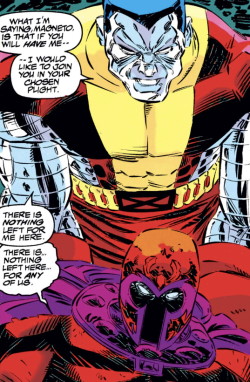 During this period, the X-Men gained a few support characters like Callisto, Mikhail Rasputin and Mystique, who all stayed at the mansion for an extended period of time. Despite them getting involved with the X-Men’s missions, they were never officially inducted onto the team.

Forge was the first to leave the new status-quo when his relationship with Storm hit the rocks. After asking Storm to marry him, Forge realized that she would never truly give herself fully to him and he retracted his proposal, leaving the team in the process in Uncanny X-Men (1st series) #290.

The X-Men were soon to lose another member when Colossus defected to Magneto’s Acolytes in Uncanny X-Men (1st series) #304. Heartbroken over the death of his sister Illyana in #303, he was grief-stricken and blamed Professor X for not doing more to help cure her of the Legacy virus. When Magneto approached the X-Men looking for more followers, Colossus chose to quit the team to follow a new path. 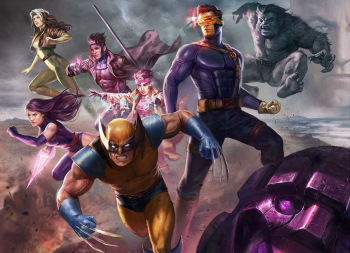 The Blue team debuted in the newly launched X-Men (2nd series) #1 and the initial team consisted of Beast, Cyclops, Gambit, Psylocke, Rogue and Wolverine. Their first mission saw them face off against Magneto and his new Acolytes on board Asteroid M. Although she was still a member, Jubilee didn’t participate in the first mission, instead she joined them in #4 when the team was attacked by Omega Red. 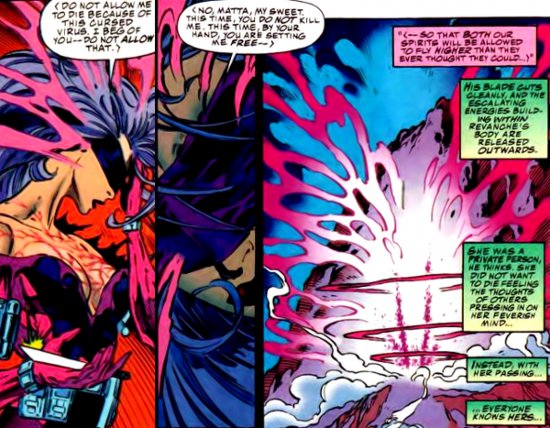 The Blue team remained relatively stable, not losing or gaining anyone else until Revanche came into the X-Men’s lives in X-Men (2nd series) #20. Claiming to be the real Psylocke and calling the current version an imposter, the X-Men were left confused as to who was who. Revanche joined the team in #21 as they travelled to Japan to uncover the truth. Eventually, it was discovered that the sorceress Spiral had merged Psylocke and Revanche’s minds and bodies together, creating two near-identical women. It was soon revealed that Revanche was dying of the Legacy virus, with the disease claiming her life in #31. As she died, all of the memories that Revanche possessed passed to Psylocke, finally making her whole once more.

During the Fatal Attractions crossover, Wolverine again faced off against Magneto, but during this battle had the adamantium ripped out of his body during the fight in X-Men (2nd series) #25. This was a particularly notable moment for Wolverine as it showed him (and the readers) for the first 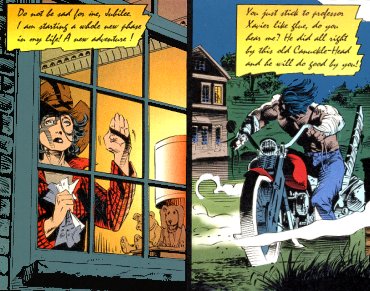 time that he had bone claws under his metal ones. Severely shaken by the ordeal and realizing his healing factor was also compromised, Wolverine left the team in Wolverine (2nd series) #75 to spend some time alone.

It was around this time that the Professor X took in Sabretooth in an attempt to rehabilitate his psychotic tendencies. First appearing in Iron Fist (1st series) #14, the feral mutant had moved over to the X-titles soon after, where he became a reoccurring nemesis to Wolverine in particular. Moving to the X-Mansion in X-Men Unlimited (1st series) #3, the X-Men were divided on his presence there and the two teams made it clear to Xavier that Sabretooth was a prisoner/guest, as opposed to a team member. 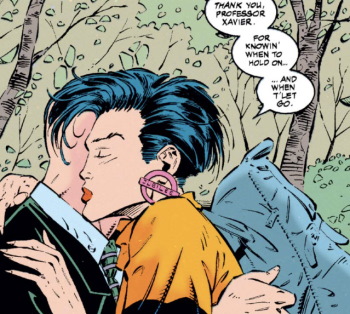 Jubilee was the next to leave the X-Men, much to her dismay, in Uncanny X-Men (1st series) #318. A few issues before, the X-Men were attacked by the Phalanx during the Phalanx Covenant crossover. Jubilee teamed up with some newly emerged mutants, as well as former X-Man Banshee and Emma Frost, who was currently being held captive by the X-Men. Afterwards, Emma and Banshee set up a new school and Xavier decided Jubilee would be better suited with mutants her own age.

Having had enough time to sort himself out, Wolverine returned to the X-Men in Wolverine (2nd series) #90, just in time to stop an escaped Sabretooth from rampaging through the X-Mansion. In a bloody confrontation, Wolverine popped one of his claws through his nemesis’ brain, effectively lobotomizing his archnemesis.