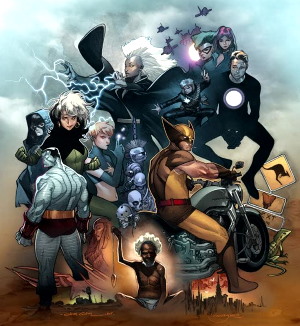 Roma sent the group to a remote ghost-town in the Australian Outback from which they could operate in secret without the world knowing they were alive. Madelyne Pryor made it clear she didn’t consider herself a part of the team but nevertheless remained with them, assisting where she could. At the time the team arrived at their new base, it was being used by the villainous team of cyborg criminals known as the Reavers. After the X-Men defeated the Reavers, Roma appeared and gave the team a gift in the form of the Siege Perilous, a mystical artifact that created a portal which allowed all those who passed through it to be judged and reborn.

As the team got to know their new surroundings, they came across a new ally in Uncanny X-Men (1st series) #230 when they met the Aborigine known as Gateway. With the mutant ability to teleport people anywhere on the planet, he became the X-Men’s main mode of transport around the globe, despite not joining the team himself.

With their enemies believing them gone, the X-Men were free to strike from the shadows. Despite their new lives and operating methods, the team nevertheless slowly started to pull itself apart over time. Madelyne had begun to feel more and more out of place amongst the team and, 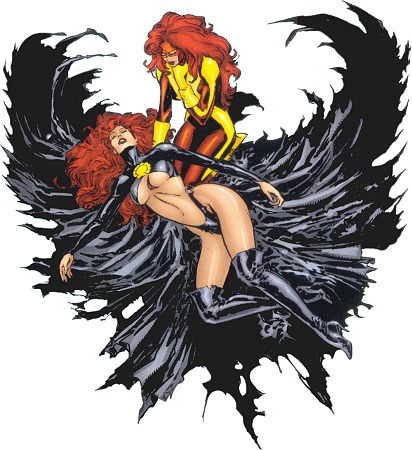 unbeknownst to the rest of them, was falling under the influence of the Limbo demon N’astirh. It was soon revealed that Madelyne was actually the genetic clone of Jean Grey and the news, along with the demonic influence, caused her to snap. Mister Sinister, the crazed geneticist for whom the Marauders had carried out the mutant massacre, revealed himself to be the architect of her creation and very life but even he was not enough to control Madelyne. Now empowered by magic bestowed by N’astirh, Madelyne turned on everyone and attempted to kill her own son in a bid to cast a spell that would let all the demons loose on Earth. In the end, it was down to Jean Grey to get through to her, causing Madelyne to sacrifice herself to stop it all.

The team was shaken by the death of Madelyne but they continued on, despite the wider world having learned they were alive again. They were soon hit with another heavy loss when Rogue was accidentally sent through the Siege Perilous in Uncanny X-Men (1st series) #247 during a fight with the Master Mold sentinel. With no way to get her back, the X-Men were forced to leave Rogue to her fate and hope that one day they would see her again.

Longshot was the next to go in #248, as he had struggled to truly find his place on the team. After a bit of soul-searching, he left the group to go out on his own, in the hopes he would find his place in the world. That very same issue also brought another tragic loss for the X-Men when Havok seemingly killed Storm by accident. The remaining X-Men had been fighting against Nanny and the Orphan Maker, who had de-aged some of them and were looking to kidnap them. As the villains escaped in their flying ship, Havok shot it down but Storm was caught in the crash.

The X-Men were now down to five members, but even then Wolverine had been operating on his own for a while and couldn’t be relied on to stay around. The group’s base was soon attacked again, this time by the Reavers, the very criminals the X-Men had kicked out when they first 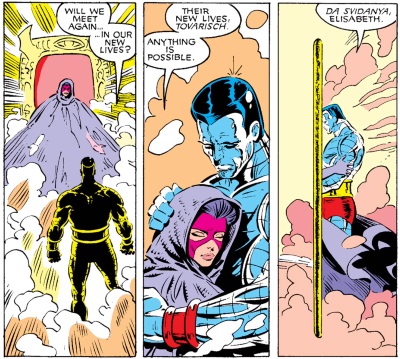 arrived. Led by Lady Deathstrike, the team were well prepared for their fight with the mutants and the X-Men soon found their backs against the wall. With no other option they could see, Psylocke brought out the Siege Perilous and opened the portal in issue #251. To escape the Reavers, Dazzler and Colossus reluctantly went through the portal. Havok was a little more apprehensive, but a telepathic nudge from Psylocke helped him along. Psylocke finally stepped through before the Reavers caught up with her, effectively putting an end to the X-Men.

Wolverine was the only X-Man left in the Outback and was easily overpowered by the Reavers. Fortunately, his life was saved by Jubilee, a young girl who had debuted in Uncanny X-Men (1st series) #244 and had followed the team to the Outback via one of Gateway’s portals. After escaping the villains, Wolverine and Jubilee joined forces and headed off.

The next few issues featured plotlines on various former X-Men and allies, such as Forge, Banshee, Polaris and an invasion of Muir Island by the Reavers. In that time, a group nicknamed 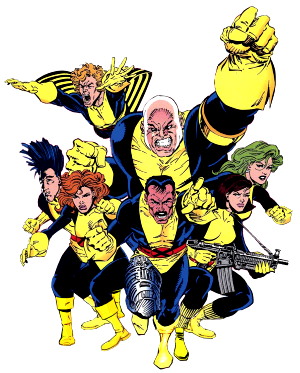 “The Muir Island X-Men” were created to defend the island, but they are not recognized as official X-Men. Formed in Uncanny X-Men (1st series) #254, this team consisted of Alysande Stuart, Amanda Sefton, Banshee, Forge, Polaris, Moira MacTaggert, Multiple Man, Sharon Friedlander, Siryn, Sunder and Tom Corsi. The group fought together during the Reavers’ attack but disbanded once the threat was over in #255.

In Uncanny X-Men (1st series) #253, Storm was revealed to be alive, albeit in a child-like form. It would later be revealed that Nanny and the Orphan Maker had de-aged her during their last encounter and, when Havok blew the ship up, they had used a decoy to make the X-Men think she was dead. She featured on and off over the next year or so, teaming up with Gambit, who debuted in #266.

Psylocke turned up alive in #255 as an amnesic, having washed up on the shore of Japan. Falling into the clutches of Matsu’o Tsurayaba, she was brainwashed and turned into an assassin for the Mandarin, where she crossed paths with Wolverine and Jubilee. After a fight with them both, she regained her memories back and joined the duo on their journey.

Dazzler also found herself washing up on a shore in #259, only this time it was Malibu and she was cared for by Strong Guy and former bandmate Lila Cheney. After recuperating, she decided not to return to the X-Men, opting to try and restart her singing career again.

Colossus also turned up in #259, only he was amnesic like Psylocke, living as an artist in New York under the name Peter Nicholas. He ended up crossing paths with Forge, Banshee and Jean Grey during an altercation with the Morlock Masque. The three former X-Men saw that he had settled into his new life and decided to let him believe he was Peter Nicholas, instead of telling him the truth. 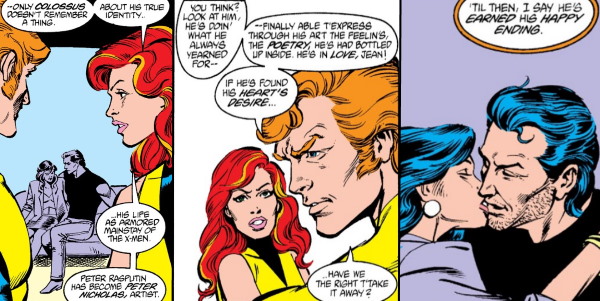 Rogue fell out of the Siege Perilous in #269 but she wasn’t alone. As she had absorbed the powers and psyche of Ms. Marvel many months before, the two were split on exiting the Perilous, each inhabiting their own body. With only one life-force to sustain them both, Rogue found herself in a battle to the death and it was only the intervention of Magneto that swayed the battle in her favor.

Most of the factions that had been featured over the past few years were slowly making their way to New York. Storm and Gambit had arrived at the mansion and met up with Jean, Forge and Banshee, who were also there. The mansion had become the home to the New Mutants, now being led by Cable, but there was still no official X-Men team operating out of there. In Uncanny X-Men (1st series) #270, the start of the X-Tinction Agenda crossover began, which also featured the New Mutants and X-Factor titles. In the first issue, Havok was revealed to be alive and well, having appeared on the island of Genosha after exiting the Siege Perilous. After a number of mutants were kidnapped by the Genoshan Magistrates, the various X-teams descended on the island to take out their leader, Cameron Hodge. Psylocke, Wolverine and Jubilee also came back into the fold during the event, as was Storm, who was now aged to an adult once more, having been in a juvenile form for the past few years. 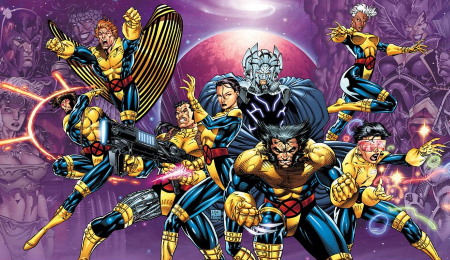 After the X-Tinction Agenda crossover, the various splintered former X-Men all went back to the X-mansion and officially reformed the team again. Gambit, Forge and Jubilee all joined the team for the first time in Uncanny X-Men (1st series) #273, alongside previous X-Men Banshee, Storm, Wolverine and Psylocke. The team was barely getting used to one another when Lila Cheney appeared before them and said that Professor X needed help in space. She teleported the group across the galaxy into the heart of the Shi’ar Empire, where they fought against a group of Warskrulls. The shapeshifting aliens had captured Xavier and replaced him with one of their own. The Skrull-Xavier had brainwashed Empress Lilandra and was essentially in control of the whole Shi’ar Empire. The X-Men managed to defeat the Skrulls and save their former leader, as well as the entire Shi’ar Empire. 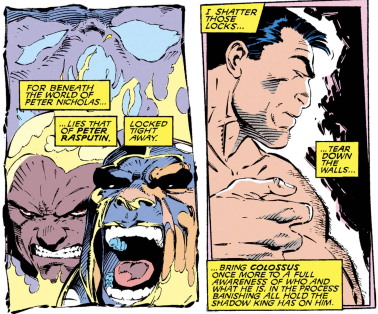