Definition
Limbo goes back to the Latin word limbus and originally meant “hem“ or "border," as of a garment, or anything joined on. Some words derived from the term still carry similar meaning, for example the Italian word lembo (= tip, point, corner) or the English limb. In theological usage the name is applied either to the temporary state of the souls of the just who, although purified from sin, were excluded from the beatific vision until Christ's triumphant ascension into Heaven (the "limbus patrum"), or to the permanent place of those unbaptized children and others who, dying without grievous personal sin, are excluded from the beatific vision on account of original sin alone (the "limbus infantium" or "puerorum").

In Dante’s Divine Comedy, Limbo is used in the same sense, it being the outermost ring of Hell, where souls that are unbaptized but virtuous are sent. According to Dante’s descriptions Limbo has a seven-walled castle, a meadow and a stream, and it’s not that bad a place to be in. However in nearly every other literary usage the name is applied in a wider and more general sense referring to any place or state of restraint, confinement or exclusion, and is practically equivalent to "prison".

Limbo in the Marvel Universe
The Marvel Universe knows several dimensions that at one time or the other have been called Limbo, and while they bear certain similarities and might share some connections, they are different locations.

For a start there is the one true Limbo, ruled by Immortus, caretaker of the timestream, which really is a place outside of time. First shown in Avengers (1st series) #2, this dimension is a vantage point from which all other time periods and timelines may be seen. Within Limbo, time is not linear, and depending on whatever area one is in, it moves at different paces, forward and backward, or is frozen.

Even when standing right next to each other, two people might perceive different surroundings. This Limbo is also home to Tempus, the Space Phantoms and several other races and entities.

Another pocket dimension going by the name Limbo contains some strange plants that seem to serve as food for creatures with a natural ability to breech the dimensional walls and navigate through them. The Inhumans‘ Lockjaw is one of them, for example, and the place is also used by the dragons of Rammatpolen. [Fantastic Four (1st series) #56, Fantastic Four Annual #16] 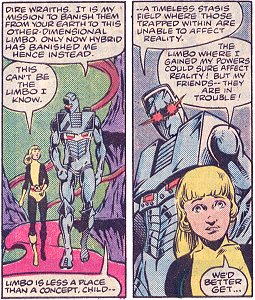 Yet another Limbo is the place where Rom, the Spaceknight has been banishing the Dire Wraiths to with his Neutralizer weapon. According to Rom, this Limbo is more of a concept than a place, a timeless stasis field where those trapped within are unable to affect reality. [Rom Annual #3] Apparently though this Limbo at least shares some connection with the one of Immortus, or might be a part of it, as in later issues several Dire Wraiths have been spotted in the realm of Immortus. [Avengers (1st series) #268, What if (2nd series) #39]

Whatever the case, connected to neither of the places listed above is a fourth Limbo, which this feature is supposed to be about. Also referred to as Otherplace, it was first shown in Uncanny X-Men #160, ruled by Belasco.