Otherplace, also referred to as Limbo, is one of many splinter realms and nether-realms that together make up what qualifies as Hell in the Marvel Universe. The basic laws of time and space do not apply, though it is rather different from Immortus‘ Limbo. Actually Otherplace has a linear timeflow, but due to the many stepping disks floating around and appearing at random, one is able to go back or forth to any point in time. 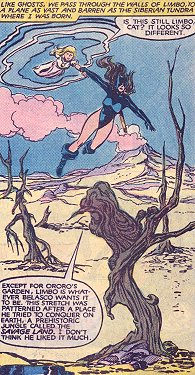 Some of these stepping disks only connect different spots or times within Limbo, while others serve as a means to travel to or from the strange place. These stepping disks can be controlled magically by skilled sorcerers and witches, and Illyana Rasputin had the mutant power to call them up.

The surroundings of Limbo and even the looks of it’s inhabitants depend on whoever is ruling the place. Strong willed people can shape the dimension into whatever they desire it to be, while not so skilled people effect it at least on a subconscious level. Belasco created a castle for himself, and certain desert-like areas were shaped after the Savage Land, where he had been defeated by Ka-Zar. Other regions of Limbo were made of dark caves and tunnel systems. 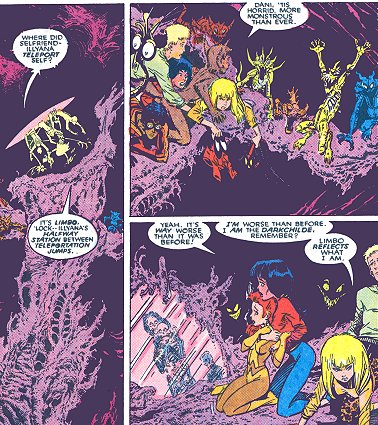 When Illyana overpowered Belasco, she never bothered to change the looks of the place, or maybe she didn’t know that she could. However the further corrupted she became by the black magic she was using, the more Limbo changed too, it becoming darker and more horrifying each time she visited. 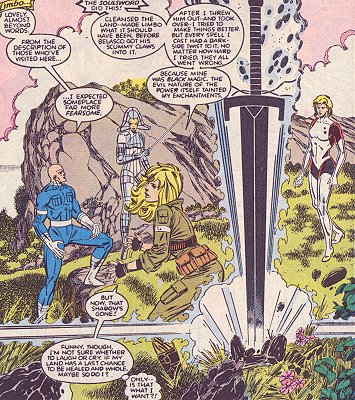 Only by channeling all her magical might into her sword, she managed to temporarily remove anything tainted, causing Otherplace to look like a pleasant place with lots of trees and greeneries.

In the short time Darkoth functioned as Limbo’s ruler, he willed everyone and everything within Otherplace to be at peace, resulting in there being nothing besides him. 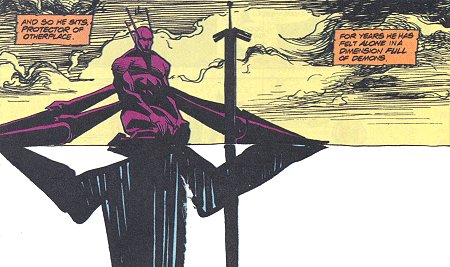